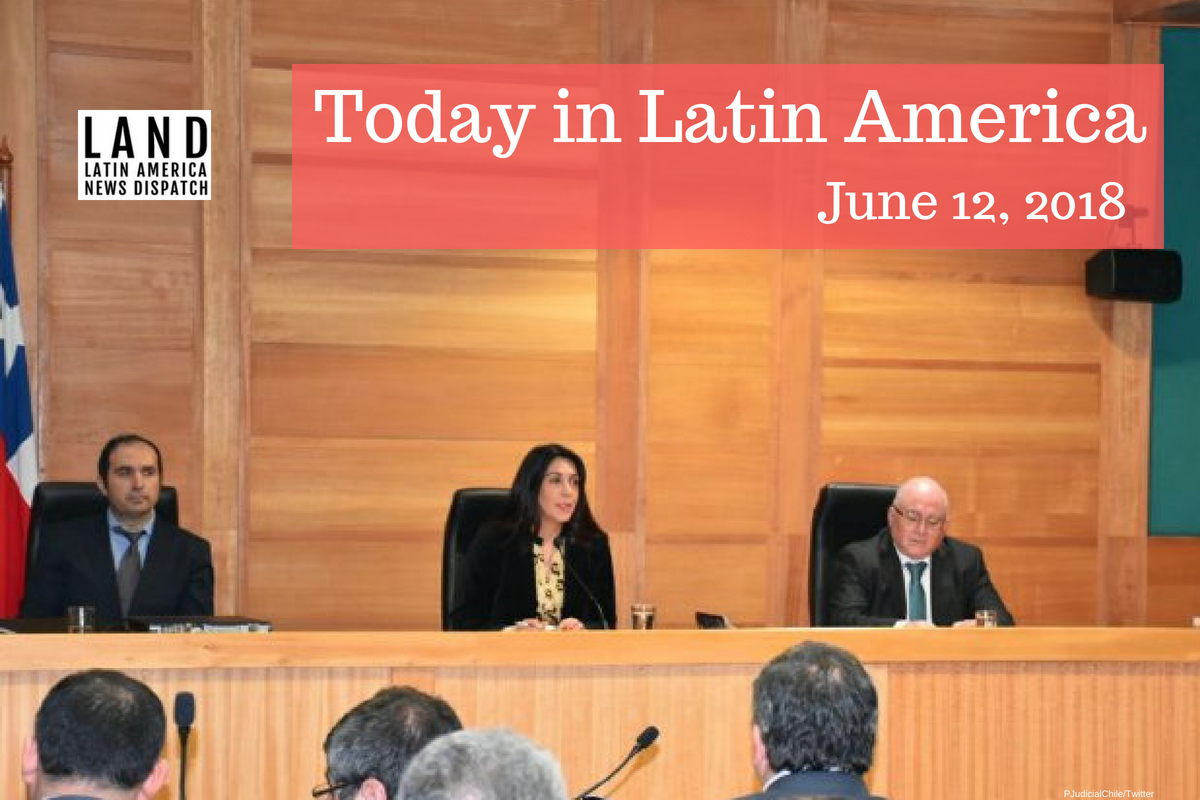 The Oral Criminal Court of the city of Temuco in southern Chile. June 11, 2018. (Photo from @PJudicialChile/Twitter)

CHILE: Two indigenous men belonging to the Mapuche community were sentenced to life in prison for the deaths of Werner Luchsinger and Vivianne Mackay during a fire in 2013. The arson case was tried under Chile’s anti-terrorism laws because Luchsinger and Mackay owned lands that were disputed as Mapuche ancestral territory and has been surrounded by various controversies. In 2013, Francisca Linconao, a traditional Mapuche leader, was charged with and acquitted of illegal possession of weapons after a raid by the police that was rampant with illegalities. Evidence from that raid was still used in 2016 to accuse Linconao and 10 others of terrorism-related charges of arson resulting in the couple’s deaths but they were acquitted after the person on whose testimony the case rested retracted himself and accused the police of having pressured him. Yesterday’s decision by the court to sentence brothers Luis and José Tralcal rested on the testimony of a third person, José Peralino, who collaborated with authorities to get a reduced sentence of five years. Mapuche organizations denounced the trial as unfair.

MEXICO: Mexican-American drug lord known as “La Barbie” was sentenced to 50 years in federal prison and the forfeiture of $192 million by a court in Atlanta. Édgar Valdez Villarreal was born to Mexican parents in the United States on the border town of Laredo, Texas. He was arrested in Mexico in 2010, was extradited to the United States in 2015 and in 2016 pleaded guilty to conspiring to import and distribute cocaine and conspiring to launder money; prosecutors said the $192 million Valdez Villarreal was ordered to forfeit is only a conservative estimate of the value of the cocaine he imported into the United States. La Barbie was a high-ranking member of the Beltrán Leyva gang, and when its leader Arturo Beltrán Leyva was killed by Mexican marines in December 2009 he entered into a bloody fight with Beltrán Leyva’s brother Héctor for control.

UNITED STATES-MEXICO: The Trump administration’s policy of prosecuting people crossing the border without legal papers has led to the separation of almost 1,800 immigrant families between October 2016 and February of 2018, said a government official who talked to Reuters only on condition of anonymity. The official couldn’t get up-to-date statistics but said the number of separations had risen sharply in recent weeks because of the new policies implemented by the Trump administration.

PUERTO RICO: Because of budget cuts to the office of forensic sciences and the great number of pending cases since Hurricane Maria, Puerto Rico’s morgue has run out of room. Legislator Juan Oscar Morales Rodríguez said on Twitter that the situation requires immediate attention.

PANAMA: Former president Ricardo Martinelli was extradited from the United States yesterday and shouted “Long live Panama!” and waved his arms for the press as he was conducted to prison by Panamanian authorities. It is now up to Panamanian courts to determine Martinelli’s guilt on charges of political espionage end embezzlement that he has contested.

NICARAGUA: Nicaraguans are using paving stones to put up up barricades on the streets mirroring 1979 when the Sandinista revolution against dictator Anastasio Somoza was led by now president Daniel Ortega. The police and paramilitary gangs of took by assault several neighborhoods of Managua on the night of Sunday to Monday without any new deaths and of attacked peasants who had set up a roadblock in Las Maderas, 30 miles north of Managua, killing two. Vice president Rosario Murillo lamented the deaths of two police officers during the attack by protesters of a police station in the North Caribbean Coast autonomous region.

COLOMBIA: The ELN rebel group declared a five-day cease-fire starting on Friday to permit the participation in next Sunday’s presidential runoff election. But the coast is not clear as post-paramilitary groups have been terrorizing citizens in regions under their control. The United Nations Office for the Coordination of Humanitarian Affairs confirmed on Thursday that about 3,500 people in Bojayá, Chocó, the site of an iconic massacre where 98 people were killed during a battle between the FARC and paramilitary groups in 2002, have been menaced by armed groups that prohibit movement around the area. And in the towns still under threat by the Hidroituango dam’s possible rupture gangs born out of the old paramilitary groups have also prohibited movement between the towns of Tarazá and Valdivia, Antioquia.

ECUADOR: While a Joint Task Force of Ecuador’s Armed Forces began operating yesterday in the northern province of Esmeraldas, along the border with Colombia, the families of the two Ecuadorean citizens kidnapped by the post-FARC group Oliver Sinisterra are still waiting for news of their loved ones two months after the fact.

CHILE: Pope Francis accepted the resignation of three bishops at the center of the scandal of sex abuse and cover-up by Catholic priests. Last month all 34 of Chile’s bishops had offered to resign and yesterday Francis announced Bishop Juan Barros of Osorno, Bishop Gonzalo Duarte of Valparaiso and Bishop Cristian Caro of Puerto Montt would be leaving: it is expected he will accept more resignations in the coming days. Barros was appointed by Francis in 2015 over the objections of some of Chile’s other bishops and the church’s sex abuse prevention advisers because of accusations against him of protecting Rev. Fernando Karadima from sex abuse accusations the finally caught up with him.

PARAGUAY: The World Health Organization announced yesterday that Paraguay is officially malaria-free, which makes it only the second country in the Americas to have achieved this after Cuba did it in 1973. Paraguay achieved the necessary five years with no recorded cases of malaria while the deadly disease is on the rise globally.