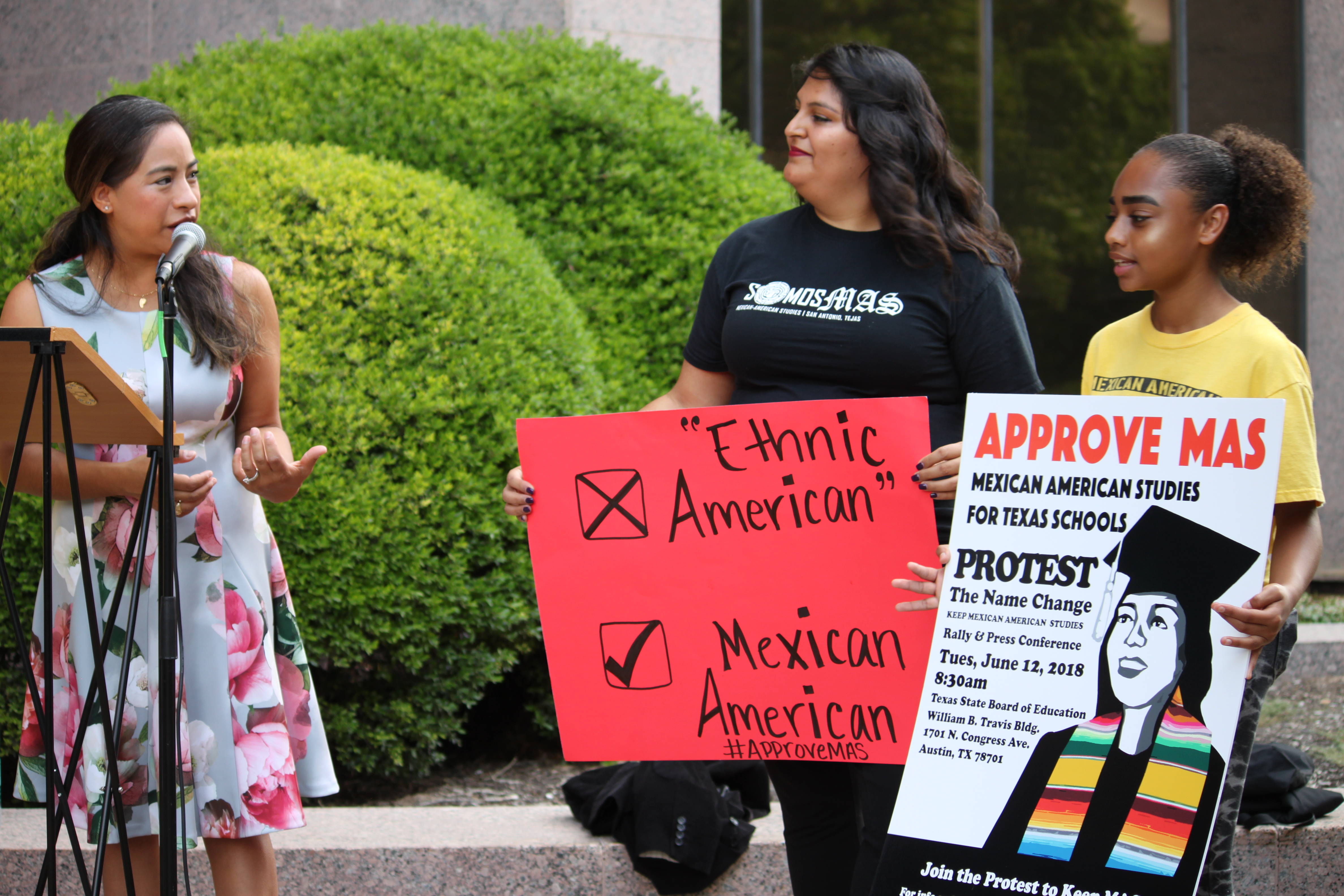 Texas SBOE Trustee Marisa B. Perez-Diaz expresses gratitude on Tuesday toward Texas public school students involved personally in the MAS course name saga, saying they are the country’s future and should be heard and encouraged. (Photo by Christine Bolaños)

In April, the Texas State Board of Education (SBOE) preliminarily approved a standard high school elective course for Mexican American Studies in April just before changing its name to, “Ethnic Studies: An Overview of Americans of Mexican Descent,” thereby removing “Mexican American” from the title.

The board largely approved the name change in April after board member David Bradley, who was absent from Tuesday’s meeting and is a Republican representing Southeast Texas, voiced his concern that “hyphenated Americanism” could lead to divisiveness. Four of the five Democrats on the board, including Marisa Perez-Diaz of Converse, Ruben Cortez of Brownsville, Erika Beltran of Fort Worth and Lawrence Allen of Houston, voted against the name change.

Mexican American Studies or MAS course supporters argued the name change takes away the right from Mexican Americans to self-identify. They said the original name restores dignity and respect to their community and honors the contributions of their ancestors to Texas history, culture and society.

The SBOE remained undecided on whether to change the name back to its original title despite pleas from testifiers during Tuesday’s daylong public hearing. However, the board members were receptive and engaged in constructive dialogue with testifiers. A final decision is expected at the board’s September meeting, though an amendment to change the course name back to MAS is expected on Wednesday.

The course was a culmination of countless organizations, leaders, educators, students and parents banding together since 2013 for fair and accurate representation of Mexican American history and cultural integration into Texas school curriculum. The statewide course will be modeled after the MAS course already in place in Houston school district.

Houston ISD trustees testified in support of keeping the MAS course name Tuesday, while giving the school board credit for a historic decision to approve the class.

“[The proposed course name] glosses over the unique struggles, triumphs and contributions of Mexican Americans since March 2, 1836, when Tejas became Texas,” said Trustee Sergio Lira, adding that more than 300 students take the MAS course in Houston.

He argued the course, with its originally intended name, has resulted in higher student academic achievement and sense of belonging and pride in heritage.

SBOE Chair Donna Bahorich said she’s noticed a variety of people identify themselves in terms such as Latino, Chicano and Tejano, and worries they may feel alienated by a course named MAS. Lira argued that while “brother and sisters” who descend from other Latin American countries have made their own contributions, Mexican Americans have the longest history of connection and contribution to Texas than other Latino groups.

Trustee Marisa Perez-Diaz, who has been a huge proponent of the MAS course, suggested quantifiable data that MAS has resulted in better student performance as an added measure of support.

“We have a fantastic research department at our school district and can come back at a future meeting and bring some of that data. Anecdotally, it’s very positive,” said MAS course coordinator Douglas Torres-Edwards, adding that having Texas Essential Knowledge and Skills (TEKS) standards will now help measure the impact more accurately.

Trustee Ruben Cortez, Jr. said he was inspired to take an introductory MAS course, by this ongoing saga.

He said he plans to introduce an amendment for a course name change on Wednesday. SBOE meetings are held quarterly and typically last three business days.

Following in the footsteps of their peers who spoke at April’s meeting, Modesta Bocanegra and Karen Acuña, two seventh graders at Kipp Camino Academy in San Antonio, testified in support of keeping the course’s original title.

“To me, Mexican American Studies means more than what I read in a textbook. I feel that it doesn’t start with a textbook, but it starts with César Chávez, Dolores Huerta and all those people who made a change not only for themselves, their children and grandchildren, but for their community,” Bocanegra said.

As a biracial child, she has learned to self-identify. “No one can rip that away from me,” she added. “The name change is taking away my name that I’ve given myself.”

Carmen Tafolla, a renowned Chicana writer and professor at the University of Texas at San Antonio, said the moment a student sees themselves reflected in literature or a history book, they have a sudden reason to want to be educated.

“Right now, a lot of kids of diverse cultures feel like when they read history books it’s like standing in front of a mirror and they’re invisible,” Tafolla said, emphasizing the importance of learning about historical heroes they can relate to.

The board ended the meeting immediately after the public hearing Tuesday.