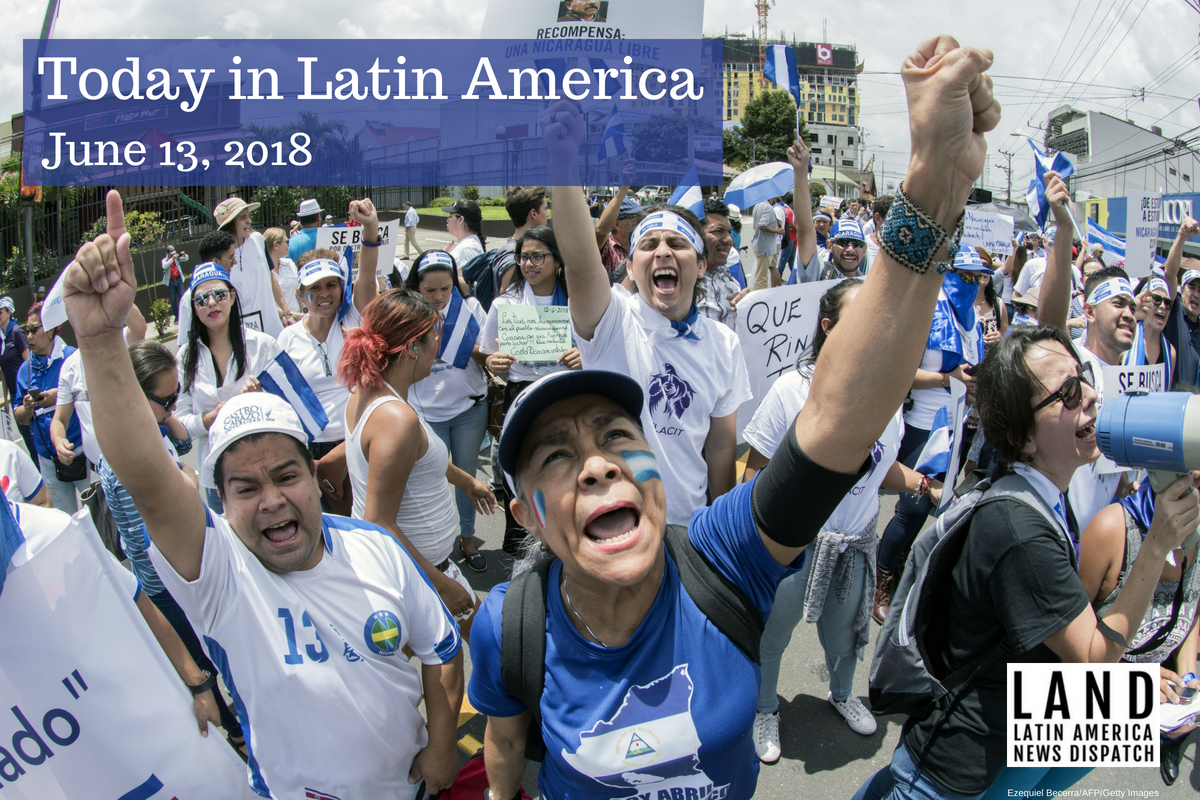 Nicaraguans protest on June 12, 2018, in solidarity with the students arrested and killed in the recent protests against President Daniel Ortega in their country. (Ezequiel Becerra /AFP/Getty Images)

NICARAGUA: At least five people died and 12 were injured in Nicaragua yesterday during the ongoing confrontations. Civil organizations reported the police conducted raids to try to dismantle the barricades set up by protesters in Managua, the capital, and the towns of Jinotepe in the south and Jinotega in the north of the country. Marcos Gutiérrez, one of the fatalities in Jinotepe, was a former Sandinista rebel and now part of the paramilitary groups supporting the police. He died of a single shot to the head with a high caliber weapon, like most of the protesters have died, leading to speculation that he was mistakenly killed by a police sniper. But the government is blaming the protesters for his death and that of another Sandinista veteran and for the kidnapping of three members of the Sandinista Front, the name the paramilitary structures that support the administration of Daniel Ortega have taken.

The government sent a report yesterday to the Inter-American Commission of Human Rights asking it to take into account these deaths and saying protesters in Jinotepe attacked a hospital and a health center and have vandalized the mayor’s home.

UNITED STATES: U.S. Attorney General Jeff Sessions said Monday that immigration judges cannot consider domestic and gang violence perpetrated by non-government actors as grounds for asylum. “No country provides its citizens with complete security from private criminal activity, and perfect protection is not required,” wrote Sessions in the decision that overruled a Board of Immigration Appeals decision from 2016 giving asylum to a woman from El Salvador who fled her husband. The decision is not final as cases will now be sent back to an immigration judge whose ruling can later be appealed.

PUERTO RICO: A judge ordered yesterday to stop the closure of at least nine schools after the Puerto Rico Teachers Association sued the government’s decision to close 24 percent of the archipelago’s schools because enrollment has decreased by 12 percent after Hurricane Maria and is expected to continue diminishing as the exodus to the mainland United States continues.

DOMINICAN REPUBLIC-UNITED STATES: The Trump administration sanctioned a Dominican Republic senator accused of corruption. Sen. Félix Bautista is accused of making millions of dollars from projects to reconstruct Haiti after the devastating 2010 earthquake that he never completed; the U.S. Treasury Department blocked any assets that Bautista owns within U.S. jurisdiction and banned U.S. citizens from doing business with him.

GUATEMALA: The eruptions of Volcán de Fuego have continued. Yesterday the community of El Rodeo had to be evacuated because of heated volcanic mudflows that took the same routes of the bigger eruption from ten days ago.

EL SALVADOR: The ex-wife of former president Mauricio Funes and current Secretary for Social Inclusion of El Salvador, Vanda Pignato, was arrested yesterday as part of the corruption probe against Funes that had led to 25 arrests earlier in the week. Funes, who is exiled in Nicaragua since 2016, did not send legal representation to a hearing held yesterday in San Salvador to determine his legal situation.

PANAMA: Former president Ricardo Martinelli, who was extradited from the United States on Monday, was hospitalized on Tuesday for a crisis of hypertension, coronary artery disease and anxiety. Even though he had been detained in federal prison in Miami for a year and had arrived in high spirits to Panama, his lawyers had requested he be sent to a private hospital because of his health problems raising suspicion from his accusers who say he would not have been allowed to fly if he was in such poor health. Santo Tomas hospital reported that Martinelli was in intensive care and in “stable” condition.

VENEZUELA: Parts of Caracas were left without electricity yesterday for reasons that haven’t been explained. Power cuts have become usual in other parts of the country but are rare in the capital; the government blames the cuts on alleged sabotage but it is also possible they are caused by a lack of maintenance to the electrical system. The day before, the Electrical Workers Federation had called for the second Monday in a row of work absenteeism to protest the crisis of the sector.

ARGENTINA: The most important federation of workers’ unions announced yesterday it will hold a one-day general strike on June 25 to protest President Mauricio Macri’s deal with the International Monetary Fund and the economic policies that it will implement as a result. Also, the teamsters’ union had announced on Monday it will hold a truck drivers strike on June 14.

BRAZIL: The anti-narcotics chief of the Rio de Janeiro police was killed yesterday during a raid in the Acari favela. Rising homicide rates are a major problem in Brazil where the average number of homicides went from 35,000 to more than 54,000 each year between 1996 and 2015 said a study released on Monday by the Brazilian government with contributions from Rio de Janeiro-based think tank Igarape. The study also calculates the costs of criminality meant more than US$119 billion in potential productive capacity were lost during that same period, this is a loss of more than 4.3 percent of the gross domestic product.