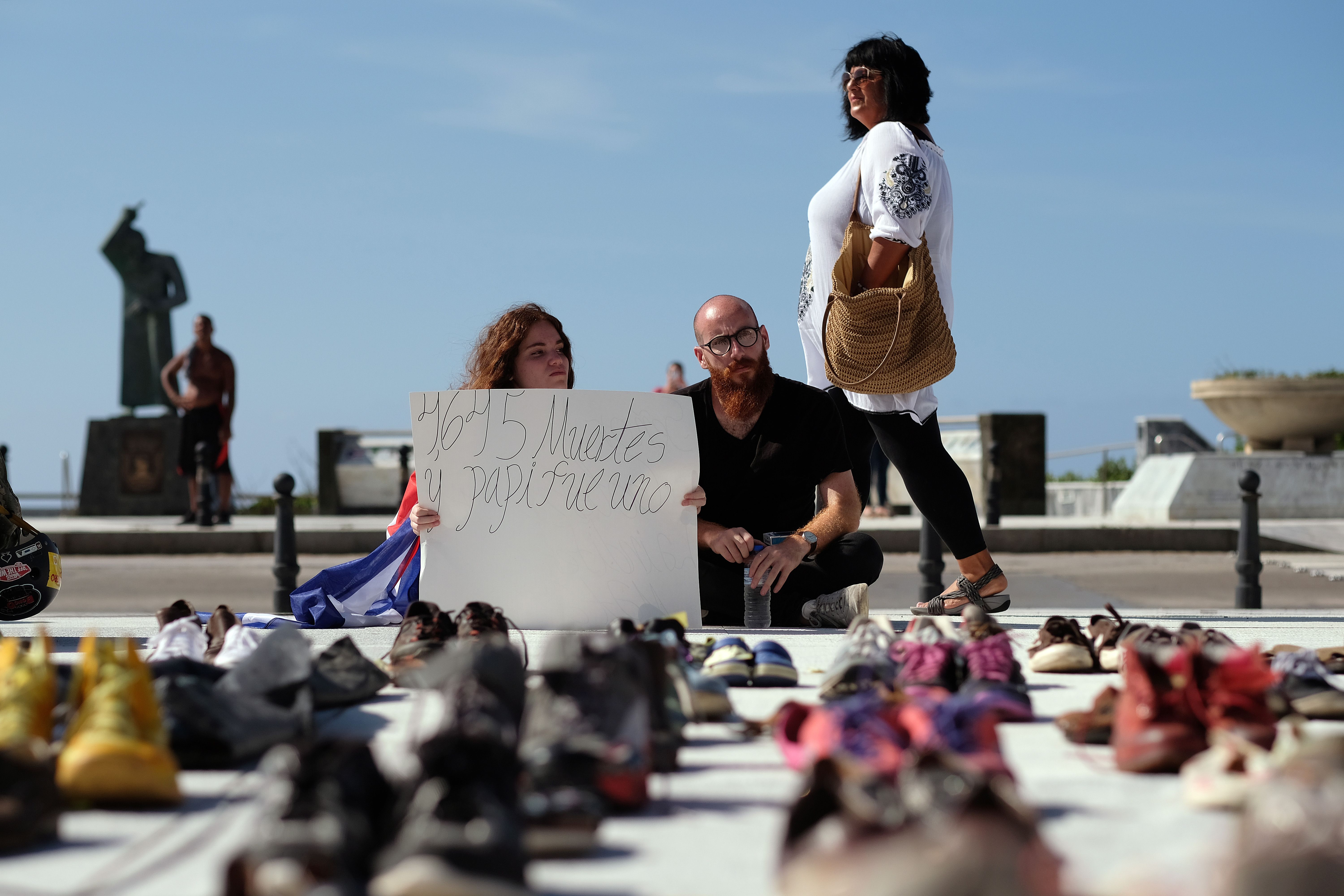 A woman holds a placard that reads in English '4645 deaths and my dad was one them' in front of hundreds of shoes displayed in memory of those killed by Hurricane Maria in front of the Puerto Rican Capitol, in San Juan.  June 1, 2018. (Photo by Ricardo Arduengo/AFP/Getty Images)

Following Hurricane Maria, this question crossed my mind daily. My father lives alone in a rural and remote area of Puerto Rico. He suffers from several chronic illnesses, including diabetes. I knew that he would be without communication for weeks (two went by before I heard his voice). I knew that he would be without electricity for months (it was six, to be precise). What if he suffered a fall? Could he keep his insulin from spoiling?

As it turns out, my concerns were not unfounded. Although my father was safe following the storm, my fears did come true for more than a thousand, perhaps several thousands, of my Puerto Rican brothers and sisters and their loved ones. A study led by the Harvard School of Public Health and published in The New England Journal of Medicine on May 29 estimated that between 793 and 8,498 Puerto Ricans (the midpoint being the now famous 4,645 number) died following Hurricane Maria. The majority of the deaths were due to lack of access to medical services and electricity.

4,645 quickly became a symbol of the trauma and frustration that Puerto Ricans have experienced for the past nine months. It became a symbol of the failures of the administration of governor Ricardo Rosselló’s, both in terms of leadership and accountability. The number made the uncounted dead visible and validated what we all knew: the death count was much higher than the official 64. Most of all, 4,645 has become a symbol of Puerto Rico’s systemic lack of transparency.

How and why did this happen? How could the government so grossly underestimate the number of deaths caused by the worst natural disaster in Puerto Rico’s history? Why does the official count remain at 64 deaths, when multiple investigations and research studies indicate that the number is well above 1,000? Why hasn’t Rosselló — a scientist who campaigned on a promise of transparency — and his officials been more forthcoming with the mortality data?

Unfortunately, Puerto Rico’s issues with transparency and the reliability and credibility of its statistics are not new. In fact, Puerto Rico’s issues with the transparency, reliability, and credibility of its mortality statistics are not new. In 2010 a report by the Puerto Rico Institute of Statistics (PRIS), an independent and autonomous government agency which is under threat of being dismantled, found that the local Department of Health had been erroneously classifying causes of death and undercounting its dead by one percent or about 300 deaths a year, since at least the year 2000. What is more, a recent analysis by demographer Alexis Santos-Lozada of Penn State University indicates that the underestimation of official deaths following a hurricane in Puerto Rico is not new. These chronic problems with mortality data mean that for a while, Puerto Rico’s public health plans, policies, and prevention efforts have been based on incomplete numbers.

On June 1, 254 days after Maria ravaged Puerto Rico, the local Department of Health finally released some mortality data for 2017 and 2018. These data show that there were at least 1,397 more deaths in September, October and November 2017. It is unclear how many of these deaths are associated to Hurricane Maria.

The mortality data, which should have been publicly available, was released by the Department of Health eight months and 12 days post-Maria, following intense public outrage and lawsuits by the Center for Investigative Journalism (CPI, for its Spanish acronym) and CNN, as well as the Puerto Rico Institute of Statistics. On June 5, a court in San Juan, gave the Rosselló administration seven days to release the requested comprehensive mortality information to CPI and CNN.

Why did it take so many months and multiple lawsuits? The director of the Puerto Rico Demographic Registry has said that “the information on fatalities was being analyzed and reviewed to provide it officially and finally.”

This is not only hard to believe, but hard to stomach. It is common for governments to release mortality data that is preliminary. A preliminary death toll would have revealed the scope of the catastrophe, helped determine where help was needed the most, and facilitated requests for federal and international aid. I can’t help but wonder how many of my fellow boricuas are dead because the response was based on a death toll of 64 and not of 1,397.

Having Puerto Rico’s mortality data openly available so that it could carefully analyzed and studied could have helped the government reach a more accurate death count sooner. Yet, officials repeatedly refused requests from media organizations and researchers to have access to the data. Why? Puerto Rico’s Chief of Public Safety recently said that the government wanted to only give the official mortality numbers to George Washington University, which was commissioned by Governor Rosselló to review the death tally, suggesting that the administration is purposefully trying to control access to public information, instead of being transparent.

(The people of Puerto Rico are still waiting for that GW review, by the way.)

The 2018 hurricane season is underway and I question how the government could possibly be ready for another natural disaster if it still doesn’t know how many people died due to Maria, who they were or why they died. As Rosselló outlines and refines his hurricane preparedness plans, I urge him and his administration to not just say but show that transparency is an urgent priority.

Here are some good places to start:

First, follow the court ruling to accurately turn over the necessary requested data. Second, accelerate the adoption of technology and open access to data policies by providing entities like the Puerto Rico Innovation Technology Service (PRITS) the resources it needs to carry out its functions. Finally, desist from dismantling the Puerto Rico Institute of Statistics (PRIS). The recent events around Hurricane Maria’s death toll have highlighted why Puerto Rico needs to ensure reliability and trustworthiness of its data, and why its statistical agency must remain autonomous and independent (as so many organizations and individuals, including myself, have been demanding for months) and have the resources to do its job.

Hurricane Maria revealed —or at least made painfully evident— many of Puerto Rico’s needs. A more resilient infrastructure. Better emergency preparedness. But perhaps the most important thing Hurricane Maria revealed is Puerto Rico’s urgent need for transparency. If we have learned anything from this tragedy, is that when we don’t have transparency and clear data available, people die.