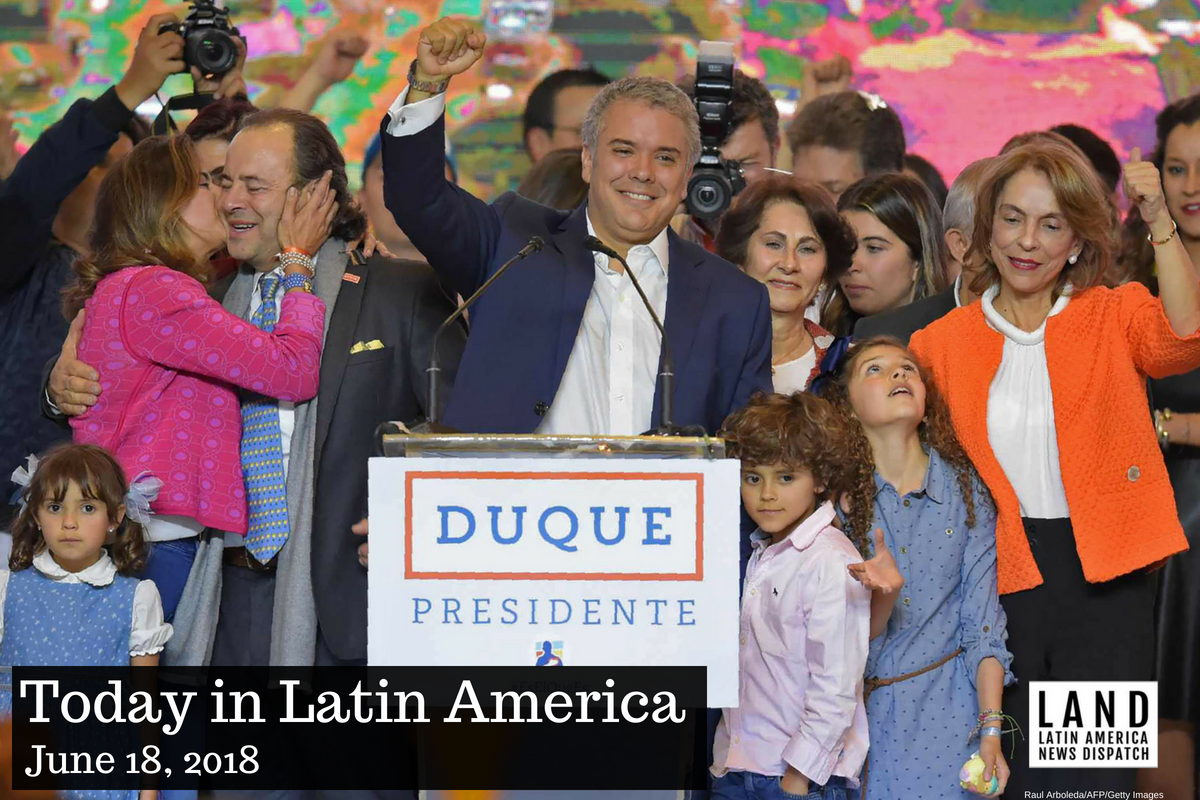 COLOMBIA: Yesterday, Colombians went to the polls and elected young conservative Iván Duque in a runoff vote against former leftwing mayor of Bogotá Gustavo Petro, the winner got 54 percent of the vote while the runner-up got only 42 percent.

A major issue in yesterday’s vote was the contentious peace deal with the former rebels of the FARC guerrillas which won the outgoing president Juan Manuel Santos a Nobel peace prize and record levels of unpopularity. Duque has vowed to renegotiate key parts of the deal which formally ended a war that left 220,000 dead and 7 million displaced but was narrowly rejected by voters in a referendum in late 2016 because it guaranteed seats in Congress for FARC leaders and no jail sentences in exchange for full confessions.

At the age of 41, Duque will be Colombia’s youngest president since 1872.  A market-friendly social conservative, Duque is against gay marriage and legalized abortion and was virtually unknown just a few months ago. He entered the race as the protégé of former president Álvaro Uribe, who hand-picked him for a Senate seat in 2014 and as his candidate for this election. Early in the race, polls were showing “whomever Uribe says” was a favorite to win even before Uribe’s Democratic Center party had chosen a candidate. Uribe is a divisive figure in Colombian politics, he is either revered as the hero who fought and weakened the guerrillas or detested for the grave human rights abuses committed in the name of that fight — including the murder of 10,000 civilians in order to falsely inflate combat statistics and the almost 300 investigations into his involvement in paramilitary massacres, where several key witnesses have ended up dead including one recently.

On the other hand, Petro is the first left-wing politician who has had a real chance of being elected president. He won most heavily in the Pacific region, a part of the country hard hit by the war, poverty and continued violence from drug trafficking gangs. Petro’s promises of land redistribution through state purchases and a move away from fossil fuels have gained him both support and accusations of wanting to turn Colombia into Maduro’s Venezuela. Once an urban guerrilla with the M19 rebels, Petro was a respected lawmaker known for his oratory talents in denouncing corruption and paramilitarism but his tenure as mayor of the capital was controversial. Many deemed his policies populist and financially unsound but lots of others supported him and saw him as a martyr of the conservative establishment when the ultra-orthodox Catholic Inspector General removed him from his post but soon had to reinstate him.

UNITED STATES: Father’s Day demonstrations were held yesterday outside immigration detention facilities in New Jersey and Texas against the Trump administration’s practice of separating children from their parents at the U.S.-Mexico border. U.S. officials said on Friday that between mid-April and the end of May nearly 2,000 children were separated from adults. Seven democratic members of Congress from New York and New Jersey visited a facility in Elizabeth, New Jersey, and the U.S. Border Patrol allowed reporters to briefly visit a facility in south Texas but not to interview any of the detainees or take photos. Melania Trump said through a spokeswoman that she “hates to see children separated from their families” and urged lawmakers from both parties to agree on an immigration reform. And former first lady Laura Bush wrote an opinion piece for the Washington Post where she blamed the policy on the current administration and compared it to the Japanese American internment camps of World War II.

HAITI: Oxfam announced it will have to make $21 million of cuts because thousands of people stopped making donations and the British government suspended its funding after the Haiti sex scandal. Last week Haiti announced it had banned Oxfam GB from its territory because staff members exploited female victims of the 2010 earthquake. The charity said it will try to limit the cuts to its administrative areas and affect its aid programs as little as possible.

NICARAGUA: An arson and a shooting in a barricade left eight people dead in Managua Saturday morning, only hours after President Daniel Ortega and opposition members had agreed on a truce. Civil organizations put the new death toll between 170 and 178. The talks mediated by the Catholic church had led on Friday to an agreement to a cease of hostilities, the removal of roadblocks and the invitation for a foreign inquiry into the confrontations. The government blames “delinquents” for Saturday’s deaths while civil groups are saying the police and paramilitary groups supported by the government were behind the two attacks. The Organization of American States called the arson where six members of a single family died, including two toddlers, a crime against humanity.

GUATEMALA: Authorities put an end to the search efforts for victims of the Volcán de Fuego. The final toll was of 110 declared dead when their bodies were recovered and 197 declared missing, the areas affected by the eruption were declared “uninhabitable and high risk” by CONRED, the Guatemalan disaster agency. The Volcán de Fuego has continued to be active with four or five small daily explosions and shooting columns of ash of up to 15,420 feet above sea level.

VENEZUELA: Seventeen people died and five were injured when a tear gas grenade was detonated inside a nightclub in Caracas as seniors of several different high schools were celebrating their graduation. More than 500 people were at the party at the club known as Los Cotorros but legally named El Paraíso, like the neighborhood where it is located. At around 3am Saturday a fight appears to have started and one of the brawlers seems to have activated the grenade; 11 people suffocated to death and others were crushed by an ensuing stampede. Seven people have been arrested including the owner of the club on suspicion of not checking patrons for weapons, which is a crime in Venezuela.

ARGENTINA: After the Argentine peso fell to a record low of 28.20 per dollar this week, the government announced a cabinet reorganization intended to generate confidence. The president of the Central Bank Federico Sturzenegger resigned on Thursday and was replaced by former head of finance Luis Caputo, while the ministries of finance and treasury were merged  and placed under the control of Nicolas Dujovne, the Treasury minister. The Argentine peso has fallen by 50 percent against the dollar this year.

BRAZIL: The number of shooting incidents in the state of Rio de Janeiro increased 36 percent in the first four months since the military was put in charge of security by President Michel Temer. A report released on Saturday by the Intervention Observatory, a group of independent experts, said “Police and military mega-operations follow each other, each time more in number, with no significant results. So many personnel were never seen, at such high cost, to get so little.”