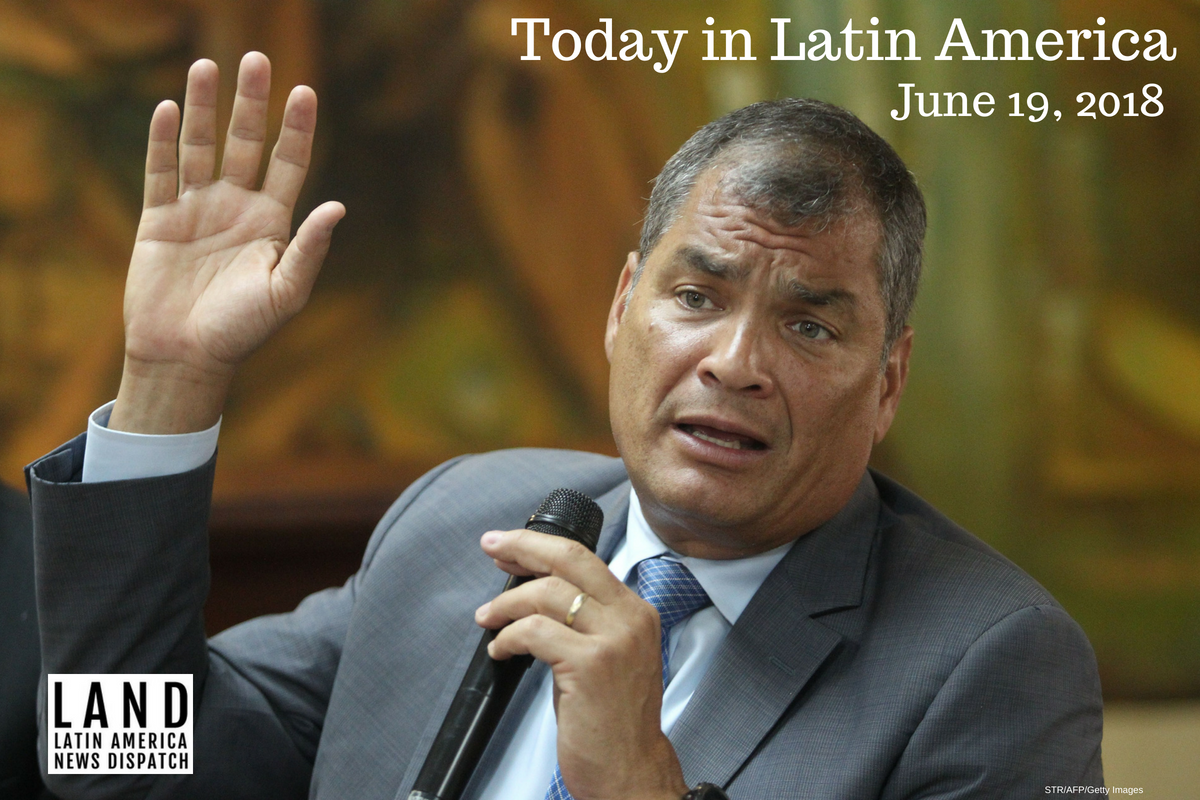 ECUADOR: The National Court of Justice ordered former President Rafael Correa be included in an investigation into the attempted kidnapping by police officers of an opposition lawmaker in Colombia in 2012. A court in Colombia found the would-be abductors of Fernando Balda, a contradictor of Correa at the time he was president, were hired by members of Ecuador’s intelligence agency. Correa has not been charged but has been ordered to present himself in front of the tribunal every two weeks even though he lives in Belgium, where his wife is from. The former president of Ecuador said on Twitter that there are no material proofs of his involvement in the attempted crime because he is innocent and that witnesses have been pressured into incriminating him.

Correa accused the current government of his successor and former ally Lenín Moreno of coopting the judiciary to persecute him and called the government a dictatorship.

On Friday, Parliament had allowed Correa to be incriminated by declaring a petition by Judge Daniella Camacho asking for permission to charge the former president in the probe as inappropriate, therefore implying Correa does not have immunity and asking for the Parliament’s permission is unnecessary.

MEXICO: A former Veracruz state prosecutor was arrested on Sunday for the forced disappearance of over a dozen people. Luis Ángel Bravo served as state prosecutor under Gov. Javier Duarte, who is in jail on corruption charges, and adds to a string of arrests of high law enforcement officials who served under Duarte. Bravo is being accused of helping cover up and hide the bodies of about a dozen people, said current Veracruz Gov. Miguel Ángel Yunes.

MEXICO: Mexico’s governmental human rights commission called yesterday for better investigations into the unusual increase in killings of police and soldiers in recent months. The commission decried the murders of six police officers in the central state of Puebla on Friday by suspected fuel thieves. Last year, fuel thieves drilled illegal taps in Pemex, the government-run oil company, an average of 28 times every day.

UNITED STATES: Donald Trump defended on Monday his administration’s policy of separating children from migrant families crossing the U.S.-Mexican border without legal documents arguing the United States “will not be a migrant camp” and insisting the policy is “very strongly the Democrats’ fault.”

PUERTO RICO: Dozens of organizations and allied countries spoke before the United Nations Special Committee on Decolonization about the crisis the archipelago is since hurricane Maria in September and called for an end to its colonial occupation. The committee approved a draft resolution on the right of Puerto Rico to self-determination, like it does every year.

BARBADOS: Prime Minister Mia Mottley said her meeting last week with Managing Director of the International Monetary Fund Christine Lagarde went well and that a new team from the IMF would be visiting the island in July to negotiate the terms and conditions of a loan.

NICARAGUA: The Catholic Church of Nicaragua decided to suspend yesterday the three dialogue forums created on Friday after the government of President Daniel Ortega failed to prove it had fulfilled its compromise to present invitation letters to the United Nations, the European Union and the Inter-American Commission on Human Rights to act as international observers of the current crisis. Vice President Rosario Murillo blamed the opposition of breaching the agreement to cease the violence by attacking the home of a lawmaker’s mother and kidnapping nine of his family members, requiring the intervention of Bishop Bosco Vivas. The police informed of three new protest related deaths yesterday.

Meanwhile, U.N. High Commissioner for Human Rights Zeid Ra’ad al Hussein urged Ortega to fulfill his promise to cease all violence and to invite his office for a country visit. Formal visits cannot be conducted without a formal invitation.

HONDURAS: President Juan Orlando Hernández met with U.S. Secretary of State Mike Pompeo on Monday to discuss a report by Amnesty International among other issues such as drug trafficking and illegal migration. The report criticizes the lack of accountability of Honduran security forces in the 32 deaths that resulted from protests after President Juan Orlando Hernández’ contested reelection at the end of 2017. State Department spokeswoman Heather Nauert said Pompeo called on the Honduran government to pursue those responsible for the deaths.

BOLIVIA: After a military unit in northern Bolivia was assaulted during the weekend, the government minister Carlos Romero ordered security in several cities along the northern border with Brazil be reinforced. Allegedly, Brazilian citizens attacked and stole arms from the military facility in Bolivia’s Amazon region.

ARGENTINA: New legislation on crimes against transgender people was used for the first time today when a court in Argentina sentenced a man to life imprisonment for the brutal murder of Diana Sacayán, a high-profile transgender activist who was the first Argentine citizen to receive a new national identity card with a gender change. Sacayán was murdered in Buenos Aires in October 2015 by stabbing and Gabriel David Marino had recognized he had had sex with her in exchange for illegal drugs but denied killing her.

ARGENTINA: The wife and son of a senator were found dead on Monday in their home in the northern city of Formosa. Authorities believe the family of Sen. Luis Naidenoff, the head of the governing Cambiémos coalition, died of carbon monoxide poisoning although the official cause of death is still under investigation.