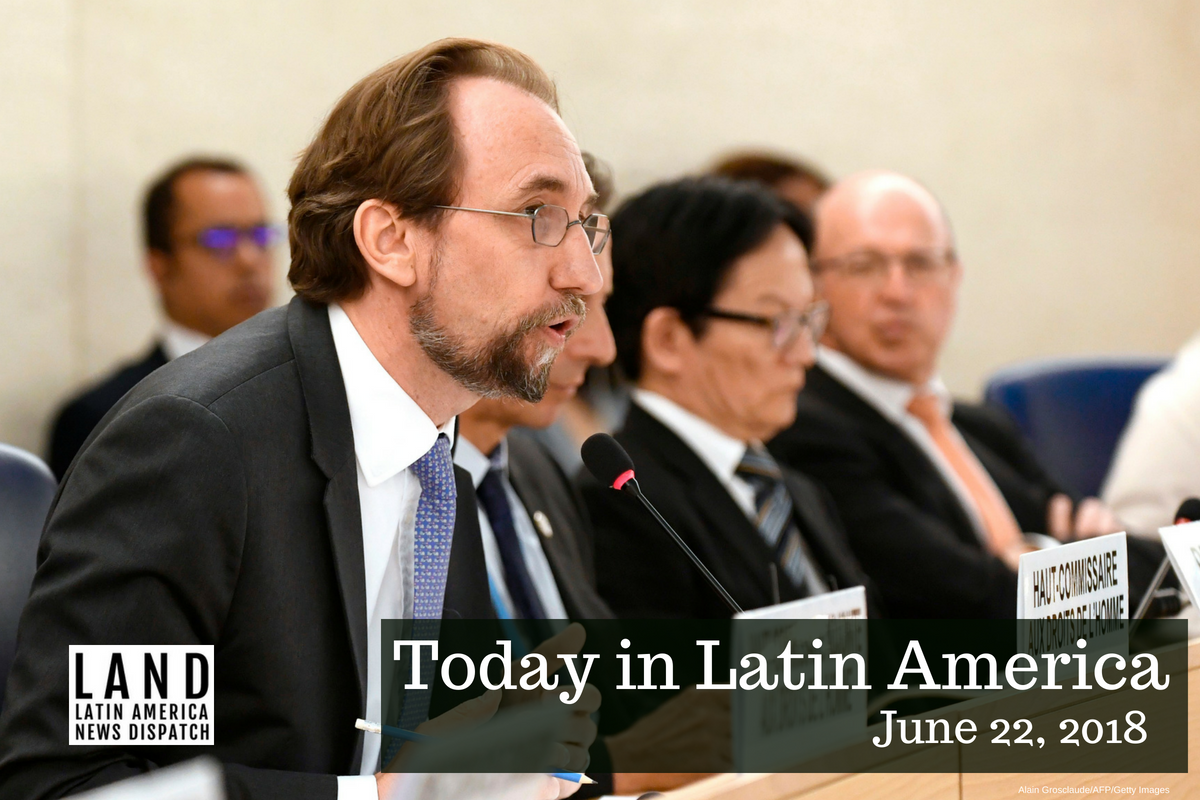 VENEZUELA: The Office of the U.N. High Commissioner for Human Rights released this morning a report denouncing the failure of Venezuelan authorities to hold accountable perpetrators of serious human rights violations within its security forces. The report describes the use of excessive force against demonstrators, arbitrary detentions, ill-treatment and torture and questions why Venezuelan officers accused in some 500 questionable killings appear to be evading any charges. “The failure to hold security forces accountable for such serious human rights violations suggests that the rule of law is virtually absent in Venezuela,” High Commissioner Zeid Ra’ad Al Hussein said.

At the same time, the economic crisis continues to intensify. On Wednesday, President Nicolás Maduro tripled the minimum wage to 3 million bolivars per month plus 2.2 million bolivars in meal tickets, the total compensation will be around $1.98 at the black market rate. The government has deployed soldiers to almost 100 food markets to try to control soaring food prices.

Also on Wednesday, the Paris Club and other private creditors met in France to discuss the eventual restructuring of Venezuela’s debt among other issues. The Venezuelan government and its state oil company PDVSA are in default on most of their $60 billion debt but any restructuring is impossible under current U.S. sanctions which would consider it as illegal financing.

MEXICO: The Federal Electoral Tribunal found Presidential candidate Jaime Rodríguez guilty of campaign irregularities during the process of collecting petition signatures for his independent candidacy and confirmed a fine of about $37,000. Rodríguez, who is widely known as “El Bronco,” was added to the ballot last minute after he had been previously disqualified because most of the petition signatures he presented resulted to be fake. He is currently last in the polls.

MEXICO: Two mayoral candidates were killed in less than 24 hours in the state of Michoacán. Omar Gómez Lucatero, an independent candidate for the rural town of Aguililla, was killed on Wednesday and Fernando Ángeles Juárez, a candidate for the Democratic Revolution Party was killed in Ocampo in the early hours of Thursday. With these two deaths at least 18 mayoral candidates have been killed leading up to the July 1 elections.

CUBA: Cuban journalists told The Associated Press that a new communication policy that gives state media more freedom was recently passed. Independent print or broadcast media is forbidden in Cuba but as internet access continues to grow online sources have proliferated, including independent magazines targeted at millennials and U.S. funded anti-Castro outlets. The policy appears to have been approved when President Miguel Díaz-Canel was still vice president and had responsibility for the country’s media and communications policy and went into effect around the time he took power on April 19.

PUERTO RICO: The president of the Senate, Thomas Rivera Schatz, challenged yesterday the federal control board that took over the archipelago’s finances over a law that protects workers saying the majority of the legislators are not willing to repeal it even as Gov. Ricardo Rosselló insisted his administration would. Meanwhile, Roselló met with President Donald Trump and Vice President Mike Pence in Washington yesterday and asked for Puerto Rico to become a U.S. state to “end with the last enclave of colonialism and validate the democratic will of the Puerto Rican people,” he said.

NICARAGUA: Auxiliary Bishop Silvio Báez and Vatican Ambassador Walter Sommertag went to the city of Masaya yesterday to “avert another massacre,” in Báez’ words. The city, part of the metropolitan area of Managua, has been the center of confrontations between the police, its accompanying paramilitary groups and protesters for the last three days. Civil organizations denounced that armed militias carry AK-47 assault rifles and Russian Dragunov rifles and suggested the training required to fire these might mean Army soldiers in plain clothes or former soldiers might be involved. The Army has denied any involvement in the crisis that has already led to 186 to 215 deaths and at least 60 disappearances according to different NGOs.

HONDURAS: President Juan Orlando Hernández announced yesterday during a trip to Washington that he was accepting the appointment of Brazilian Luiz Antonio Guimarães as head of the Mission of Support Against Corruption and Impunity in Honduras, a creation of the Organization of American States. The previous head of the mission, Peruvian Juan Jiménez, had resigned in February citing hostility from the Honduran government and a lack of support from the OAS, and even though OAS Secretary General Luis Almagro put forward Guimarães’ name last April he wasn’t ratified until yesterday’s announcement.

BOLIVIA: A new government palace was set to be inaugurated yesterday coinciding with the Aymara Indigenous Peoples’ new year, but the celebration was canceled over a controversy about the luxury presidential suite that is said to include a sauna, a jacuzzi and a gym. The 29-story building cost 34 million dollars and took three years to build, and will replace the 19th Century presidential palace that will become a museum.

BRAZIL: A 14-year-old boy wearing a school uniform was killed on Wednesday by a police helicopter that fired near a school during morning classes in a densely populated favela in Rio de Janeiro. Police said that six gang members were killed in the operation that officially aimed to carry out arrest warrants and searches related to the drug trade and cargo theft. Marcos Vinicius da Silva died in a hospital on Wednesday night and residents of the Maré favela protested his death yesterday by blocking the highway that leads to Rio’s international airport and setting a bus on fire. The Intervention Observatory, an independent NGO, has calculated using official data that 444 people were killed by police from February to May in Rio, a 34 percent increase on the previous year.

BRAZIL: Fifteen people were arrested yesterday by Brazilian authorities on accusations of having over billed the state of São Paulo over $158 million for construction works on a major highway that surround the city of São Paulo, the state capital. The case was part of the local iteration of the “Car Wash” probe that has uncovered billions of dollars in corruption. The highest-ranked of those arrested is Laurence Casagrande Lourenço, the former head of Dersa, the company in charge of São Paulo’s highways.