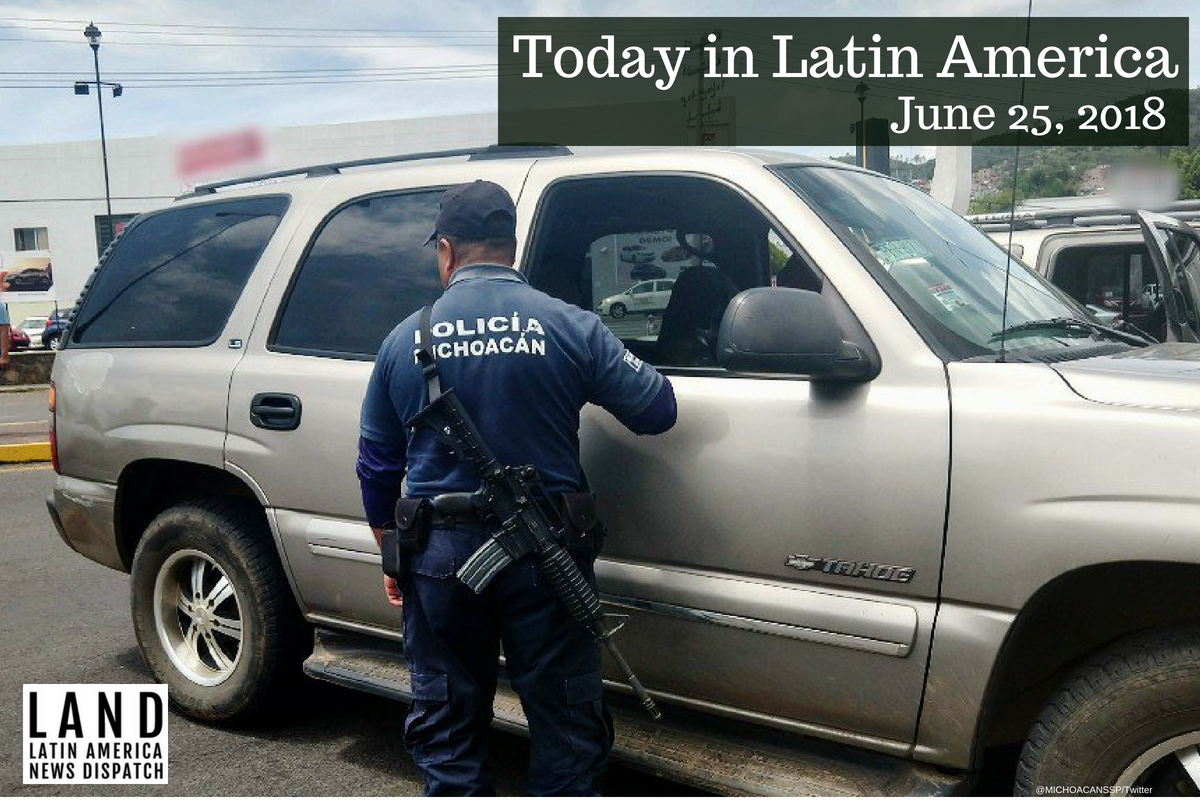 MEXICO: Mexicans will go to the polls on Sunday to choose a new president, federal lawmakers, nine governors and more than 3,000 regional and local posts in the midst of an unprecedented wave of violence. Consulting firm Etellekt will publish a new report later today that says that 46 candidates and pre-candidates have been killed during the electoral season and a total of 122 politicians (including candidates, elected officials and public servants) have been killed since September. In contrast, during the last election season of 2011-2012, only one candidate and a total of nine politicians were killed.

The entire police force of the town of Ocampo in the state of Michoacán was detained on Sunday morning by state forces for preventing the arrest of the town’s public security secretary, Oscar González García, who is accused of being involved in the murder of mayoral candidate Fernando Ángeles Juárez two days before.

UNITED STATES: President Donald Trump suggested on Sunday that undocumented immigrants, whom he called invaders, should be immediately sent back without appearing in front of a judge. The American Civil Liberties Union said in response that this would be an illegal violation of due process and of the Constitution.

MEXICO: Fifteen candidates were disqualified from running for political posts in the state of Oaxaca after Mexico’s electoral tribunal ruled they had lied about being transgender to be able to run as women under gender parity rules that require exactly 50 percent of candidates be women. The tribunal ruled on Friday that the candidates were not known to be transgender, or muxes the third gender recognized by the local Zapotec Indigenous Peoples, before they decided to register their candidacies, but two other candidates who had been disqualified to run by a lower tribunal were ruled eligible as they had consistently identified as transgender. No transgender men are running.

CUBA: The U.S. State Department confirmed on Thursday that medical tests showed that spokeswoman Heather Nauert, one of two Embassy workers who were recently evacuated from Cuba, was affected by the same mysterious disease that causes brain-injury-like symptoms that has affected another 24 fellow Embassy workers. The other worker is “still being evaluated” by doctors.

NICARAGUA: At least seven more people were killed in the protests over the weekend for a total of at least 215 deaths since mid-April, said the Nicaraguan Pro-Human Rights Association. A one-year-old died on Saturday in Managua either at the hands of a “delinquent” according to the police or at the hands of the police according to the baby’s mother. Two died and six were missing during an attempt by authorities to take back the National Autonomous University of Nicaragua from students who took control over it since the beginning of the protests.

EL SALVADOR: The archbishop of San Salvador apologized to a 16-year-old boy who was sexually attacked by a priest. José Adonay Chicas Campos, the priest of Zaragoza a town 12 miles south of the capital, was captured on Friday for the alleged crimes of continuous sexual aggression on an incapacitated minor, paying for sexual acts and aggravated child corruption.

COLOMBIA-ECUADOR: Four bodies were found in southwestern Colombia on Thursday close to the border with Ecuador. Colombian authorities announced the next day that the remains belonged to the three journalists from the Ecuadorian daily El Comercio who were kidnapped and slain in March by a holdout dissidence of the FARC and to a higher-level commander of the group. Ecuadorean authorities said there had not been a “total scientific verification” of the remains and criticized Colombia for leaking the information. The families of reporter Javier Ortega, photographer Paúl Rivas and driver Efraín Segarra expressed their “extreme frustration and pain” at not having been informed directly before the information was published on Twitter.

PERU: For the second time, the Peruvian Congress controlled by Keiko Fujimori passed a law last week prohibiting the government from advertising with private media outlets. Although the oficial purpose of the law is to regulate the state’s advertising spending, Sen. Luis Galarreta, of the Popular Force party that proposed the bill, said it was intended to punish news media that supports the government in exchange for government advertising. The administration of President Martín Vizcarra sued the law as unconstitutional on Thursday.

BRAZIL: The Supreme Court ruled on Friday against a motion by former President Luiz Inácio Lula da Silva asking to be either freed on bail or granted house arrest while he appeals a 12-year conviction for corruption which he denies. Lula’s Workers Party had hoped he would be able to formally launch his campaign for the October presidential election tomorrow.

ARGENTINA: Jailed Mapuche leader Facundo Jones Huala ended a hunger strike on Saturday when prison authorities agreed to allow him to perform a traditional winter solstice ritual that is set to be held later today. Originally, authorities had allowed the ritual to be performed but without the 34 guests that Jones Huala wanted there, after 23 days of hunger strike an agreement was reached for 15 guests to attend the ceremony.