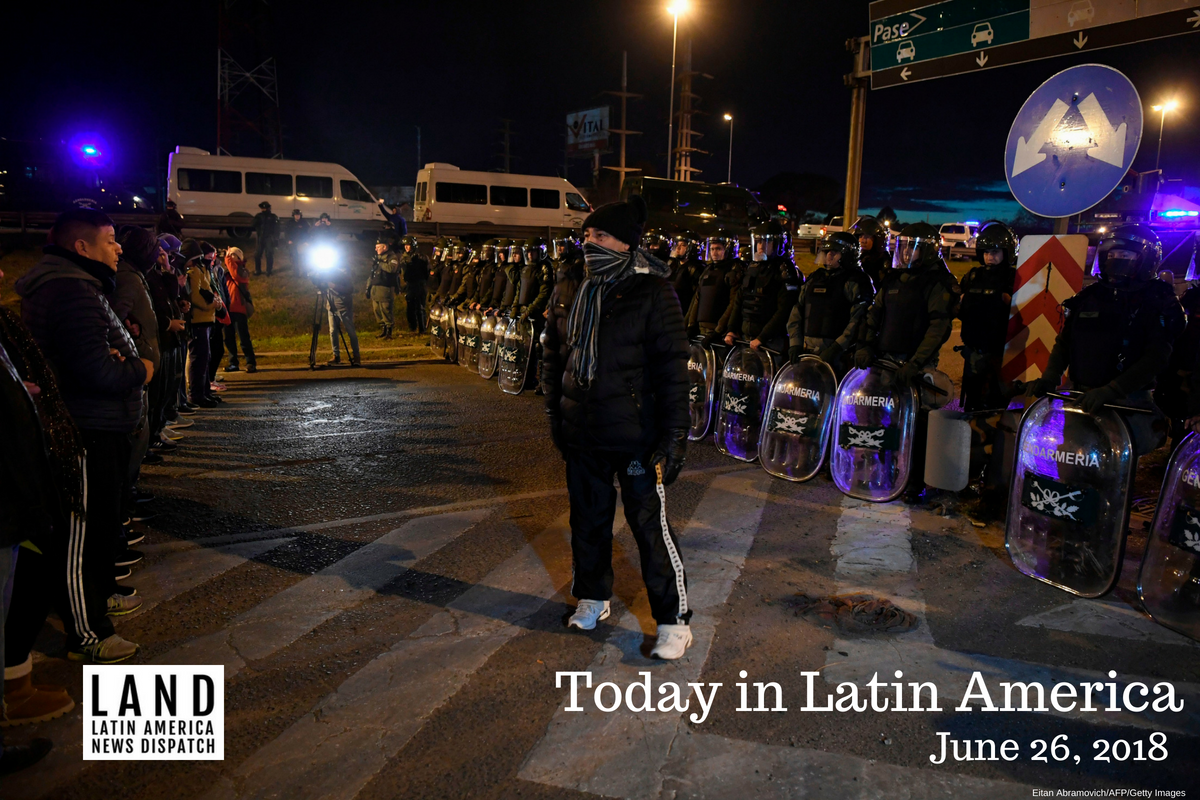 Demonstrators block the Pan-American highway in Buenos Aires on June 25, 2018, during a 24-hour general strike called by Argentina's unions in protest of the government's deal with the International Monetary Fund. (Photo by Eitan Abramovich/AFP/Getty Images)

ARGENTINA: A third general strike led by Argentina’s largest union confederation shut down Buenos Aires and other Argentine cities yesterday. Public transportation, airlines, ports, schools, banks and government offices were closed during the 24-hour strike and although no big demonstrations were organized some protesters closed off roads coming into the capital and other cities. There have been two earlier strikes against President Mauricio Macri’s government in December 2017 and January 2018.

The purpose of the strike was to protest Macri’s decision to turn to the International Monetary Fund for loans in exchange for austerity policies which many blame for the crippling economic crisis of 2001. Workers were also demanding an increase in wages over the 15 percent negotiated at the beginning of the year as inflation is expected to be twice as much and protesting against massive layoffs in the public sector that are exacerbating unemployment. Macri said “The strike does not contribute to anything.” And Labor Minister Jorge Triaca accused the unions of searching for conflict “for conflict’s sake.”

MEXICO: The latest opinion polls show leftist candidate Andrés Manuel López Obrador, known as AMLO, has a support of 37.7 percent of voters ahead of Sunday’s presidential election; Ricardo Anaya, who is backed by a right-left coalition, has 20.0 percent of the votes; the candidate for historically strong and current ruling party P.R.I. José Antonio Meade has 17.7 percent; and independent Jaime Rodríguez, or El Bronco, has 3.1 percent of the vote. The New York Times reported that the P.R.I. paid Cambridge Analytica millions of dollars not because it needed its help to wage a dirty campaign but to prevent it from doing so for its opponents.

ANTIGUA & BARBUDA: The twin island nation said at the Dispute Settlement Body of the World Trade Organization that it is contemplating requesting to the Director-General to appoint a mediator in a dispute with the United States that has been going on for 15 years over the U.S. government efforts to prevent Americans from gambling at online sites based in Antigua and Barbuda. The U.S. delegate answered that his government had offered settling the dispute twice in 2008 and 2013, but the Caribbean island’s ambassador replied the offers then didn’t even total one percent of the losses experienced by Antigua and Barbuda.

NICARAGUA: Negotiations between Daniel Ortega’s government and opposition protesters organized under the name Civic Alliance were reinstated yesterday with the Catholic Church acting as a mediator. Violence continued as the government’s forces tried to take back control over six cities around the country hours before the negotiations were set to begin.

GUATEMALA: The government of President Jimmy Morales said yesterday it will request the United States for temporary protected status for Guatemalan citizens after the natural disaster of the Volcán de Fuego eruption. The request comes at a time when U.S. President Donald Trump’s administration is rolling back similar protected status for other Central American and Caribbean nations. Morales is one of the strongest allies of the United States in the region; Guatemala not only supported the United States’ decision to recognize Jerusalem as Israel’s capital and move its embassy there but became the first country to follow lead and move its embassy too.

VENEZUELA: The European Union added yesterday 11 Venezuelan officials to its sanctions list, including Vice President Delcy Rodríguez, her predecessor and current Minister of Industries Tarek El Aissami and General Commander of the Army Jesús Suárez, but not President Nicolás Maduro. There are now 18 people on the list which prohibits from traveling to the E.U. and freezes assets there. A similar list of sanctions by the United States targets 70 officials including Maduro but not Rodríguez. Venezuela’s foreign ministry issued a statement calling the sanctions an aggression and an interference in the sovereign affairs of Venezuela that is contrary to international law.

COLOMBIA: Coca cultivation rose by 11 percent in 2017 for a record total of 209,000 hectares (516,450 acres) of the illegal crop, said a White House report released yesterday with the latest annual data available. Estimated cocaine production also increased 19 percent to 921 metric tons. Although coca production in Colombia has been increasing since 2013, which coincides with the beginning of negotiations between the government and the FARC rebels, last years’ increase was smaller than that of previous years.

CHILE: News site La Tercera revealed on Sunday that President Sebastián Piñera had issued a humanitarian pardon for René Cardemil, a former colonel convicted of crimes against humanity during the Pinochet era. Cardemill died in prison on April 7 from prostate cancer, a day after the pardon was issued and before he could benefit from it. Piñera held a press conference on Sunday and said: “We want Chile to be a humanitarian country, to have compassion for those who are on the verge of death.” Cardemil was convicted for executing six people in 1973 and was sentenced to 10 years in prison.