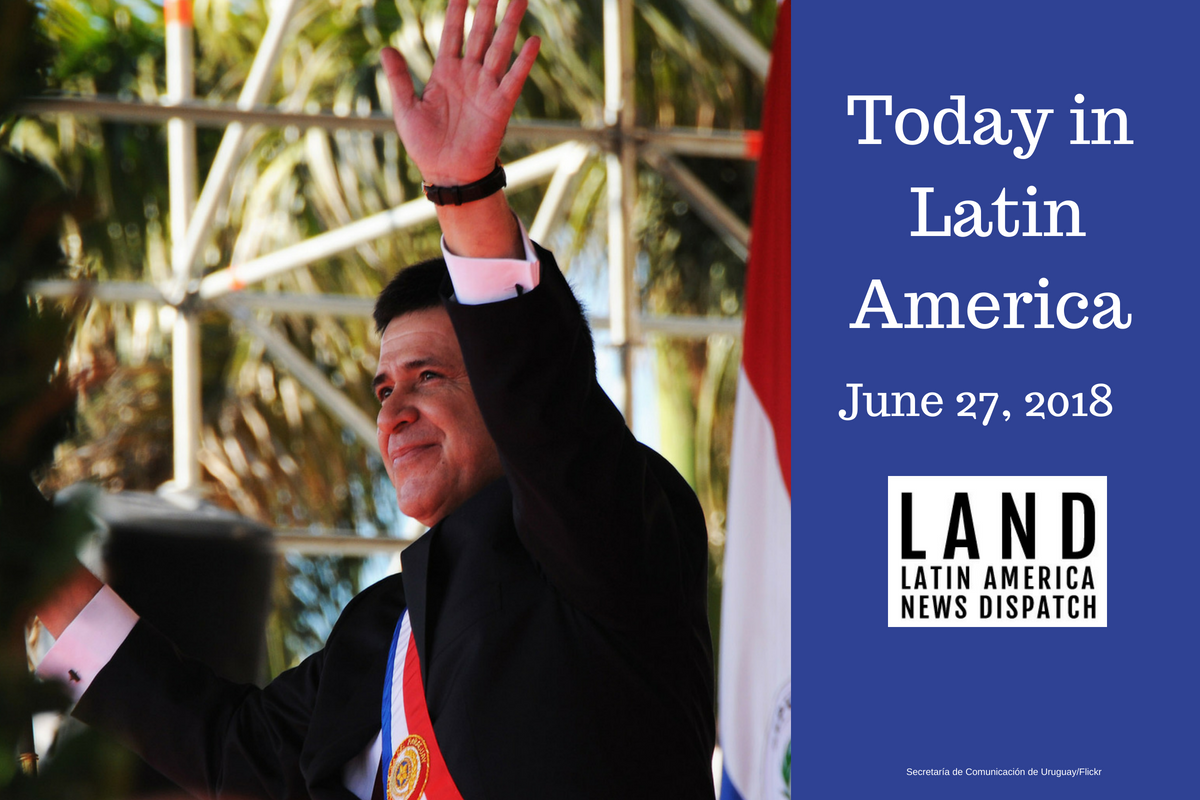 PARAGUAY: President Horacio Cartes announced on Tuesday he would pull back on his attempt to resign six weeks before his term ends after he was unable to get the required number of votes for the Senate to accept his resignation. Cartes wanted to resign to be able to take an active seat in the Senate he won in the April 22 elections; although Paraguay’s Constitution gives former presidents an honorary seat in the Senate, Cartes ran for a seat with full rights.

Critics say he may be seeking the immunity from prosecution that a full seat in the Senate grants but an honorary seat doesn’t. Before Cartes became president, WikiLeaks published a 2010 U.S. State Department cable according to which he was the head of a drug trafficking and money laundering operation, but he has always denied this is true.

UNITED STATES-MEXICO: At a court hearing yesterday, the lawyers of Joaquín Guzmán Loera, widely known as “El Chapo” the leader of Mexico’s powerful Sinaloa drug cartel, suggested that he may not be the head of the organization but only a lieutenant. The prosecution had to recognize that over the years several confidential informants of the U.S. government have said that, despite his reputation, Guzmán isn’t the head of the cartel.

MEXICO: A coalition of non-governmental groups sponsored by the United Nations to monitor Mexico’s election campaigns said yesterday it had identified widespread schemes to garner votes through payments and threats to end of social programs. Although the Citizen Electoral Observation Network, as the coalition is called, has received complaints against all the parties, most have been directed towards the current ruling party, President Enrique Peña Nieto’s PRI.

MEXICO: A candidate to the state assembly of Oaxaca and four members of his campaign team were killed on Monday night while traveling through the town of San Vicente Coatlán. Candidate Emigdio López Avendaño belonged to the leftist party Morena of presidential candidate Andrés Manuel López Obrador. And yesterday, mayoral candidate Raymundo Carmona was attacked and is gravely injured. Carmona belongs to the PRD party and is running for the mayorship of the town of Pochutla, also in the southern state of Oaxaca, as part of the México al Frente coalition of presidential candidate Ricardo Anaya.

CUBA-UNITED STATES: The U.S. State Department urged Cuba yesterday to “release all political prisoners immediately,” specifically referring to human rights activist Eduardo Cardet and environmental activist Ariel Ruiz Urquiola. The second of the two was taken to a hospital last Friday after embarking on a hunger and thirst strike against his detention, said his sister Omara Ruiz Urquiola.

PANAMA: The Supreme Court of Justice ruled yesterday that it retains competence to judge former President Ricardo Martinelli, despite his resignation as a deputy to the Central American Parliament. Martinelli’s defense had hoped that his resignation to the post that is traditionally awarded to the region’s former presidents, would allow him to move the trial for illegally spying on the opposition to the ordinary system, but Judge Jerónimo Mejía ruled that once the procedures have started any change in position does not exempt the court from jurisdiction.

NICARAGUA: The Nicaraguan Pro-Human Rights Association published a report yesterday that raises the death toll of the anti-government protests that began on April 18th to 285, out of which the organization has registered the identities and specific circumstances of 262 of the deaths while the rest are unidentified. In addition to this, 2,500 have been injured, of which 46 will be permanently disabled, and 156 persons are reported missing. Meanwhile, the Nicaraguan Human Rights Center has registered 212 mortal victims.

GUYANA: The Caribbean Court of Justice ruled yesterday that presidential term limits and requirements for candidates set by a 2001 amendment of the Guyanese Constitution are lawful. The decision by the Trinidad-based court means that former president Bharrat Jagdeo won’t be able to run for president again as he has already served two terms.

BRAZIL: A controversial bill that seeks to loosen pesticide laws passed its first test in the Brazilian Congress when a commission approved it. The bill will still need to be voted on by both houses of Congress and sanctioned by the president before becoming law. The bill overhauls existing legislation that its proponents deem dated, and puts the sole responsibility of approving new products on the Ministry of Agriculture, removing the Health and Environment Ministries from decision-making roles. An on-line petition against the bill has garnered 250,000 signatures and environmentalists, health and environment ministry bodies and United Nations special rapporteurs have also protested against it.