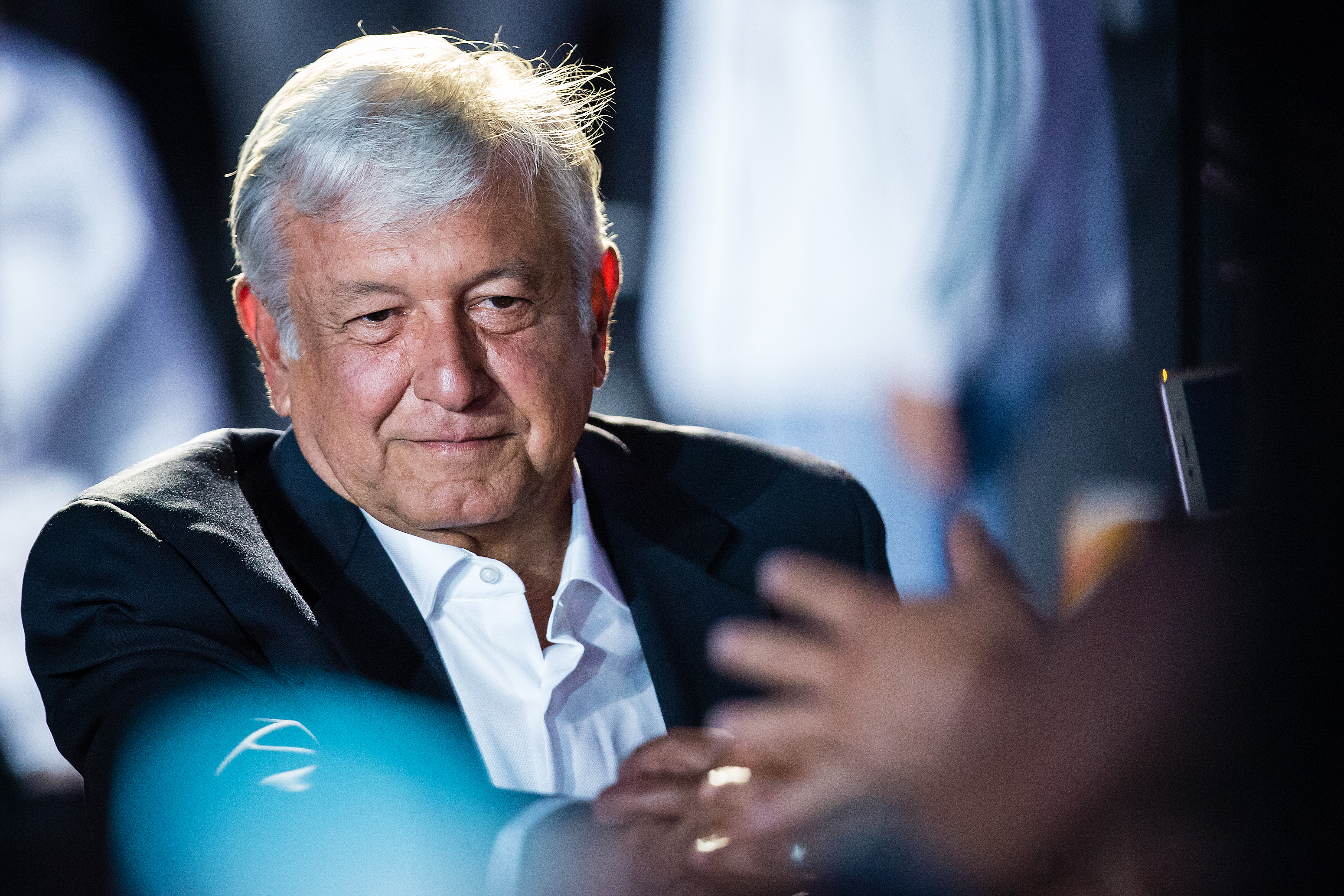 MEXICO CITY — Mexico’s 2018 elections will take place this Sunday, July 1. The positions for which votes will be cast are the Presidency, the 128 seats in the Senate, the 500 seats in the Chamber of Deputies, nine governorships, and thousands of local positions. Close to 90 million people are able to vote, making the election the largest in the country’s history. The issues that have been talked about on the campaign trail are those that are seen as failures by the current administration, such as corruption, the country’s ongoing violence, and the economy.

The candidates who have vowed to tackle these issues and others are Andrés Manuel López Obrador (often referred to as AMLO), the candidate running for the “Together we will make History” coalition; Ricardo Anaya, for the “For Mexico to the Front” coalition; José Antonio Meade, running for the “Mexico Together” coalition; and Jaime “El Bronco” Rodríguez Calderón running as an independent.

The front-runner in the presidential elections is López Obrador, who, according to four separate polls in recent weeks, has a lead of 20 points or more over his opponents.

Current president Enrique Peña Nieto of the centrist Institutional Revolutionary Party, who served a six-year term and cannot be re-elected due to the country’s law, is highly unpopular.

With 2017 being the deadliest year on record, and the month of May the deadliest month on record, his administration is considered one that has failed at tackling the issues of security and violence—which has been seeping into the election. According to the consulting firm Etellekt, 122 politically active individuals being assassinated, with 46 of those being candidates.

Poverty is also pervasive and many see the economy growing insufficiently, with an unbalanced distribution of wealth.

López Obrador is the former mayor of Mexico City, serving from 2000 to 2005, and is known throughout the country for his two failed presidential campaigns in 2006 and 2012. After the 2006 election, he created controversy when he did not accept the results of the election and declared fraud after he lost by less than a percentage point. His supporters staged protests and López Obrador had a mock swearing-in ceremony.

During that time, López Obrador was a member of the left-wing Party of the Democratic Revolution (PRD) but broke with the party after the losing the 2012 elections and shortly after created his own party, the National Regeneration Movement (referred as Morena). Supporters include a base of people from across the political spectrum and not just the traditional left. It includes a number of former members of the center-right, National Action Party (PAN), who are closely involved with the campaign.

“Morena is not a party with a cohesive ideological platform. Morena is a party of people and of individuals that didn’t get access to power, to economic change, or to any meaningful or better economic or social positions with today’s regime,” says Viridiana Rios, a fellow at the Wilson Center.

Morena is on track to win the most seats in the chamber of deputies, but not quite a majority, according to polls by El Financiero.

Additionally, the electoral coalition that López Obrador is running for includes a small center-right, Christian political party—the Social Encounter Party (PES). The inclusion of the PES into López Obrador’s coalition, “led many of his traditional followers to question his alliances because, in essence, what do they bring to the table?” said Miguel Tinker Salas, a professor of Latin American Studies at Pomona College.

In an interview with La Jornada, López Obrador called his movement “broad, plural, inclusive” saying that it fights for “equality and honesty.”

Rios of the Wilson Center said that there are economic reasons that explain why so many are voting for López Obrador. His voters are often portrayed as angry voters, but Rios believes they are the typical rational voters who vote with their pockets. Rios added that some of the voters of López Obrador come from a layer of the Mexican economy that did not receive the benefits of economic growth that the country had experienced in the last 20 years, and in essence are worse than they were 20 years ago.

Despite his massive lead, however, there are many criticisms of López Obrador. Many have noted his refusal to accept the results of the 2006 elections and some say he has authoritarian instincts. He has also been criticized for the lack of internal dissent and democracy within Morena itself and the way the candidates were selected. Rios is critical of his approach to corruption, one of his major campaign issues.

“He is ignoring all of the proposals of civil society,” Rios said.

When it come to picking an anti-corruption prosecutor, López Obrador says he will choose three options and will let the senate pick from those candidates. This could be dangerous, Rios noted, because he talks about getting rid of corruption yet not quite within the party itself. “The institutional design that he is proposing seems to be not the most effective towards fighting corruption, or at least towards fighting the corruption of the incumbent party.”

The strategy of Ricardo Anaya is very different. Rios says Anaya is advocating for an independent prosecutor that cannot be picked by the president in order to prevent the prosecutor from having a bias.

Anaya is the candidate who appears to be winning the race for second place. He is a former legislator from the state of Querétaro and former president of the PAN, who, according to Tinker Salas, “staged a coup in his own party,” to become the party’s presidential candidate, alienating people in his party along the way.

While Anaya was president of the PAN, he was fundamental in the creation in the coalition he is running for, which is made up of his party, the conservative PAN, and two traditionally center-left parties, the PRD and Citizens Movement (MC). The coalition is not only unusual for the national level because it unites parties from different sides of the political spectrum, but also because it unites the second and third largest parties in the chamber of deputies.

In both the PAN and the PRD parties, there have been politicians who have been critical of the coalition and Anaya, with some members leaving the parties.

As a result of this left-right coalition, the policy platform put forward by Anaya is incoherent, says Rios.

“In the same platform they are claiming very conservative measures, they are also claiming to implement UBI [Universal Basic Income],” she says “[Anaya] was not capable of creating a platform that was meaningful for people.”

Anaya who has run as a technocrat and who kicked off his campaign with a “hackathon,” has in recent weeks, according to Tinker Salas, been mimicking the style of López Obrador because it has appeared to be working.

“He has adopted a neo-populist perspective, promising to go after corruption, in essence echoing [López] Obrador’s positions on the question of corruption as the most nefarious problem that Mexico faces,” states Tinker Salas.

Earlier this year Anaya was implicated by the Attorney General’s office in a money laundering scheme. He and many others say it is an attempt by the current administration to go after him by using government institutions against him for political reasons.

The candidate for the ruling centrist PRI, José Antonio Meade, is also technocrat who has served in many positions for the current administration and had also held a cabinet position in the previous administration of PAN led by Felipe Calderón. Despite running for the PRI, he is not a formal member of the PRI.

Throughout his time on the campaign trail, Meade has not been able to pick up steam.

Also running is the independent candidate Jaime “El Bronco” Rodríguez Calderón, who made headlines in 2015 for winning the governorship of Nuevo León. He has also made headlines for saying outrageous things in debates and on the campaign trail. The candidate has been polling around 3%, and it does not seem like he will catch up with the other candidates by Sunday.

Ahead of Sunday’s election, if the polls are to be trusted, the candidate that matters most is López Obrador.

There are currently 14 current and former governors who are being investigated for corruption, while Peña Nieto’s administration has been mired in a number of corruption scandals that many believe have not been dealt with properly. If the polls prove right, López Obrador and his administration will be given the enormous task of attempting to deal with the main issues that the Peña Nieto administration has failed to take care of, and large portions of the population seem to believe that he has the answer.

“There is a greater sense of disillusionment with the established political Mexican system”, Tinker Salas said, adding that to many,”[López Obrador] has proven that he is the alternative.”