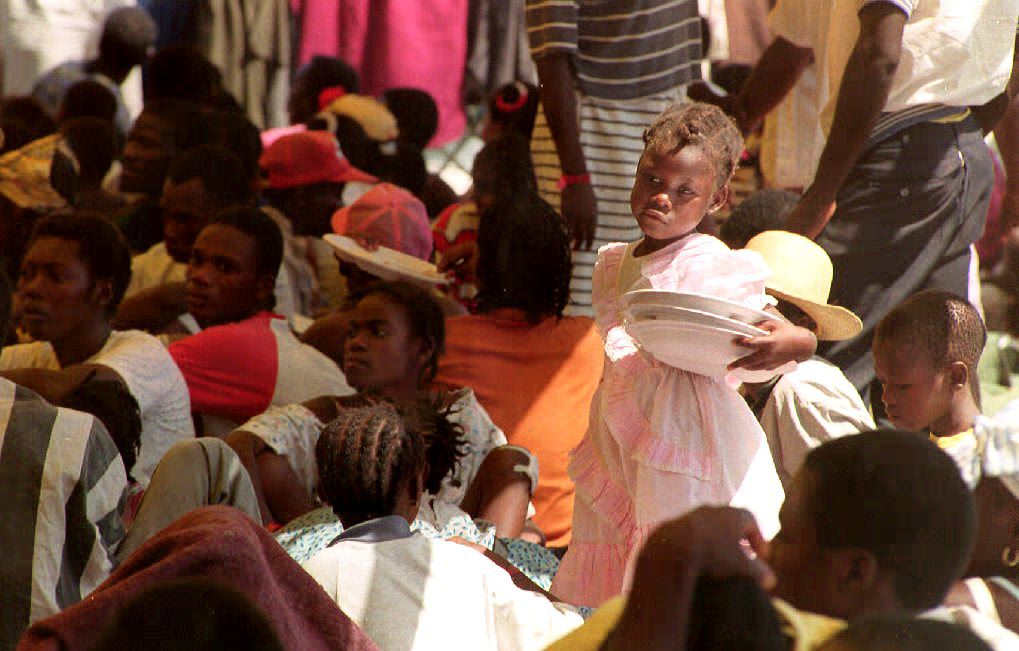 A Haitian refugee holds on to some plates 23 May, 1992 after she and over 350 Haitians were served lunch onboard the U.S. Coast Guard Cutter Thetis. The Thetis harboured refugees at Guantanamo Bay Naval Base until space could be found at the base refugee camp which housed more than 12,500 refugees. (Photo by Bob Pearson/AFP/Getty Images)

By A. Naomi Paik, University of Illinois at Urbana-Champaign

President Donald Trump’s “zero tolerance” immigration policies, where people crossing the border without documents are criminally prosecuted, do not represent the first time the U.S. has indefinitely detained immigrant children and families.

In the early 1990s, Presidents George H.W. Bush and Bill Clinton authorized the indefinite detention of Haitian refugees at the Guantanamo Bay naval base, which the U.S. maintains in southeastern Cuba. As I detail in my book “Rightlessness,” Haitians were fleeing widespread violence resulting from the 1991 coup d’etat against President Jean Bertrand Aristide. Coup leader Raoul Cedras and military and paramilitary forces carried out a reign of terror against civilians, using tactics like disappearances, torture, rape, and massacres.

When the U.S. detained Haitian refugees indefinitely, it set a precedent.

During Cedras’ reign of terror, tens of thousands of refugees departed Haiti’s shores on boats headed anywhere, seeking safety. Rather than allow them to reach U.S. shores, President Bush sent Coast Guard vessels into international waters to interdict and transport them to a makeshift camp at Guantanamo. In the coup’s first year, the U.S. intercepted 37,000 Haitians fleeing their home.

While at the base, the U.S. allowed the Haitians to apply for political asylum.

Though the base had served as a launching pad for military interventions in the early 20th century and a symbol of U.S. dominance in the Caribbean, by the 1960s, the base had become “an anachronism, with minimal strategic use,” notes historian Jana Lipman. The base was geographically isolated from the U.S. and legally out of Cuba’s jurisdiction – enabling its new use for indefinite detention.

At its peak, the camp held more than 12,000 Haitians, cycling them as quickly as possible through the asylum review process. There, Immigration and Naturalization Services conducted asylum interviews to assess whether they were “bona fide” refugees who legitimately feared returning to Haiti. INS denied the vast majority asylum, deeming them “economic migrants” who left home solely seeking economic opportunities. The U.S. returned them to Haiti, using force to remove anyone who resisted.

INS had determined that these 300 were “bona fide” refugees who must be granted asylum. The asylum process included health screenings. The exams revealed that most, but not all, of the 300 of the Haitians were HIV positive. A dilemma emerged for the U.S. government.

Forcing them to return to Haiti would have violated both the 1980 Refugee Act and the 1951 Refugee Convention, whose core principle is that refugees should not be returned to dangerous conditions.

At the same time, an HIV ban, overwhelmingly passed by Congress in 1987, barred the entry of any HIV-positive foreign person into U.S. territory. This travel ban reflected the widespread ignorance and fears of HIV during the 1980s and 1990s. A 1985 poll showed 50 percent of Americans supported quarantining anyone infected with the virus.

Caught between refugee laws and the HIV ban, the Haitian refugees were trapped in the quarantine camp at Guantanamo alongside their family members, including children.

Some refugees were told by various INS and military personnel that “they could be at Guantanamo for 10 to 20 years or until a cure for AIDS is found.”

Even the sickest refugees could not enter the U.S. for treatment. Staffed with two doctors and five nurses, the camp clinic could only administer basic health care. Nevertheless, INS spokesperson Duane Austin noted on Dec. 12, 1992: “We have no policy allowing people with AIDS to come enter the United States for treatment…They’re just going to die anyway, aren’t they?”

The Defense Department claimed it ran Guantanamo as a “humanitarian mission,” but the refugees were subjected to deplorable conditions. They slept in rudimentary barracks with garbage bags taped over the windows. They ate inedible food, at times spoiled, even infested with maggots. The medical care was, at best, ineffective and, at worst, abusive, with medical treatment performed without informed consent.

Dr. Douglas Shenson, a representative of the humanitarian organization Doctors of the World, was granted access to the camp in February 1993. Following his visit, he wrote, “Quite frankly, I consider the conditions there a disgrace.”

At the time, many refugees had hoped presidential candidate Bill Clinton, if elected, would order their release. Though he condemned the camp during the campaign, he maintained it once elected.

The refugees publicly contested their confinement, demanding release from Guantanamo. They organized peaceful protests, where they marched the campgrounds, but were met with military police armed with tanks and guns. Eventually, they coordinated a hunger strike for their freedom that lasted weeks.

Under the stress of imprisonment with no end in sight, some refugees fell into despair. The most dire cases where those of purposely hurt themselves or attempted suicide.

Children also endured the camp conditions that nearly broke grown adults. More than 25 children survived the HIV prison camp. Hundreds more passed through Guantanamo, only to be repatriated to Haiti.

A letter written by one of the leaders among the refugees sheds light on what happens under indefinite detention. She bid farewell to the two sons she had left in Haiti, telling them: “There is nothing left of me… You don’t have a mother anymore. Realize that you do not have a bad mother, only that life took me away.”

Her letter found an audience with a judge presiding over a case brought by human rights organizations demanding the refugees’ release. In June 1993, Judge Sterling Johnson sided with the refugees, saying Guantanamo’s so-called “humanitarian mission” was “nothing more than an HIV prison camp.”

Johnson ordered the government to release the refugees to anywhere but Haiti, at last giving the refugees a reason to suspend their hunger strike. Following his decision, however, the Justice Department brokered a deal with the refugees’ lawyers.

The government would not file an appeal, thereby allowing the refugees to be transferred from Guantanamo to the U.S. However, it would strip Johnson’s decision of all legal precedent – giving legal leeway to, in the future, imprison “enemy combatants” in indefinite detention once again at Guantanamo. In 2001, Deputy Assistant Attorney General John Yoo cited this vacated precedent in a “torture memo” to justify Guantanamo as a site for indefinite detention.

Even as the HIV prison camp closed, thousands continued fleeing Haiti. The U.S. military re-opened a Haitian refugee camp under the name Operation Sea Signal in 1994 that would eventually also hold Cuban migrants.

The story of Guantanamo shows that, once the U.S. establishes the infrastructure of prison camps for families, it can persist as prison camps for anyone. People who endured indefinite detention have described it as a form of torture – one that the U.S. now proposes to inflict on thousands of migrant families.