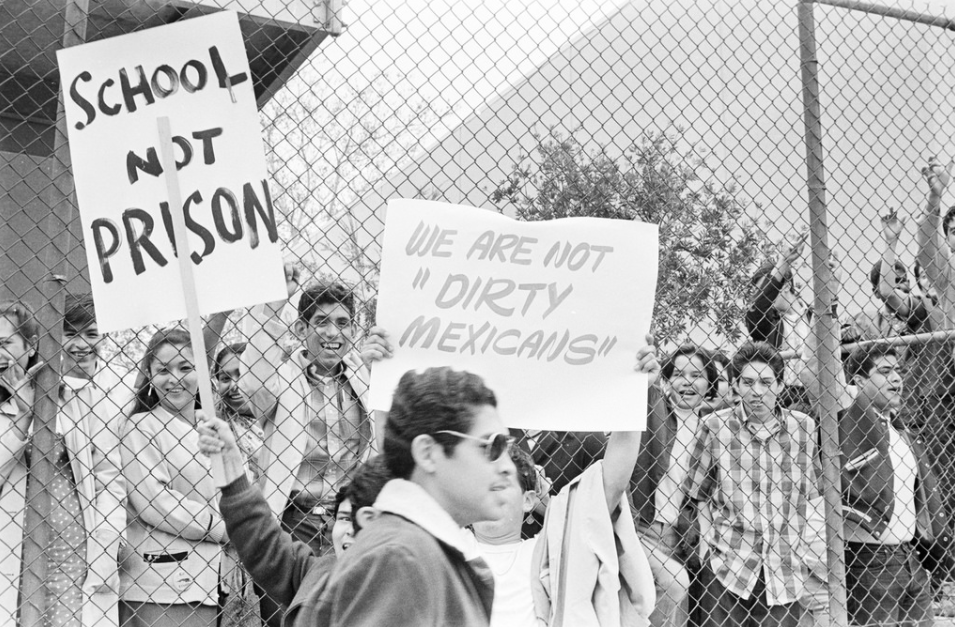 On June 15, LA Plaza de Cultura y Artes opened ¡Ya Basta! The East L.A. Walkouts and the Power of Protest. Through posters, documents, photography, music, film footage and art, the exhibit explores issues of education inequality in California both past and present, and the actions taken by Mexican and Mexican American students of East Los Angeles to advocate for their rights. With over 200 attendees on opening night, including some of the students who walked out, the exhibit is commemorating the 50th anniversary of the historic era, which kicked off on March 1, 1968.

“We really want to call attention to what the walkouts accomplished and want people to walk away from this being able to draw parallels between what students in that time [faced] and the problems that are still with us today, but also to be inspired,” senior curator, Erin M. Curtis, told Latino USA.

The exhibit draws connections between movements happening then and today. ¡Ya Basta! was erected with student activists in mind and a hope to inspire them to rise to the occasion.

When designing the exhibit, interactive installations were included with the intention to open dialogue. These interactive portions ask visitors to write down an action he or she plans to take towards tackling injustice. Pledges range anywhere from planting a garden to speaking out against injustice to making classrooms more welcoming for Latinx students.

The History of the Walkouts

During the 1960s and 70s, a widespread fight for civil rights and equality was consuming the nation one protest at a time. The movement included several East Los Angeles high schools, such as Abraham Lincoln Senior High School, James A. Garfield Senior High School, Belmont Senior High School and others. While most of the spotlight of the era has been on the national grievances of the time, like the Vietnam War and the African-American Civil Rights movement, East Los Angeles’ school district gained notoriety for local student-led protests and walkouts.

Chicano and Chicana students walked out to challenge the inequalities in the school system. The curriculum lacked in cultural diversity and, to students like Margarita Cuarón, it seemed to be set up to limit students to a vocational career while guiding them away from a collegiate track.

Cuarón, one of the brave students who walked out, has a piece on display. In the 1960s, Cuarón thought of herself as a regular high school student at Garfield High School in East Los Angeles. That quickly changed when she noticed that her school was different than others because it had “no expectations.”

Walking out was a decision that Cuarón says she never had second thoughts or doubts about. Reflecting on this time in her life, Cuarón believes it has been, “the most important thing outside of giving childbirth.”

Educator Sal Castro was one of the trailblazers who ignited the movement in 1963 when he held the first Chicano Youth Leadership Conference in celebration of Chicano heritage and pride. This conference laid down the foundation for the 1968 walkouts.

After several demonstrations, the movement achieved its first success on March 28, 1968 when community members were able to vocalize their demands to the school board.

However, these demands were not immediately accepted and answered with backlash. Thirteen of the walkout organizers were arrested, including Castro. The protest found its way to the Hall of Justice in downtown L.A., until protesters were released.

To Cuarón, who was also arrested, the East L.A. Walkouts are tied to what is happening today.

“The turn of events and issues that kids are having to deal with in their very lives is something unimaginable,” Cuarón told Latino USA about the struggles youth face now. “These kids today, I bow down and honor them. I give them so much encouragement and validate what they are doing. America is a microcosm of different cultures, people, and languages. Unfortunately, right now, the Statue of Liberty is being desecrated by the Trump administration.”

At the heart of ¡Ya Basta! is a hope to inspire youth today.

“The goal of the exhibit is to demonstrate that change begins by ordinary people deciding that they are not going to put up with injustice any longer and choosing to take action. Everything about the show is really designed to inspire you to take action in the spirit of the walkouts in your own community and to make positive change,” Curtis said.

The exhibit has also allowed artists to draw parallels between the issues of then and now. One of the artists, Nery Gabriel Lemus, dedicated a piece to the ongoing case for DACA in correlation to the Parkland school shooting this year.

For Lemus, the issue of immigration hits home. Having immigrant parents from Guatemala and a family of his own, seeing families being torn apart is unimaginable to him.

Lemus’ thought that no human being should be looked at as “other” motivated him to create his piece. In trying to further the conversation and inspire others, Lemus’ artwork promotes the equality many in this country are currently fighting for.

“I grew up in a low-income, predominantly immigrant community and have my master’s, my bachelor’s,” Lemus told Latino USA. “A lot of times you don’t have those resources, a lot of people don’t have those opportunities, so I think it’s important for us to empower them and say you can do it. It is possible to be successful.”