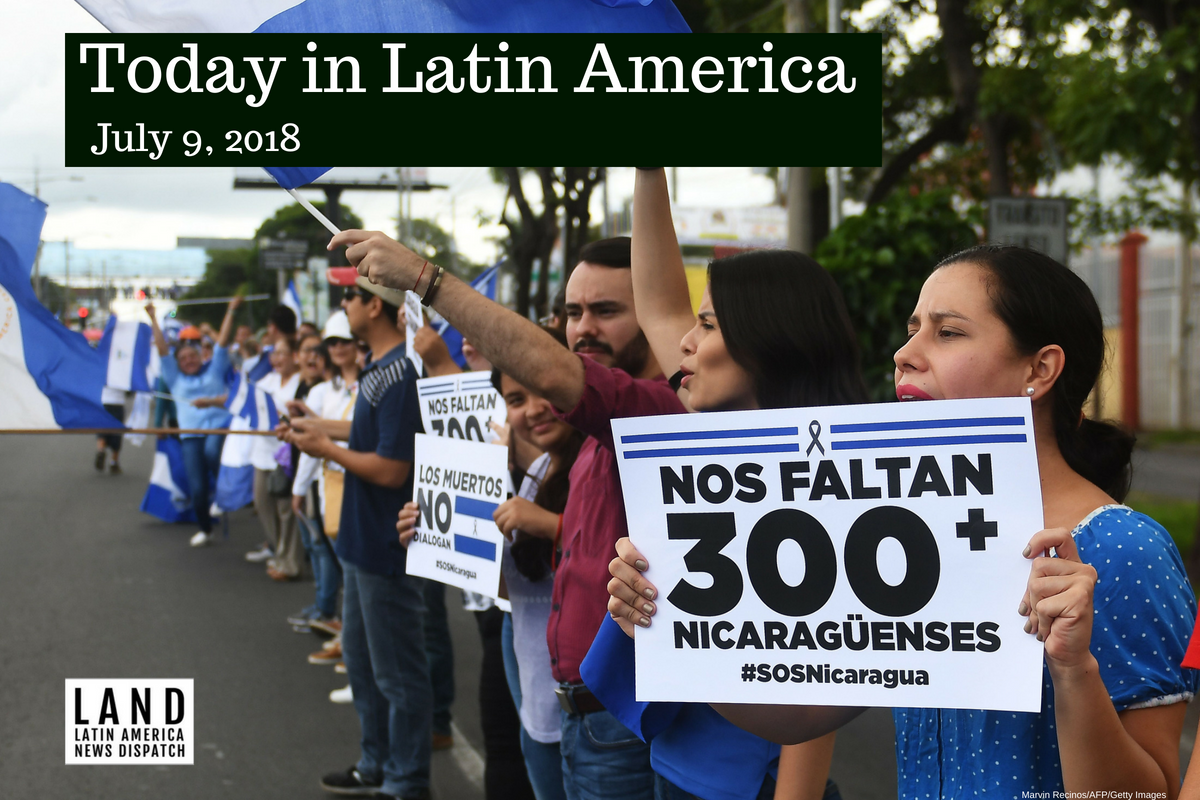 Anti-government protesters hold signs reading 'We are missing 300 Nicaraguans' as they stand forming a 'Human Chain' in Managua, on July 4, 2018. (Photo by Marvin Recinos/AFP/Getty Images)

NICARAGUA: Pro-government forces made up of police and paramilitary militias raided the areas of Diriamba and Jinotepe, 13 miles from the opposition bastion of Masaya, as a part of what the government has called the “caravan of peace,” which aims to dismantle barricades. About 350 to 400 cargo trucks that had been stranded for over a month were able to pass through. The Nicaraguan Center for Human Rights said at least 14 people were dead as a result, including at least two police officers, one anti-riot officer and one paramilitary member. The Nicaraguan Pro-Human Rights Association recorded at least 11 dead, 30 injured and dozens of detainees. The truck drivers, many of which were Panamanian, thanked both governments for their liberation.

On Saturday, President Daniel Ortega made his first public appearance in over a month at a “march for peace” in Managua that replaced a traditional event in the city of Masaya to commemorate the Sandinista revolution. At the rally, attended by thousands of supporters, Ortega ruled out calling for the early elections which protesters demand. The State department of the United States ordered on Friday the evacuation of all non-essential staff from its embassy.

MEXICO: The electoral authorities of the central state of Puebla announced the winner of last Sunday’s election for the governorship is Martha Erika Alonso, the candidate for the right wing party PAN in coalition with other groups and wife of former governor Rafael Moreno Valle. Miguel Barbosa, the candidate for Morena, announced he will challenge the decision in court. Election exit polls by private firms had predicted Barbosa’s triumph, but after a violent election day with shootings inside polling stations, bloody confrontations between supporters of the candidates and the lynching of two men who had apparently stolen ballot boxes, preliminary results favored Alonso.

MEXICO-UNITED STATES: Drug lord Dámaso López of the Sinaloa Cartel was extradited Friday from Ciudad Juárez to the United States. Known under the alias El Licenciado, López is accused of being Joaquín “El Chapo” Guzmán’s right-hand man and is expected to be a key witness in the ongoing trial against him in New York.

HAITI: Major protests rocked Haiti through the weekend after the government announced on Friday it would lower fuel subsidies resulting in a 38 percent price jump for gasoline and 47 percent for diesel. This is part of an agreement with the International Monetary Fund to boost government revenue to better fund government services and to strengthen the country’s economy. The government backtracked on Saturday but in the capital and the northern city of Cap-Haïtien protests, barricades on the streets and looting continued into Sunday. At least three people were killed on Friday and possibly four on Sunday.

DOMINICA-PUERTO RICO: The government of Dominica declared a state of emergency and curfew on Sunday as Hurricane Beryl, weakened to a tropical storm, approached the island with the purpose of preventing the looting and lawlessness that occurred after Hurricane Maria last year. Prime Minister Roosevelt Skerrit also said the water system would be shut down as a precaution. Puerto Rico’s governor warned there would probably be new power outages in the archipelago.

GUATEMALA: Authorities reduced the number of people on the official list of missing persons from last month’s eruption of the Volcán de Fuego to 329 after two men who were on the list were found to be alive.

COLOMBIA: On Friday, thousands gathered in Bogotá to protest after an especially bloody week of killings of human rights defenders that threatens to undermine the fragile peace process. Similar though smaller rallies were held in almost 50 other cities around Colombia and the world including Paris and New York. While the police unit responsible for the protection of social leaders says that at least 178 activists have been murdered since Nov. 2016 when the peace agreement with the FARC was signed, the Ombudsman’s Office has counted 311 murdered social leaders between Jan. 1, 2016 and Jun. 30, 2018 and has calculated an average one every three days. But since the beginning of July at least seven leaders have been killed, including three on Friday, the day of the protests.

BRAZIL: After a string of contradictory rulings yesterday on whether former president Luiz Inácio Lula da Silva should be released from prison while he appeals a corruption conviction the president of Brazil’s fourth regional federal court, Judge Thompson Flores, resolved to maintain Lula in prison. The weekend duty judge, Judge Rogerio Faverto, who was a member of Lula’s Workers’ Party for nearly 20 years and served in his administration from 2005 to 2010, ruled for his release in early in the morning to protect his right to an “effective participation in the democratic process,” as Lula insists on running for reelection despite his conviction and is the undisputed leader of the polls. But Judge Sergio Moro, who convicted Lula in April, ordered police to hold off on the release order. Favreto then responded by ordering police to act immediately on his order. And then Judge Joao Pedro Gebran Neto, who is handling Lula’s case at the regional federal court, ordered Lula be kept in jail. Prompting Favreto to respond with another release order. Judge Flores’ order to maintain Lula in prison is final, although Lula’s defense can continue to appeal through other means.

ARGENTINA: Thousands marched through the streets of Buenos Aires last Thursday after the administration of President Mauricio Macri fired 40 percent of employees of the Argentine state news agency Télam as part of the austerity measures promised to the International Monetary Fund. Protesters accused the government of conducting an “ideological cleanse” of the agency, which grew almost twofold during the left-wing governments of Néstor Kirchner and Cristina Fernández de Kirchner. The Secretary of Media and Public Content, Hernán Lombardi, gave support to this claim when he published on his personal Facebook account that during those administrations “Wolves disguised as sheep, propaganda disguised as journalism. Today journalism won, citizens won.”