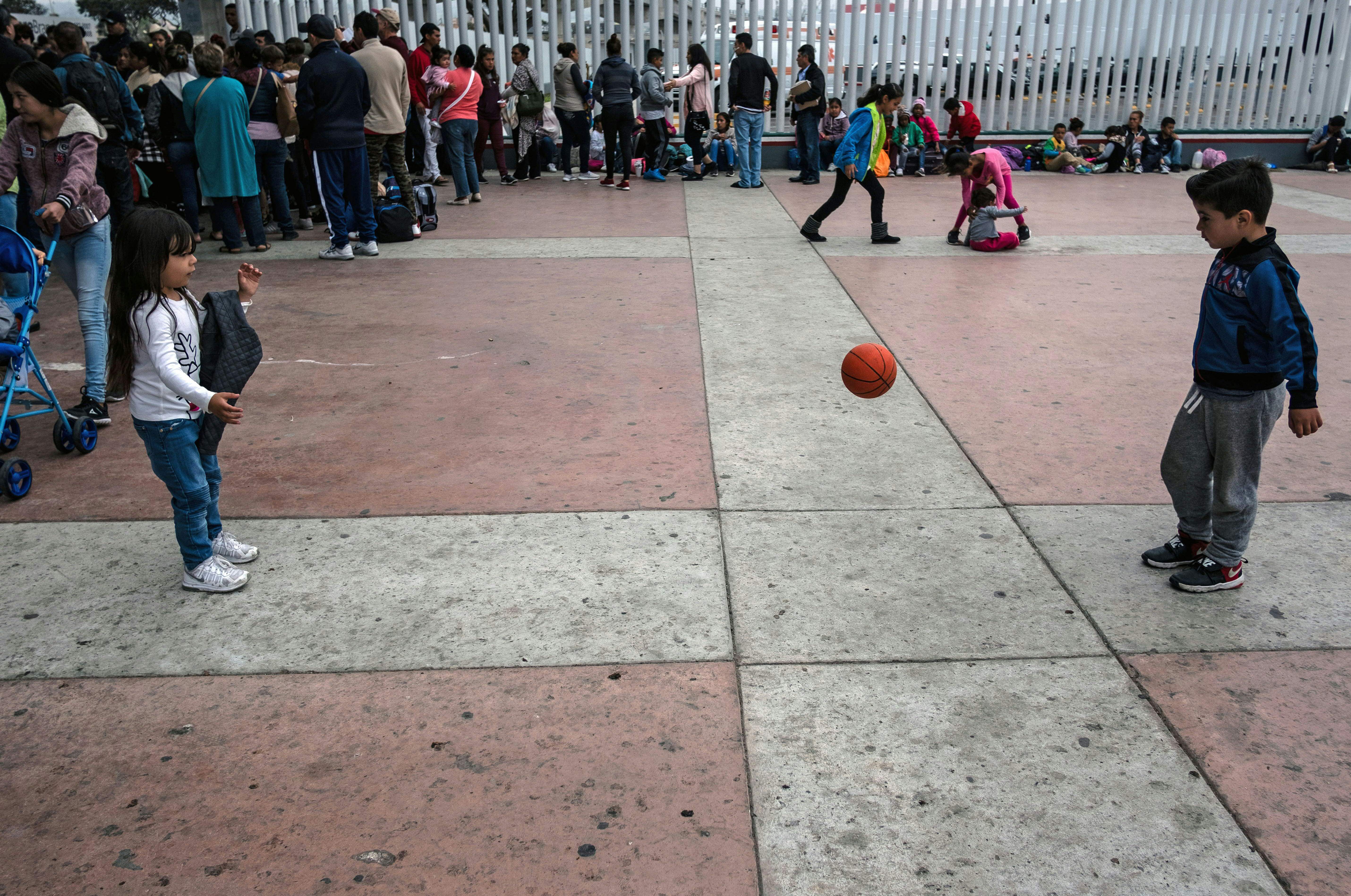 Children play near El Chaparral port of entry in Tijuana, Mexico, in the border with the United States on June 21, 2018. (Photo by Guillermo Arias/AFP/Getty Images)

I’m concerned for Trump supporters. Some of them don’t realize they are at the centre of harms that have yet to unfold.

One of my closest family members, a United States citizen, firmly believes in the policies of U.S. President Donald Trump. She is generally caring and loving, especially towards children. But I’m fairly certain she does not oppose separating migrant children from their families. She likely blames their parents and sees “those kids” as different from her own.

I don’t know when she’ll realize there is, in truth, no “us” and no “them.” I don’t know if she understands that the detention and separation of migrant children harms her fellow Americans too.

The president recently signed an executive order to stop the separation of migrant children from their families. Some have been reunited with their parents. Perhaps the assault has ended, but as thousands were forcibly separated and still remain in custody or care, the crisis is far from over.

Grief, pain and trauma come in waves. It’s only in the days and weeks after the initial injury that the injured and their loved ones start to reflect on the horror of their experience.

As a child psychiatrist, working with children who have been exposed to traumatic events and loss, I can tell you that the treatment of migrant children along the U.S. borders may impact their biological and psychological development in profound and lasting ways.

Much has already been shared by my colleagues on the potential lifelong impact on children of traumatic separation from caregivers. What we haven’t yet discussed widely is the impact on U.S. citizens.

It can be months until trauma fully impacts those who treat the injured or help in the aftermath. This can be post-traumatic stress disorder in its own right or vicarious traumatization — the accumulated emotional response to the pain of others.

Think of the impact of the Sept. 11 terrorist attacks on first responders and others exposed directly to the events. Research shows that repeatedly hearing the stories of trauma victims doubles the risk of social workers themselves experiencing post-traumatic stress disorder. Dealing with severe emotional injury, especially to children, can cause trauma in the same way as exposure to violence or death. For young children, separation from their caregiver is a life-threatening injury.

I think about the border guards and other federal workers who have been on the front lines. Many of the people interacting directly with children and families will have been doing their job, but not serving their conscience.

I’ve worked closely with child protection social workers and mental health clinicians for more than 10 years, and even when removal of a child is necessary or just, the involved professionals can experience tremendous pain.

An Australian study of psychiatric assessment of children and families in immigration and detention reported that clinicians experienced feelings of “impotence, anger, hopelessness, avoidance, numbing, sadness and despair, feelings resonating with those experienced by detainees.”

Front-line workers may be haunted by visions of terrified and screaming children, of desperate mothers and fathers. Some may develop PTSD, depression and compassion fatigue. Some may try to hide their pain in addictions or grow distant from their partners and their own children.

This is a possible outcome not only for those caring now for scared and heartbroken children, but also those who have forcibly separated families. A country focused on personal safety has inadvertently admitted a very different but substantial threat.

Nothing Erases the Past

There is the burden of responsibility for those who may have idly witnessed, and those who have perpetrated, harms. With atrocities on any scale, the pain is beyond any one individual.

I’m always struck by how apologetic Germans continue to be about their role in the two world wars and the Holocaust. They are, for the most part, the children and grandchildren of those who perpetrated the crimes. The sense of collective responsibility of German society is deeply moving, as is their leadership and commitment to a better way.

In Canada, we continue to grapple with how to ever truly reconcile or make amends for our colonial acts. Our own history of forced separation of Indigenous youth from their families weighs heavily. Apologies and meaningful action are helpful, but nothing truly erases the past.

I think of tomorrow’s children and grandchildren living in the U.S., and I feel for them too. It will be so difficult for them to accept what happened back then, in 2018.

Injury to the Heart

None of us are made of steel. We are made for love. The treatment of children at the U.S. borders is a moral crisis. Political beliefs and rationalisations can’t shield anyone from this kind of injury to the heart.

Of course I worry most for the children and families who have been torn apart. To imagine myself in the mind of a confused child or distraught parent makes me physically ill. Having treated many grandchildren of Canadian residential school survivors, I know there could be generations of suffering to come if the U.S. fails to reunify all families quickly.

Yet, I can’t help but also consider those who have, by choice or obligation, put political arguments about law and personal safety above the deeper inclinations of their own hearts.

Whether they realize it or not, the collective suffering of the future will not distinguish between an “us” and a “them.” Treating migrant children and families with compassion is imperative not only for the health of those detained, but also for the health and well-being of the American people.