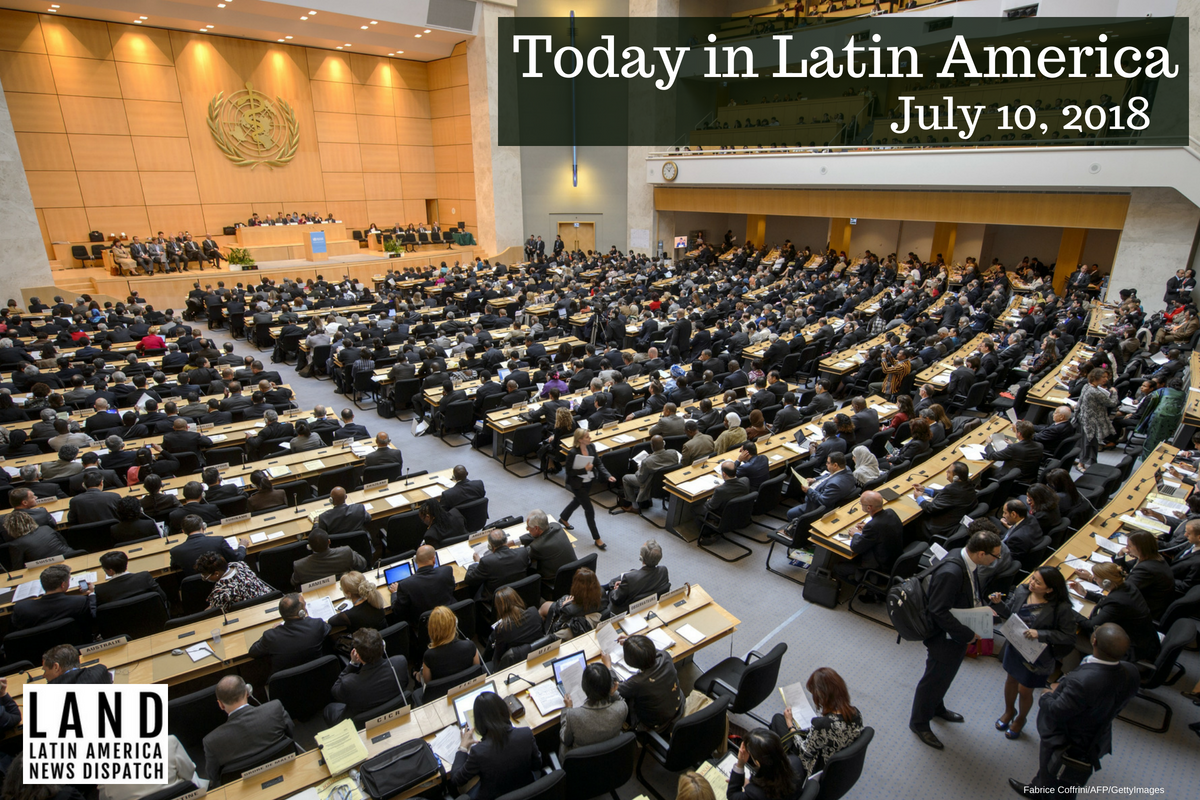 General view of the assembly hall during the opening day of the annual assembly of the World Health Organization attended by government ministers and hundred of delegates, on May 21, 2012 at the United Nations office in Geneva. (Photo by Fabrice Coffrini/AFP/GettyImages)

ECUADOR-UNITED STATES: The United States strong-armed Ecuador into backing off from proposing a resolution to promote breastfeeding during the United Nations-affiliated World Health Assembly at the end of May, the New York Times reported on Sunday. More than a dozen participants from several countries told reporters that after the U.S. representatives couldn’t water-down the resolution, which said mother’s milk is healthiest and countries should strive to limit the inaccurate or misleading marketing of breast milk substitutes, they successfully threatened Ecuador with punishing trade measures and retiring military aid. A spokesman for the Department of Health and Human Services denied the agency was involved in threatening Ecuador. After at least a dozen other countries, mostly from Latin America and Africa, backed off the resolution, the Russian delegation introduced it.

The U.S. currently gives Ecuador military assistance in the norther region along the border with Colombia where violence from drug gangs and FARC dissidences is spilling over.

MEXICO: Men in masks killed five women and two men at a house party on Sunday night in Guadalajara, the capital of the west-central state of Jalisco, home base of the violent Jalisco New Generation drug cartel. State prosecutor Raúl Sánchez Jiménez said the home was apparently used for low-level drug sales.

MEXICO: Mexico City authorities warned radioactive material was stolen from a vehicle belonging to a local radiography supplier on Friday. The radioactive isotope Iridium-192 is used in construction and manufacturing and can be dangerous if not handled properly for a prolonged period. There have been several similar thefts in Mexico in recent years.

HAITI: Protests in the capital, Port-au-Prince, continued for a fourth day. A general strike paralyzed the city and protesters clashed with the police and set a tax office on fire. Unrest began on Friday when the government announced a 50-percent hike in the price of fuel, but continued even after it rescinded the measures on Saturday.

PUERTO RICO: Beryl, the season’s first hurricane, although weakened into a tropical storm, hit the U.S. territory yesterday. At the peak of the storm more than 47,000 customers lost power, but by the end of the afternoon that number had dropped to 13,000. About 8,600 customers were left without water after the storm passed. About 60,000 people in the archipelago still only have tarps for roofs after last year’s devastating Hurricane Maria.

CUBA: The government of President Miguel Díaz-Canel will unveil a set of new regulations today unfreezing the tourism-related private business sector. New restaurants, bed-and-breakfasts and transportation businesses will be allowed to open but will be required to move all their revenue through state-run bank accounts to prevent tax evasion, which had been the main reason behind the government’s decision to freeze new licenses in August 2017.

NICARAGUA: Masked government supporters attacked a group of Roman Catholic priests while chanting “Murderers!” and “We want peace!” yesterday in the city of Diriamba, south of Managua. The priests had arrived to the San Sebastián Basilica to mediate in the release of a besieged group of protesters, paramedics and Franciscan missionaries that had taken refuge there since Sunday. Journalists who arrived with the priests to cover the mediation, which was ultimately successful, were also attacked and had their equipment stolen. The Nicaraguan Center for Human Rights raised its calculation of Sunday’s death toll in Diriamba and Jinotepe to 17, making it one of the bloodiest days since the beginning of the uprising.

GUATEMALA: A month after the eruption of the Volcán de Fuego, over 15,000 children finally restarted school yesterday in special tents provided by UNICEF for the purpose.

COLOMBIA: President Juan Manuel Santos signed into law a bill that gives “minimum guarantees” of financing, access to media and political, legal and personal safety to political parties declared in opposition to the government. These rights had been contemplated in the 1991 Constitution but it took until now for their regulation to pass through Congress. The bill also gives seats in the Senate and the House of Representatives respectively to the presidential and vice-presidential candidates who get the second highest number of votes. These seats will be filled by the left-wing candidates Gustavo Petro and Ángela María Robledo.

BRAZIL: Odebrecht, the Brazilian construction firm at the heart of a multinational corruption scandal, signed on Monday an agreement with Brazil’s solicitor general and comptroller generalto pay around $700 million over 22 years to the state oil company Petrobras and other state entities in exchange for them dropping legal proceedings. Authorities estimate the firm will pay around $1.76 billion after inflation is adjusted.

PARAGUAY: Outgoing president Horacio Cartes and former president Nicanor Duarte accused the head of the Senate Fernando Lugo of not convening them to be sworn in as senators, as is their right as former presidents according to the Paraguayan constitution. The General Attorney’s office yesterday requested reports on the matter from Congress and the electoral authorities.