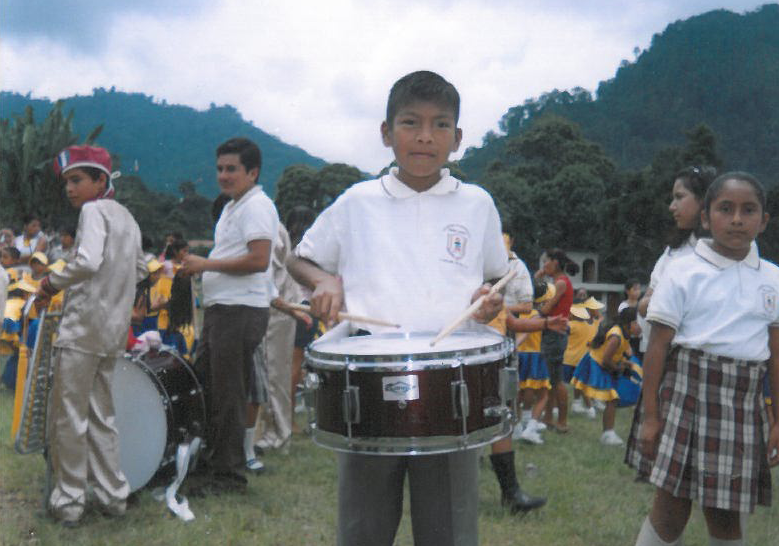 Nelson Omar Chilel Lopes is one of many who lost his life while crossing the border. (Photo courtesy of Robin C. Reineke)

Nelson, from Guatemala, was 14 years old when he arrived at the border. He was on a journey to join his mother, who had migrated to Arizona so that she could support him with a stable job. But Nelson’s situation at home in Guatemala had become unsafe, so he undertook the dangerous journey to be reunited with her. Nelson’s neighbor, a woman in her 50s, went with him to protect him. Two years after they disappeared in the desert, their bones were found together, intertwined amid the cactus and Palo Verde trees.

When Nelson disappeared, I spoke with his mother as she searched desperately for him. “I told him not to try it,” she said. She mailed me a VHS tape recording that Nelson had made for her. When the tape arrived at the medical examiner’s office, we had to pause it whenever Nelson was smiling. We were trying to get an image of his teeth so that we could identify his skull.

As Co-Founder and Executive Director of the Colibrí Center for Human Rights, I have worked with a small team of committed human rights advocates since 2006 to help reunite families like Nelson’s through forensic science. The stories that have circulated recently of families being separated at the border after fleeing violence and poverty are the stories we have heard every day for more than a decade. But by the time we are contacted, a family member is missing or dead, having attempted to find safety by crossing a desert.

Families are being separated at the border today, not only by detention practices, but also by death and disappearance. Both are the result of policies designed to inflict maximum suffering.

While trying to defend their inhumane policies of separating families and imprisoning children, several Trump administration officials have recently cited “deterrence” as their strategy. For those of us who have been working on the border for a long time, who have found dead bodies on our hikes, spoken with mothers like Nelson’s, and held dry bones in our hands, this language is painfully familiar.

Since the mid-1990s, the U.S. approach to the border has been a strategy called “prevention through deterrence.” The idea is that the more painful, risky, and violent the border becomes for immigrants, the fewer of them will try to cross. Not only has this strategy been ineffective, it is deadly.

The official cause of death listed for Nelson is “undetermined,” because there was so little of him left that an accurate determination was impossible. Like thousands of others, Nelson probably died from exposure to the extreme southern Arizona heat. Indeed, the authors of the prevention through deterrence strategy (which included the Center for Low Intensity Conflict) intended to inflict heat on those who would try to cross. The 1994 Plan describes how the “searing heat” of the desert would be used against migrants, stating that, “illegal entrants crossing through remote, uninhabited expanses of land and sea along the border can find themselves in mortal danger.”

Signed into law under President Clinton, this strategy has been in effect during each subsequent administration. Numerous studies have shown that while prevention through deterrence policies do not decrease overall migration, they do increase death at the border. The Trump cabinet is not inventing something new by abusing immigrants and refugees at the border, they are intensifying something that is old, ineffective, and violent.

And yet, some reading this will respond by saying that the only way to save lives at the border is to build a wall. When will we realize that this is the same logic that has been used over the past two decades? We have tried that experiment, and it has failed. After more than 20 years, billions of taxpayer dollars, and an uncounted, but easily 10,000 dead, it is time to try something new.

Instead, we could try making visas available to people who wish to join their families so that they don’t have to wait 20 years to see one another again. We could look at the facts, that immigrants are good for our economy, and invest in them rather than cutting one legal immigration path after another. We could save billions and stop deporting students, veterans, farmworkers, and caregivers but instead provide them with work permits and pathways to citizenship.

Nelson disappeared in 2010. Yet it could have been yesterday, as nothing significant has changed. No, yesterday, it was the man who was deported while his wife was on her deathbed. I was told he disappeared in the desert, trying to get to her bedside, just hours before she passed away.

How many more lives will be lost before we are willing to try another strategy at our southern border? In addition to abolishing ICE and decriminalizing immigration, we need to end all policies predicated on prevention through deterrence.