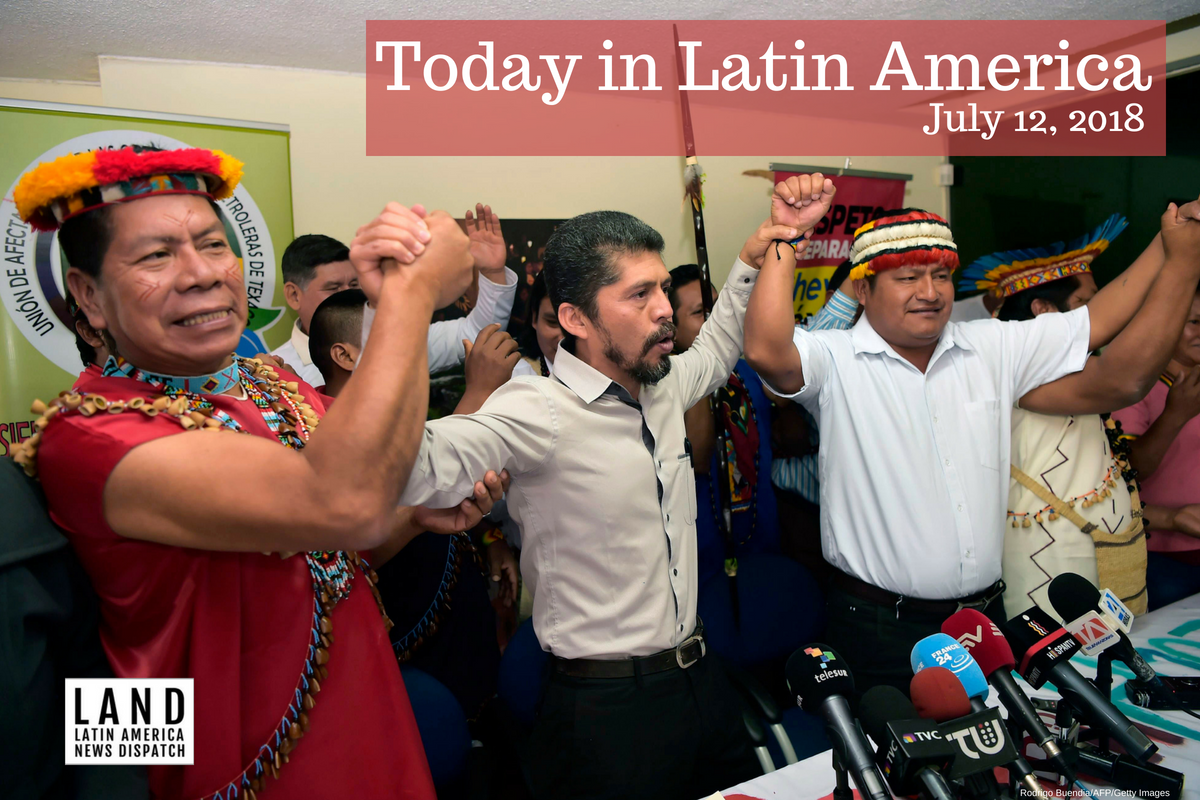 Pablo Fajardo (C), lawyer of the victims of environmental damage caused during oil operations in the Ecuadoran Amazon from 1964 to 1990 blamed on Texaco, which Chevron acquired in 2001 celebrates with his clients, during a press conference in Quito on July 11, 2018. (Photo by Rodrigo Buendia/AFP/Getty Images)

ECUADOR: Ecuador’s highest court upheld a sentence that requires U.S. oil giant Chevron to pay $9.5 billion in damages for decades of polluting the rainforest. Oil operations between 1964 and 1992 caused environmental damages which the company, then Texaco, doesn’t deny but blames on its local partner, the state-owned Petroecuador. Chevron also has refused to pay the damages arguing that a 1998 agreement after a $40 million cleanup absolves it of liability and that the original conviction was obtained through bribery, coercion, and fraud. Chevron doesn’t own any assets in Ecuador any longer, so the South American country has tried and failed to sue the company in Argentina (just last week), Gibraltar, Brazil, and Canada (where the case is still alive). In 2014 a court in New York ruled against Ecuador and on Tuesday, the same day the Ecuadorean court released a statement announcing the decision which is dated June 27, Steven Donziger, the American lawyer who represented Ecuador, was barred from practicing law in New York state because a Manhattan appeals court found him guilty of bribing the Ecuadorean court that ruled against Chevron.

MEXICO: President-elect Andrés Manuel López Obrador said yesterday he is going to cancel the purchase of eight armed helicopters from the U.S. government. “We can’t make that expense,” he said referring to the $1.2 billion deal at a news conference. During the campaign López Obrador had asked current president Enrique Peña Nieto to cancel the deal.

MEXICO: Authorities announced yesterday that they have identified five of the six bodies found murdered the day before in Nezahualcóyotl, a city in the state of Mexico that makes up the northeast section of the Mexico City Metropolitan Area and has traditionally not been affected by drug-related gang violence.

PUERTO RICO: The CEO of the U.S. territory’s bankrupt power company, Walter Higgins, resigned yesterday arguing that the compensation details promised in his contract wouldn’t be fulfilled. A month earlier Puerto Rico’s justice secretary had said it would be illegal for him to receive bonuses. Although the territory is facing the imposition of austerity measures, Higgins received an $450,000 annual salary which will be raised to $750,000 a year for the new CEO. Puerto Rico Senate President Thomas Rivera Schatz called for the destitution of board members who supported the astonishingly high salary in the middle of an 11-year recession.

U.S. VIRGIN ISLANDS: Thirteen workers who were left stranded without pay or transportation after helping with recovery efforts after Hurricane Maria were finally paid their wages—with no overtime for the extra hours worked—and transported back to Texas, said federal officials.

HAITI: The situation in the country begun to normalize yesterday after the weekend’s protests died down and the general strike that followed them ended, but tensions are still high and demands for President Jovenel Moïse to step down still resonate.

DOMINICAN REPUBLIC: Earlier this week, Tropical Storm Beryl left the capital of Santo Domingo without electricity, thousands without drinking water as 75 water systems were out of service, at least 8,000 people displaced and 19 villages without communication. Although Beryl was downgraded from category 1 hurricane as it lost heavy wind power before hitting ground, strong rains posed an equally dangerous threat.

EL SALVADOR: The government of President Salvador Sánchez Cerén issued a statement yesterday rejecting as politically motivated a Supreme Court ruling ordering him to testify about the disappearance in 1979 of the South African ambassador by the left-wing rebel group Popular Liberation Forces. The court argues Sánchez Cerén was the group’s second-in-command at the time, but the government says he didn’t belong to the FPL’s leadership that year and was a labor leader for teachers. The Supreme Court ruling follows a lawsuit brought by the ambassador’s relatives.

PERU: After a scandal began on Sunday night when audio clips were released showing illegal negotiations and influence peddling by the highest judges of the nation, President Martín Vizcarra—who was mentioned in some of the conversations—announced yesterday he plans to overhaul the judiciary. The recordings were made by the Attorney General’s office as part of a criminal investigation.

VENEZUELA: The riot by political prisoners held in the Bolivarian National Intelligence Service’s headquarters in Caracas came to an end today when two of the prisoners were removed by authorities, but NGOs have warned that their whereabouts are unknown. Reggie Andrade and Fred Mavarez are two former police officers who were accused, along with 12 others, of taking part in the murder of the former director of the Ministry’s press office Ricardo Durán. Even though the prosecutor ordered their release for lack a proof in 2016 all of them were kept in jail until earlier this year when during the releases after President Nicolás Maduro’s reelection all the others were released.

VENEZUELA: The head of the electoral authority announced yesterday that elections will be held on December 9 for 4,900 local offices for the country’s 335 municipal councils and 69 Indigenous communities representatives. These elections should have been held in December 2017 but were postponed until yesterday’s announcement.

CHILE: The World Bank released yesterday the conclusions of an external evaluation that found it had not shown political bias when assessing countries’ competitiveness. In January, the bank’s chief economist, Paul Romer, had to resign after he suggested methodological changes with political motivations had affected the ranking of Chile’s socialist governments led by former president Michelle Bachelet.

BRAZIL: A new operation against organized crime was launched yesterday in several of Rio de Janeiro favelas as part of a military intervention ordered by President Michel Temer in February. About 3,700 soldiers, plus police officers, flooded the favelas this week.