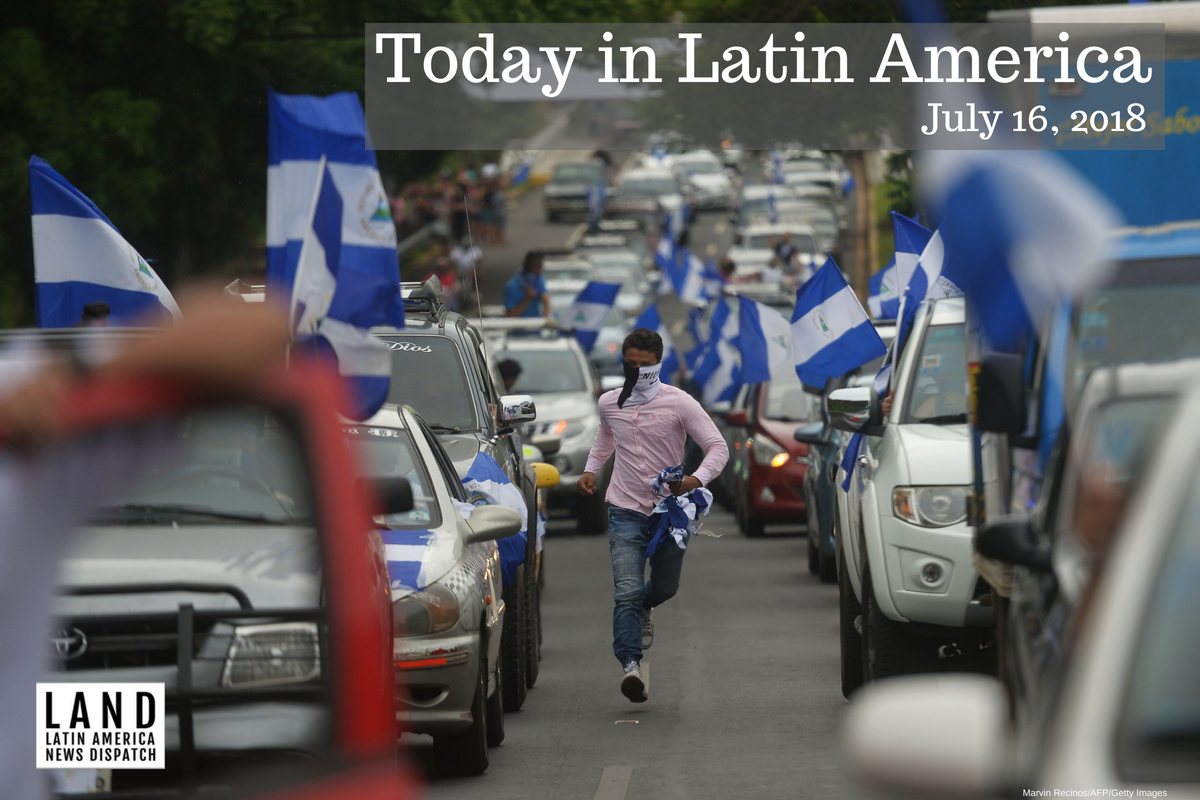 A demonstrator runs between two lines of cars during the march in cars and motorcycles from Managua to Ticuantepe, demanding the resignation of President Daniel Ortega and the end of the state repression, on July 15, 2018. (Photo by Marvin Recinos/AFP/Getty Images)

NICARAGUA: After a day of national strike, police forces tried to vacate the National Autonomous University of Nicaragua, which has been occupied by students during two months of protests. Some students were attacked by pro-government paramilitary groups and sought refuge in the church of Jesus of the Divine Mercy in Managua on Friday. More than 200 students, plus some priests and journalists, became trapped in the church overnight, which continued to be under attack resulting in the deaths of two students.

Over the weekend, combined forces of police and paramilitary groups launched new raids to clear protesters’ barricades in the towns that surround the city of Masaya leaving up to ten deaths, including four members of the security forces. And on Sunday, the car of Abelardo Mata, the Roman Catholic bishop of Esteli and one of the members of the National Dialogue conference mediating between the government and the opposition, was shot at by paramilitaries. The bishop and his driver were unscathed. And peasant leader Medardo Mairena, who was arrested on Friday, appeared in a closed court on Sunday where he was accused of terrorism. During a protest over his arrest on Friday, his brother was shot in the chest by snipers.

MEXICO: President-elect Andrés Manuel López Obrador announced yesterday he is slashing his monthly salary to less than to half of what current president Enrique Peña Nieto makes as part of an austerity push in government. López Obrador said he will earn 108,000 pesos a month, $5,707 at current exchange rates, and no public official will be able to earn more than the president. He will also cut back on chauffeurs, bodyguards and private medical insurance for high-level government officials and eliminate pensions received by former presidents.

HAITI: Prime Minister Jack Guy Lafontant and other cabinet members resigned on Saturday after days of violent protests against fuel price rises during which at least seven people were killed. President Jovenel Moïse said later that day that he will “form an inclusive government whose mission will be to alleviate the misery of the Haitian people,” and that he had spoken with protesters and the International Monetary Fund to find a solution.

CUBA: The government revealed on Saturday details of the new constitution that is being drafted to replace the 1976 Constitution. Executive power will be divided between the newly created role of prime minister and the president, who will now have a limit of two consecutive five-year terms. Central planning and state enterprise will be reaffirmed as a central part of the economy, but private property and free market will be recognized. Discrimination based on gender, ethnic origin or disability will be banned and the justice system will operate on the presumption of innocence.

COSTA RICA: Heavy rains have left 600 people in temporary shelters and thousands without electricity, phone services and running water. At least 16 landslides, including four of major proportions, blocked the road that connects the capital San José with Puerto Limón, the country’s main port on the Caribbean Sea.

COLOMBIA: The former rebel commanders of the FARC made their first appearance at the special peace tribunal created by the peace process on Friday to respond to charges of kidnappings and forced disappearances. The procedural hearing for “Case No. 001” was attended in person by three of the 31 leaders—Timochenko, Pablo Catatumbo and Carlos Antonio Lozada—, and by Jesús Santrich through a live television feed from inside the detention center where he is held on charges of drug trafficking, while the other leaders were represented by their lawyers.

PERU: Minister of Justice Salvador Heresi presented his resignation on Friday after local media released a recording of him talking to Justice César Hinestroza, who is embroiled in the scandal of corruption in Peru’s highest courts that erupted a week before. The audio clips that have caused the scandal were recorded by the police as part of an investigation into a drug trafficking organization but were sent to journalists anonymously.

CHILE: Authorities arrested on Thursday a prominent Roman Catholic priest who is accused of sexually abusing and raping seven children, some of whom are his relatives. Oscar Muñoz was once the chancellor of Santiago’s archbishopric and he was initially investigated by the Catholic church after he admitted to having abused a minor back in January, but although the case was referred to the Vatican it was never reported to Chilean authorities, who only got involved in June after seizing church case files on the scandal. Prosecutor Emiliano Arias is investigating 14 other suspended priests in the diocese of Rancagua, 60 miles south of Santiago, for allegedly participating in a network of abuse.