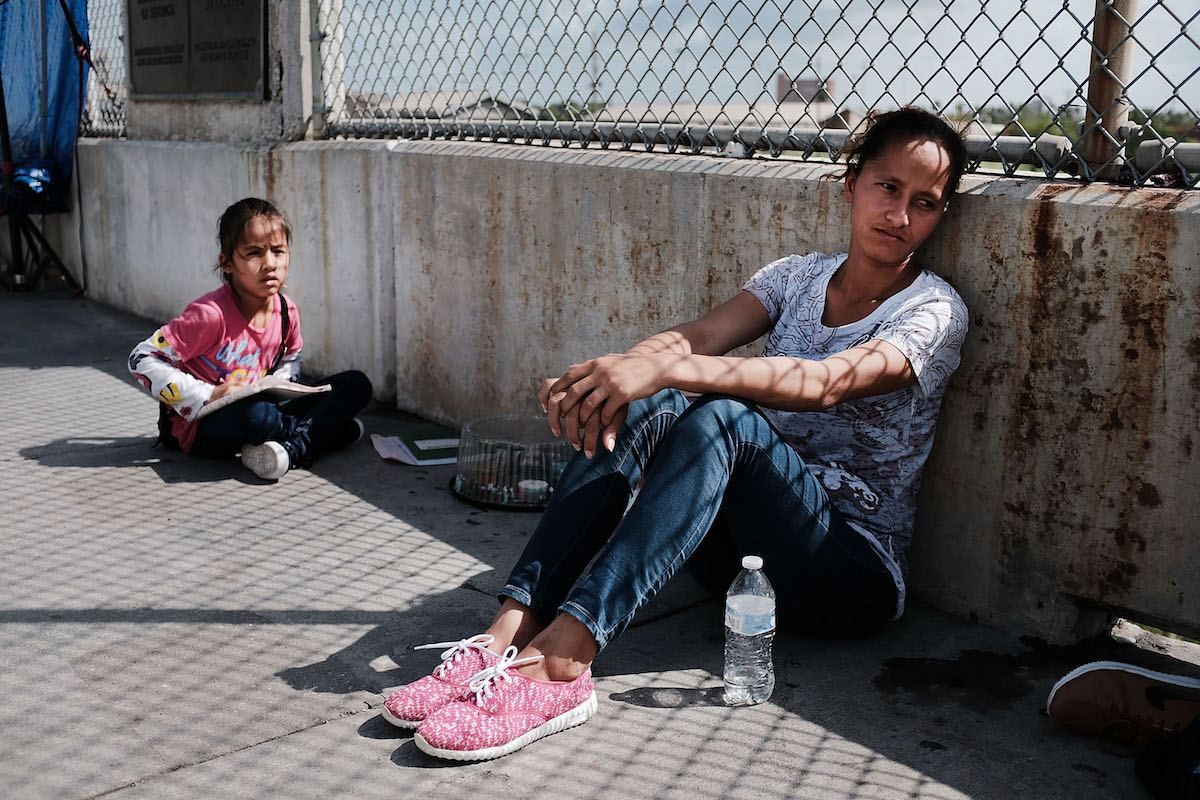 A Honduran woman, fleeing poverty and violence in her home country, waits along the border bridge with her family after being denied entry into the U.S. from Mexico on June 25, 2018 in Brownsville, Texas. (Photo by Spencer Platt/Getty Images)

Gang violence and expanding criminal networks have made El Salvador, Honduras and Guatemala —an area of Central America known as the “Northern Triangle”– some of the world’s most dangerous countries.

Murders have generally declined across the Northern Triangle in recent years. Yet thousands of Central Americans each month make a risky trek across Mexico to seek asylum in the U.S. from what is still pervasive violence in their home countries.

The continued influx spurred Attorney General Jeff Sessions to say that, “the immigration system is being gamed,” suggesting that migrants were only pretending to flee violence to gain asylum in the U.S. The Trump administration has adopted a “zero tolerance” policy of arresting and prosecuting all migrants as criminals.

But life is actually getting more dangerous for some Central Americans: Teenagers.

Why Families and Children Flee

My research in the Northern Triangle shows that homicide rates among people aged 19 or younger have been steadily rising since 2008. Youth homicides in the region are now over 20 per 100,000—that’s four times the global average.

Put another way, Central American children are 10 times more likely to be murdered than children in the United States. Kids aged 15 to 17 face the highest risk of death by homicide.

I believe this disturbing, little-discussed trend explains why so many families and young people continue to arrive at the U.S. border, despite knowing the perils that await them on their journey and in U.S. immigration courts.

Children in Honduras, El Salvador and Guatemala are in so much danger that crossing a thousand miles of Mexico —a journey during which 60 percent of women and girls will be assaulted physically, sexually or both— apparently seems like a better bet.

I already knew from other research that an increase in overall violence in the region causes additional unaccompanied child migrants. To find out whether record-high youth murder rates were impacting migration patterns among children and families, I paired U.S. Custom and Border Protection data on over a million individual apprehensions with homicide data from the Northern Triangle and Mexico.

The results suggest that targeted violence against children is the main reason that families and unaccompanied minors decide to migrate.

Up at the U.S.-Mexico border, the number of families and solo children apprehended likewise increased, by 40 percent.

The next year, in 2015, child homicide rates in Central America declined 13 percent. Apprehension rates at the U.S.-Mexico border dropped back to pre-2014 levels, down 40 percent.

Excluding Other Drivers of Migration

My analysis on child and family migration controls for other reasons people might decide to go to the United States, such as generalized violence, poverty and family networks.

I also tested alternative explanations for migration patterns among young people and families, such as changes to U.S. legislation that might make migrating more appealing or sudden economic opportunity for migrants. The timing did not line up for either.

These and other factors certainly do figure into Central American migration trends. Child murder rates in the Northern Triangle do not explain all migration among young people and families.

But I believe they are the driving force behind it.

Consecutive U.S. presidents have tried simply to stop asylum-seekers by making migration to the U.S. unappealing.

Migrant numbers have risen and fallen since then, but the trend among children and families is upward.

An estimated 8,391 families and 15,625 unaccompanied minors were apprehended at the border in 2011. Six years later, in 2017, these numbers had increased to 63,411 families and 33,012 solo children, according to Customs and Border Protection data.

The Trump administration has taken even more punitive approach to immigration, including separating children from their families. Yet 2018 is currently on track to break last year’s record for the total number of migrant families and children apprehended at the border.

My study suggests that virtually no immigration policy could scare some Honduran, Salvadoran and Guatemalan parents more than everyday life already does.

Ultimately, securing American borders will mean making the most vulnerable citizens of Honduras, Guatemala and El Salvador more secure, too.