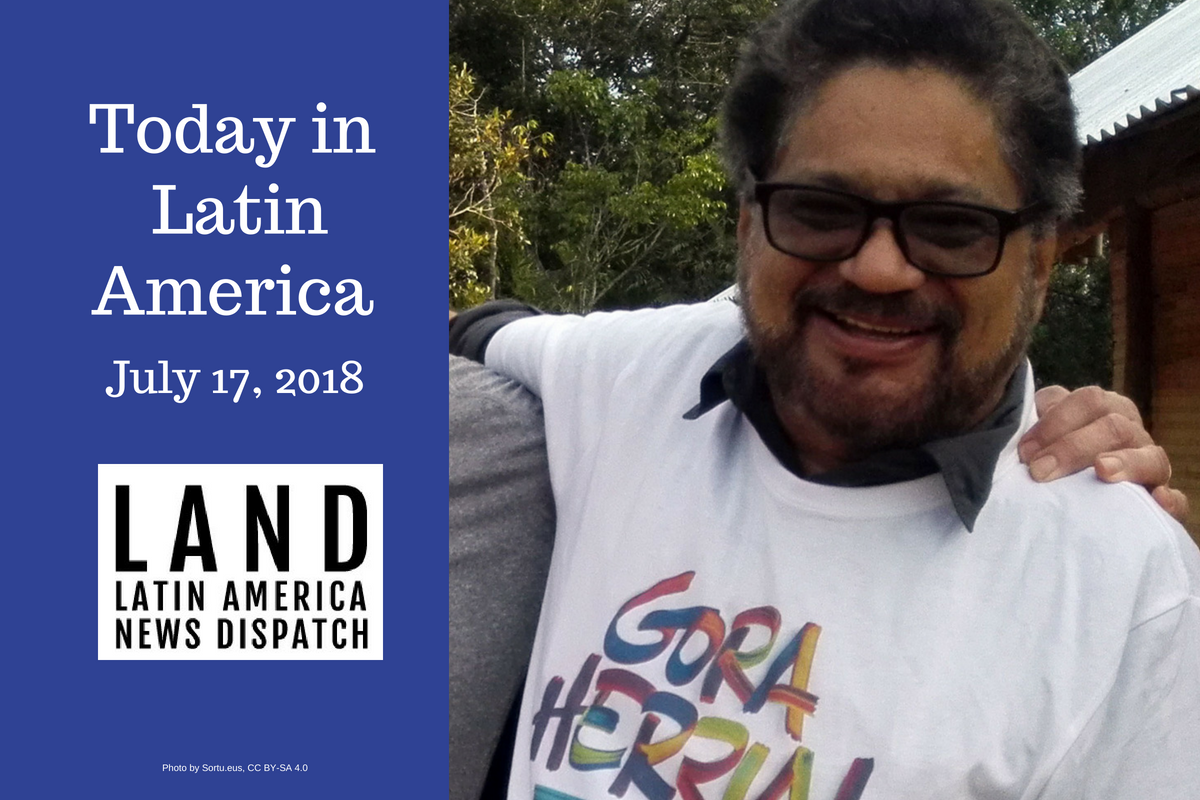 COLOMBIA: Iván Márquez, the former chief negotiator of the FARC, confirmed yesterday that he renounced one of the 10 Congress seats that the former rebels were awarded as part of the peace agreement signed in 2016. In a letter made public yesterday, Márquez said Colombian and U.S. authorities of had staged a “judicial set-up” against imprisoned FARC leader Jesús Santrich, who is accused of planning to export 10 tons of cocaine into the United States after the peace process was finalized with the help of a nephew of Márquez (who was never part of the guerrilla group). Márquez also criticized the Special Peace Justice created under the agreement but altered after the Colombian people rejected it in a referendum.

During the installation of the new Congress this Friday, Márquez’ seat will be taken by Benkos Biohó, another former commander of the FARC. It is not clear what will happen with Santrich’s seat, as he hasn’t been convicted of a crime and is therefore not legally forbidden from taking office but because he was not granted bail he cannot attend the swearing in ceremony. If he is convicted, the FARC may lose the right to that seat.

MEXICO: Olga Sánchez Cordero, who President-elect Andrés Manuel López Obrador has announced as the future Government Secretary, said yesterday that she plans to seek to decriminalize abortion in the first trimester of pregnancy. Mexican federal law allows abortions when a pregnancy is the result of a rape or when the life of the mother is in danger, but 18 states have laws that protect the right to life from the moment of conception. Only Mexico City freely allows abortion up to the 12th week.

MEXICO: Mourners at a funeral home in Fresnillo in the north-central state of Zacatecas were attacked by gunmen on Sunday. Five died and 17 were wounded when they were gathered for a funeral service for a man killed the day before in a shooting at a bar.

DOMINICAN REPUBLIC: Thousands marched through the streets of Santo Domingo on Sunday playing drums and honking cars to demand the decriminalization of abortion when there is a threat to the life of the mother or the fetus and when the pregnancy is the result of rape or incest. The rally was organized by the Coalition for the Rights and Life of Women, an umbrella for more than 100 different groups.

NICARAGUA: The relatives of the victims of the weekend’s violence walked down the main streets of Managua yesterday carrying their coffins, while hundreds of people accompanied them, calling for justice. U.N. Secretary-General Antonio Guterres denounced yesterday the “unacceptable” use of lethal force against citizens by groups linked to Nicaragua’s government. Also, the U.S. State Department said the government of President Daniel Ortega should hold elections immediately, following citizen’s demands.

PANAMA: Hundreds of people took to the streets of Panama City to continue protesting against a hike in electricity prices that was announced by authorities two weeks ago. Although the hike was postponed, protesters want it eliminated. On Friday, President Juan Carlos Varela ordered the suspension of the raise until the National Assembly approves it. The chief of the National Authority of Public Service had to present himself to the National Assembly yesterday and will continued answering lawmakers’ questions today.

PERU-COLOMBIA: Authorities in Lima declared a state of emergency yesterday in the province along Peru’s northeastern border with Colombia because of the presence of FARC dissidents and drug traffickers. A raid organized between the police forces of both countries yielded 51 arrests and the destruction of four clandestine cocaine production laboratories. The state of emergency in the area along the Putumayo River that divides the two nations will last 60 days and under it, the constitutional rights to movement and assembly and the inviolability of the home will be suspended.

COLOMBIA-VENEZUELA-UNITED STATES: The U.S. Agency for International Development announced yesterday that it will be donating an additional $6 million for Venezuelan migrants in Colombia. The United States have given nearly $56 million to humanitarian groups and Latin American nations since the start of 2017. Half of this money has gone to Colombia, where most of the Venezuelan migrants have arrived. About half of the new funding is expected to go toward providing food, while the other half will help Colombia provide medical services. Venezuelan President Nicolás Maduro has rejected offers for humanitarian aid to stem the crisis, demanding that the United States lifts its economic sanctions that he accuses of causing the crisis.

ARGENTINA-CHILE: Argentine authorities announced yesterday that they arrested a former Chilean army colonel convicted of crimes against humanity committed during the dictatorship of Augusto Pinochet. Sergio Francisco Jara Arancibia was found guilty last year by Chile’s supreme court of the murder of a doctor and a public official opposed to the regime, but had been on the run since. Jara Arancibia was the subject of an international arrest warrant and will be extradited to Chile.