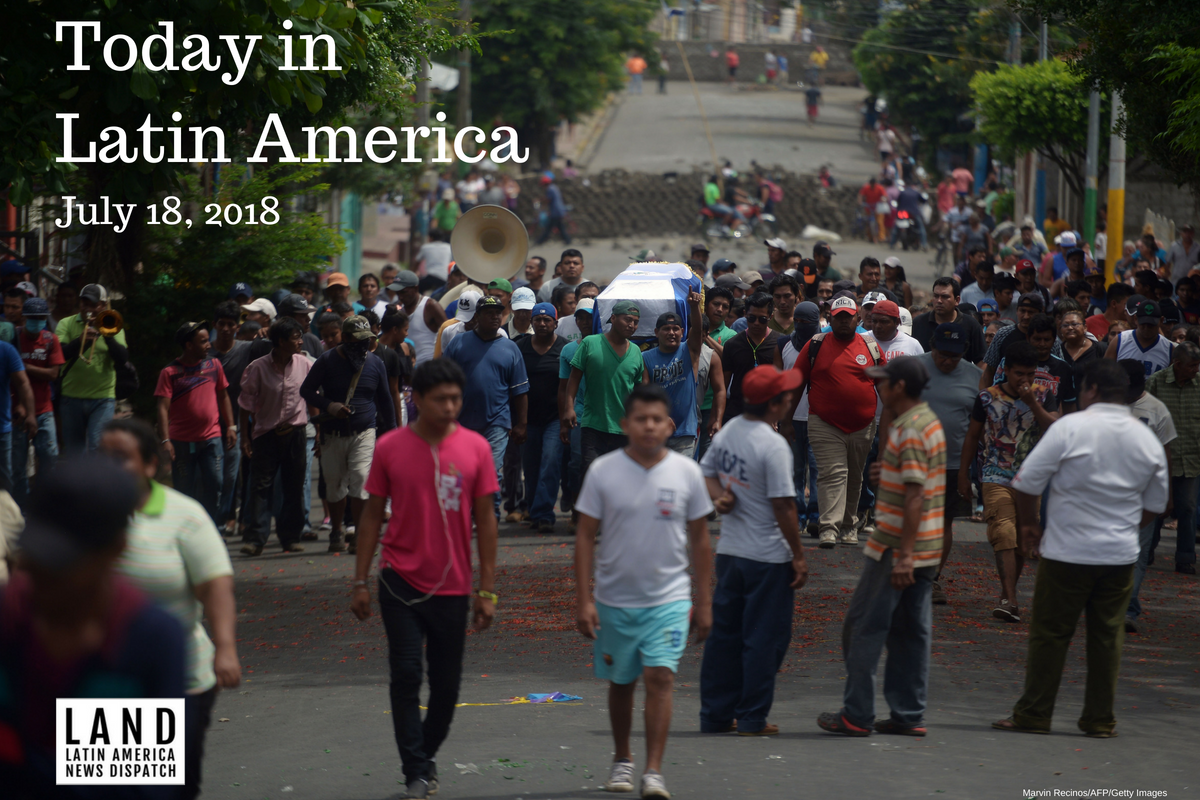 Friends and relatives carry the coffin of Jose Esteban Sevilla Medina, who was shot dead during clashes with riot police and paramilitaries at Monimbo neighbourhood in Masaya, some 35 km from Managua, on July 16, 2018. (Photo by Marvin Recinos/AFP/Getty Images)

NICARAGUA: Ahead of the celebration of the 39th anniversary of the Sandinista revolution on Thursday, the government of current president and former Sandinista leader Daniel Ortega took back the city of Masaya by force. Masaya, once the stronghold of the Sandinista rebels and an important part of the revolution’s mythology, had become in the last few months the bastion of anti-Ortega rebels. Bombs rained for hours on the indigenous neighborhood of Monimbó and hundreds of police forces and militia supporters teared down the cobblestone barricades the rebels had set up.

The Nicaraguan Pro-Human Rights Association said that it had confirmation of at least three dead people — a policeman, a 15-year-old boy and a woman who was standing outside her home — but it hadn’t been able to enter the city besieged by pro-government “combined forces” made up of official and paramilitary groups. The human rights group also said 40 people had been detained by the government.

The United Nations’ human rights office called for an end to the violence, spokesman Rupert Colville said, “A wide range of human rights violations are being committed including extrajudicial killings, torture, arbitrary detentions, and denying people the right to freedom of expression.” Colville blamed the government and its supporters of the majority of violations. The government of Daniel Ortega has, however, also accused the protesters of torturing and killing police officers.

MEXICO: With 2,890 killings, May of 2018 became the month with the highest number of murders since records are being kept in Mexico. The U.S. State Department raised its travel alerts recommending its citizens no to travel to five Mexican states — Colima, Guerrero, Sinaloa, Tamaulipas and Michoacán — and to reconsider traveling to 11 others which include Chihuaha, Coahulla, Durango, the state of México, Jalisco, Morelos, Nayarit, Nuevo León, San Luis Potosí, Sonora and Zacatecas.

MEXICO: Thirteen people were killed in the southern state of Oaxaca during a land dispute between the small rural communities of San Lucas Ixcotepec and Santa María Ecatepec. The two villages have been fighting over agricultural land since the 1970s but disputes have intensified as drug crop cultivation has increased in the area.

CUBA: The Mexican company that owned the passenger plane that crashed in May when flown by Cubana, Cuba’s national airline, attempted to blame the crash on human error, but was contradicted by the Cuban-led commission of Cuban, Mexican and U.S. agencies investigating the crash. The commission said the announcement made by Damojh, the Mexican plane-leasing company, was speculation and that “any affirmation about possible causes of this fatal accident is premature.” The accident happened on May 18 and killed 112 people.

EL SALVADOR: The Supreme Court of Justice accepted a petition to re-open the case of the murder of revolutionary poet Roque Dalton by his own peers in the ERP, one of the rebel armies that later formed the FMLN guerrilla front. Dalton was killed in 1975 after the group’s revolutionary junta accused him of being a revisionist, a Cuban agent and a collaborator of the CIA.

PERU: President Martín Vizcarra cited lawmakers for an extraordinary session on Friday to discuss the impeachment of all the justices in the National Council of the Judiciary, the entity in charge of appointing, ratifying and dismissing the nation’s judges after a corruption scandal broke last week. Also on Friday, the president will establish a committee of experts that will be charged with preparing a proposal to reform the legal system by the following week.

BRAZIL: The infant mortality rate rose by nearly 5 percent between 2015 and 2016 according to government figures published yesterday, this is the first time the number of children dying in their first year of life has risen in Brazil since 1990. Health officials and specialists blame the rise on the outbreak of the Zika virus in 2015 and on cuts to health services because of the economic crisis the country is still going through.

BRAZIL: The mother of a soccer player in the World Cup squad known as Taison was kidnapped on Monday night by an armed gang in the city of Pelotas, in the southernmost state of Rio Grande do Sul, on the border with Uruguay. Rosângela Freda was released within hours of the abduction, before the gang even issued a ransom demand, by police officers who spotted the getaway vehicle and were able to locate the place where she was being held.

ARGENTINA: The airport of the resort city of Mar del Plata was evacuated after a  marijuana grinder shaped like a grenade was discovered. Someone had apparently discarded the object that triggered the panic before boarding a plane.