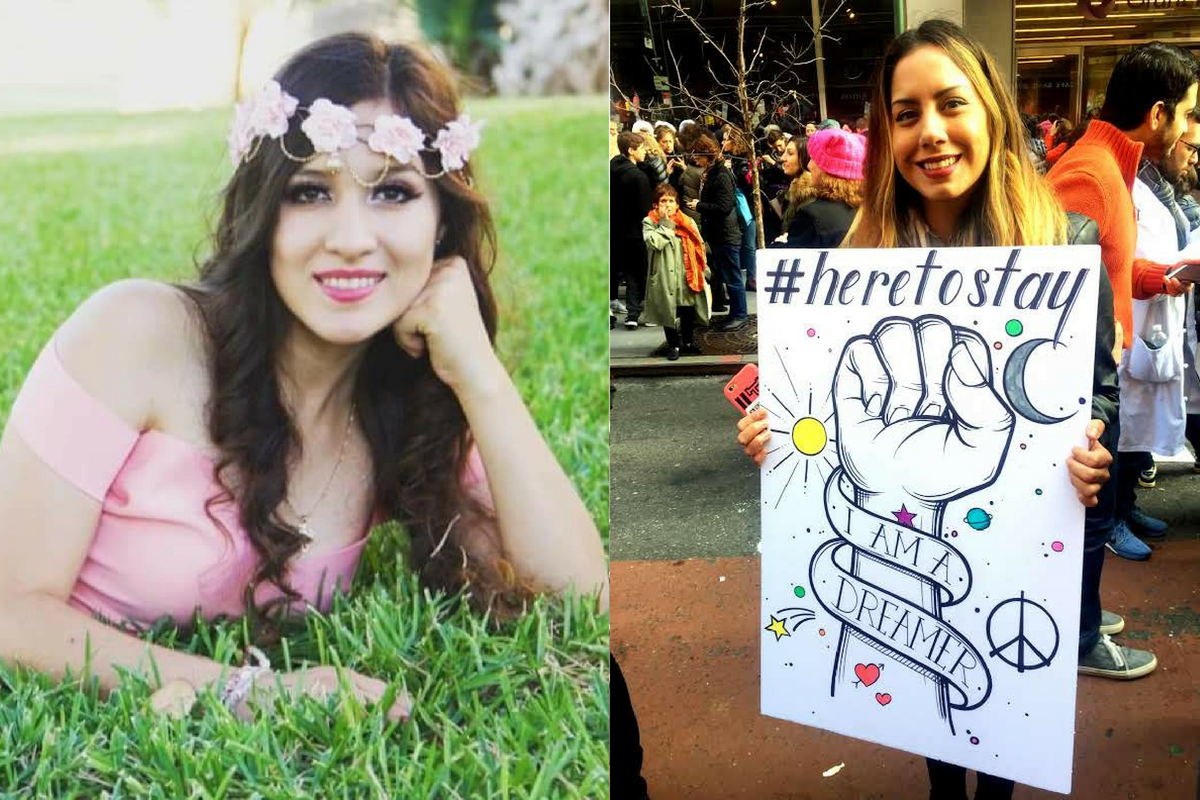 Editor’s Note: Nahiely asked that her last name not be used in the article.

With her light brown hair cascading down, a face glowing with pink and gold hues and donning a dress with white, pink, blue and black stripes, Nahiely “Pinky,” headed to audition for a beauty pageant unlike any other. It was the morning of July 13 in Chicago, and Nahiely, like many other young immigrant women granted permission to live in the country by the government, was giddy as she waited in line to possibly take part in Univision Network’s Nuestra Belleza Latina 2018.

This year’s event welcomed contestants regardless of weight, age or physical beauty. Nahiely couldn’t wait for the opportunity to shine and neither the hours-long wait nor the fact that she had to wear sandals instead of heels as she healed from a recent bicycling accident, could put a damper on the day.

The 23-year-old excitedly sang her mom a song via an Univision interview while she waited. She thought about the endless opportunities that could come from participating in the contest. Nahiely and, as she later learned, other young immigrant women who were often shunned from opportunities due to their legal status felt they finally could participate in something they were passionate about, without limits or excuses, as the promotions said.

But when Nahiely finally reached the registration line she was told she could not audition without proof of U.S. citizenship or residency.

“Once inside [the facility] we were told DACA recipients would not be allowed. I thought, ‘Well, I have protection under the Violence Against Women Act, which is usually accepted for workplace and scholarship forms,” Nahiely told Latino USA.

When she learned only contestants with legal residency or U.S. citizenship would be allowed, regardless of legal status via permits such as hers, Nahiely’s heart sank. She felt her face turn bright red.

“I didn’t really understand but I also didn’t want to ask too many questions. I felt too embarrassed,” she said. “All the girls are there looking at you and you waited so many hours just to be rejected.”

Staff returned her paperwork. Nahiely was humiliated and in shock.

“I was trying to take it in the most mature way. I have a personal motto to, ‘Always wear your invisible crown.’” She held her head high and exited the premises.

Not the First Rejection

Originally from Monterrey, Nuevo Leon, Mexico, Nahiely’s family arrived in the Rio Grande Valley when she was only four years old. She grew up a proud Texan, but without a sense of full belonging on the American side, or the Mexican side. She was used to rejection.

Nahiely was in Junior ROTC throughout high school and applied to join the US Marines but was rejected for lack of appropriate legal documentation. Univision’s rejection felt different because she felt she was led on.

“You don’t expect your own community to reject you. The same community that advocates for you. A lot of people who work for Univision show their support for DREAMers on Facebook,” she said.

“It was a wake-up call, but, it felt very unreal.”

Nahiely said she’s no stranger to obstacles and those challenges have only made her stronger.

She founded Strides For Fany campaign after losing her sister and young nephew to criminal violence. The campaign aims to reduce crime, vandalism, theft and gang activity in the area.

Nahiely also switched her major at the university she attended from education to criminal justice. Her campaign helped land her a job in the Victims’ Unit of the District Attorney’s Office in Hidalgo County.

This year, renewal of her VAWA permit got delayed, and instead of sulking, Nahiely decided to take a break from work. That’s when a friend approached her about auditioning for Nuestra Belleza Latina.

But she hit a wall there too.

“Everything that I’ve gone through has made me stronger but other DREAMers don’t have the same mentality as I do. Some people can really break down and I don’t want anybody else to go through this,” she said.

Nahiely was initially going to treat the audition fiasco as yet another rejection and another setback in her life. Then she came across Melissa Silva’s post on Instagram about Nuestra Belleza Latina not allowing DREAMers to audition, and a fire was lit.

This is what a #DREAMer looks like. Today I was planning to audition for @nuestrabellezalatina. It’s a beauty show in @univision, and this year, they are not only focusing on the physical, but also on internal beauty. For this reason and because there was no age limit this year, I was prepping mentally, physically and spiritually for the past couple of months. I was so excited to share my story as a DREAMer, as a woman that’s part of the #metoo movement, and as someone who has made many mistakes, but has been redeemed by the one and only.☝?I was READY! But although I am now in this country legally, #DACA recipients do NOT qualify for the competition. I was smacked with the truth of my situation once again, but this time, the saddest part is that I received the rejection from the Spanish-language broadcast television network I grew up watching, #Univision. I expected this from other American networks, but not from the one aimed specifically for Hispanic Americans. It’s sad that they advocate for DREAMers and then close the door in front of our faces. I wish the best to all of the contestants at this year’s #NuestraBellezaLatina. I will continue chasing my dreams. I’ll end with a quote that has helped me maintain a grateful mindset, “Instead of wondering when I’ll attain the thing I’m working toward, I dwell on the wonderful things God has already done.” ??

“We don’t want to attack or take revenge on Univision. We just don’t want to have any more DREAMers go through this humiliation,” Nahiely said.

The young women succeeded in their mission.

Moments before the deadline to register, Univision reached out to Latino USA to announce a tentative change to Nuestra Belleza Latina’s official program guidelines.

“We are modifying our program guidelines to include individuals who are authorized to work in the United States for multiple employers, which would include Dreamers,” wrote spokesperson Rosemary Ravinal. “As the leading media company serving Hispanic America, Univision has taken a firm public stand in favor of Dreamers and permanent protection of the DACA program. And we value the special connection Univision has established with its audience, including Dreamers who may want to participate in our programs.”

In another follow-up email Univision confirmed that the guidelines have been changed:

“This matter was an oversight on our part and we thank you for bringing this to our attention in time to make the necessary modifications.”

Before Univision responded, Melissa Silva recruited fellow immigrant women for some type of action, including a potential peaceful protest, and reached out to Latino USA in hopes of getting that very response.

Silva has watched all 10 seasons of Nuestra Belleza Latina and dreamed of participating ever since she was 19 years old.

But the now 30-year-old says she could never participate because she was an undocumented immigrant. After receiving her work permit and social security card in 2013 as a result of DACA, she decided to focus on her marketing career instead.

Auditioning for Nuestra Belleza Latina remained in the back of her mind.

“Looking at people like myself who are Latinas and who grew up in this country resonated with me,” Silva said.  “There was just something special about a beauty pageant like this one.”

Despite her yearning for beauty pageantry, Silva chose the rational route and worked in marketing for eight years. She heard about the changes to the contest’s requirements just as she had reached a crossroad last winter.

So, she began preparing for the possible competition of a lifetime.

“They weren’t really about your looks and that was a strong motivator for me. They said that if you are a woman over 18 years of age, have talent, charisma and a good personality, that your moment had arrived. The motto for this year was, ‘Sin Tallas, Sin Limites y Sin Excusas,’” Silva said.

She decided the day of the audition – July 16th – would be the day her life would change for the better. She trained physically by running. She practiced her singing voice. She prepared mentally and spiritually.

“I’d never done anything like this before. I never went for it,” said Silva, who works as a marketing manager at Practising Law Institute in New York. But then a friend told her not to bother auditioning because she would get rejected due to her legal status.

“It’s crazy that we can work and do so much, but we can’t join a competition made by our own people,” Silva said.

She, too, was used to rejection and had lost a couple of jobs over her legal status.

But the Peruvian native wanted to share her story with the public. She grew up undocumented and suffered many setbacks. She, too, saw Nuestra Belleza Latina as her time to shine.

“I always worked on Plan B and never risked Plan A. But in the show, I wanted to represent what it means to be a Latina woman in America, a DREAMer … una soñadora,” Silva said.

Now, instead of leaving the audition line and watching the World Cup with her family in New Jersey, Silva may get a second chance at her dream.

When Speaking Up Pays Off

Silva said there were several other young immigrant women with similar experiences who were afraid to speak out. But she and Nahiely both took a risk and it paid off. Now she is realizing that speaking out and advocating for what’s right is the only way to go.

“I am extremely excited right now and I can’t believe it. Wow, it’s just incredible,” she exclaimed on the phone with Latino USA, shortly after news of Univision’s response.

Fighting back tears, she said she has proof that it only takes two people to make a difference.

“It’s crazy. It’s beautiful. I’m really, really happy because we grew up undocumented, we grew up not saying anything and always fearful to speak up,” she said. “DACA gave us a little bit of a voice and I think Millennials are all about saying stuff and bringing things to light.”

Silva is waiting to try auditioning again as soon as Univision makes an official announcement about its changes.

“I’ll fly over there. I’m not going to lose this opportunity especially since we wanted it so bad.”