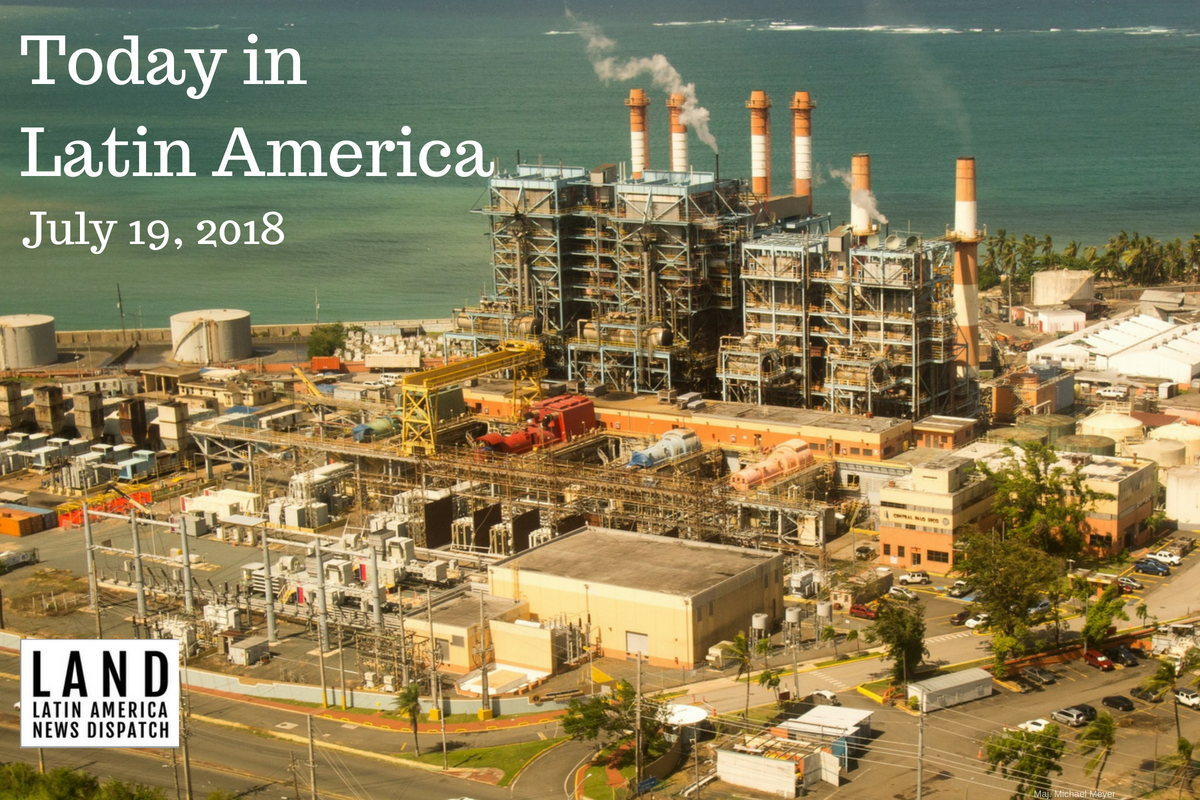 PUERTO RICO: The Puerto Rico Electric Power Authority has had three CEOs in just over a week, five since last November when Hurricane Maria tore through the Antilles. Yesterday, Gov. Ricardo Roselló named José Ortiz, a former director of the archipelago’s water and sewer company and a former president of the power company’s board, as the company’s CEO after his predecessor, Rafael Díaz-Granados, lasted only one day in the position.

Last week there was a controversy when CEO Walter Higgins, who was supposed to be making a $450,000 salary plus bonus, resigned when the U.S. territory’s legislature prohibited him from receiving a bonus from the bankrupt company. The company’s board then decided the new CEO would receive a $750,000 annual salary, effectively circumventing the bonus prohibition but prompting an outcry as Puerto Rico has endured an 11-year recession and is facing austerity measures imposed by a federal control board. Gov. Ricardo Roselló issued a statement saying that the salary was inappropriate and that any board member who disagreed should step down: Díaz-Granados and five of the seven board members resigned. Ortiz will be receiving a $250,000 salary with no bonuses which he has said is “adequate” given Puerto Rico’s situation.

MEXICO: The National Electoral Institute imposed yesterday a $10 million fine on Morena, the party of President-elect Andrés Manuel López Obrador, for allegedly diverting money from a trust fund created for the victims of last year’s earthquake to party members. It is illegal for political parties to give out money but Morena says it was a private fund that was not run by the party and plans to appeal the fine. Current president Enrique Peña Nieto’s party, the PRI, was also fined almost $2 million for withholding the salaries of state workers in Chihuahua and redirecting almost $800,000 to the party itself. The state governor at the time, César Duarte Jáquez, fled the country immediately after he finished his tenure and his party lost the state elections in 2016, he is facing 11 charges and has three outstanding warrants for his arrest.

MEXICO: Authorities recovered the radioactive material that was stolen two weeks ago from a vehicle belonging to a radiography supplier in Mexico City. Mexico City’s civil defense office said an anonymous person called and offered to return the material, which was retrieved unopened.

DOMINICAN REPUBLIC: Brigadiers collected almost 950 tons of garbage from the coasts of Santo Domingo that were dragged there by the Ozama river after Tropical Storm Beryl passed through the region at the beginning of last week.

NICARAGUA: The Organization of American States adopted a resolution yesterday condemning the Nicaraguan police and armed pro-government civilians for human rights abuses committed against anti-government protesters. The resolution was proposed by the United States, Argentina, Brazil, Canada, Chile, Colombia, Costa Rica, Mexico and Peru and of the 34 members of the OAS Permanent Council it received favorable votes from 21 members and three rejections by Nicaragua, Venezuela and St Vincent and the Grenadines. Also, seven member states were present but abstained from the vote and three were absent. The resolution, which also asked the government to accept the opposition’s proposal of moving the 2021 elections forward to  March 31, 2019, was rejected by the Nicaraguan Foreign Minister Denis Moncada as “illegal, illegitimate and unfair.”

VENEZUELA: Public servants working for the national power company announced yesterday they will be joining a national strike beginning next Monday demanding raises to offset the daily inflation of 2.8 percent. Yesterday, workers belonging to different sectors of the state—healthcare, education, telecommunications, among others—staged protests in different parts of the capital.

VENEZUELA: President Nicolás Maduro said on Monday that universities shouldn’t be graduating students who don’t study careers that are useful for the country’s development, and asked his aides to make sure universities get in line with the national development plan. Priority should be given to studies that are related with economic and industrial development, agricultural industries, sciences, technologies and the rights to health, education, culture and housing. Workers in the 20 major universities in Venezuela, all of which are tuition-free, have been engaging in on-and-off strikes for the past 22 days demanding pay rises to equal inflation.

PARAGUAY-BRAZIL: The head of Brazil’s biggest and most powerful organized crime gang, the First Capital Command, was arrested yesterday in Asunción, the capital of Paraguay. Eduardo Aparecido de Almeida, known under the alias Pisca, had apparently lived in Paraguay for at least a month although there’s no registry of his entry to the country and even had an active police officer as his private bodyguard. The First Capital Command is active in Brazil, Paraguay and Bolivia.