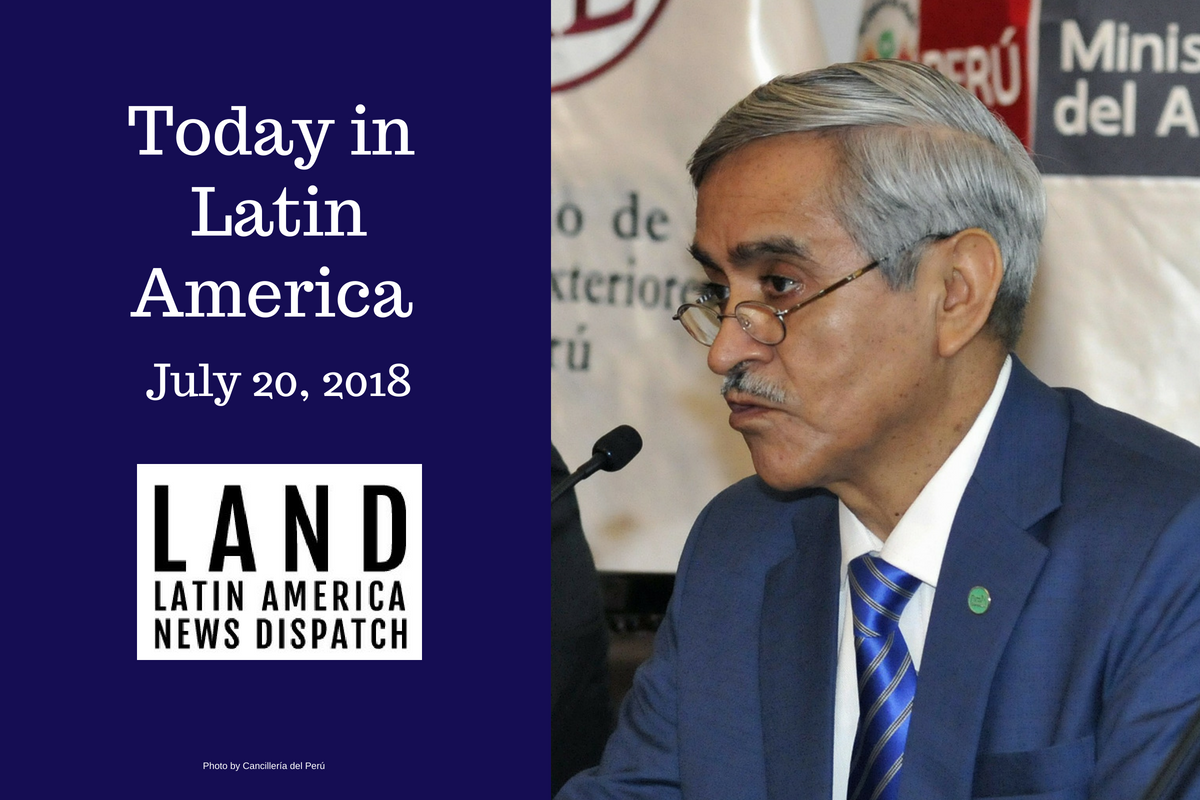 PERU: The head of Peru’s judicial branch, Judge Duberlí Rodríguez, resigned yesterday in the wake of the corruption scandal that began almost two weeks ago when audio clips were released showing illegal negotiations and influence peddling by the highest judges of the nation. Rodríguez was the president of the Supreme Court. The scandal also led three members of the National Council of the Judiciary to resign yesterday morning. Earlier in the week, two other justices of the seven members of the council at the center of the scandal had quit, one was suspended and only one remains in place. On Wednesday the legal system as a whole declared a 90-day state of emergency that will allow profound but still undefined changes to be enacted.

Over 5,000 people, and possibly tens of thousands,  marched yesterday through the streets of Lima and other cities protesting against the corrupt legal system.

MEXICO: The General Attorney’s Office in the resort city of Acapulco was attacked on Tuesday by gunmen. One of the attackers died and three were arrested. Acapulco, which is the capital of the state of Guerrero and sits 230 miles south of Mexico City on the Pacific Ocean, continues to be affected by violence despite of the fact that the Army and Federal Police were brought in to protect it during the summer holiday.

NICARAGUA: Tens of thousands of supporters of former Sandinista rebel leader and current president Daniel Ortega gathered yesterday in Managua to celebrate the 39th anniversary of the Sandinista revolution that overthrew dictator Anastasio Somoza. In former years the event had drawn as many as hundreds of thousands but this year the government did not organize caravans from other cities to bring people into the capital, even though opposition roadblocks had been cleared earlier in the week. Ortega criticized the Organization of American States, attacked the Catholic bishops who had initially served as mediators with the opposition calling them “coup mongers” and asked his supporters to remain vigilant and maintain “self-defense mechanisms.”

COLOMBIA: A group of armed men who identified as a holdout dissidence of the FARC’s 40th Front stopped a vehicle of the NGO The HALO Trust on Wednesday and forced the four passengers out before burning it. The attack happened in the municipality of La Uribe, one of the traditional strongholds of the FARC in the south-central province of Meta, where the British NGO is working with the Colombian government in the process of clearing anti-personnel mines. Meta is the province with the most abandoned anti-personnel mines in Colombia.

VENEZUELA-CUBA-SPAIN: The new Spanish government led by the socialist PSOE party announced it will change its relations with Venezuela and Cuba to foster a new climate of “dialogue,” moving away from the hard line of its conservative predecessor Mariano Rajoy, of the PP party. Spanish Foreign Minister Josep Borrell met this week with his Venezuelan counterpart Jorge Arreaza during the second summit of foreign ministers from the European Union and the Community of Latin American and Caribbean States that was held in Brussels.

CHILE: The head of the Catholic Church’s abuse prevention committee refused to surrender to the attorney general the report on sex abuse committed by priests against minors that was created at the behest of Pope Francis. Bishop Juan Ignacio González said yesterday that the 2,300-page report was only intended for the pope and could harm those who testified in secret if it its contents became public.

BRAZIL: Celebrity plastic surgeon Dr. Denis Cesar Barros Furtado, known on social media as Dr. Bumbum, was arrested in Rio de Janeiro yesterday for the death of one of his patients, bank manager Lilian Calixto. Barros Furtado injected Calixto a controversial acrylic glass filler to enhance her buttocks at his home in Rio on Saturday evening and took her to a local hospital after she fell ill, where she died several hours later. Barros Furtado is being charged with homicide and criminal association and his mother, also a medical doctor, was also arrested for assisting during the surgery.