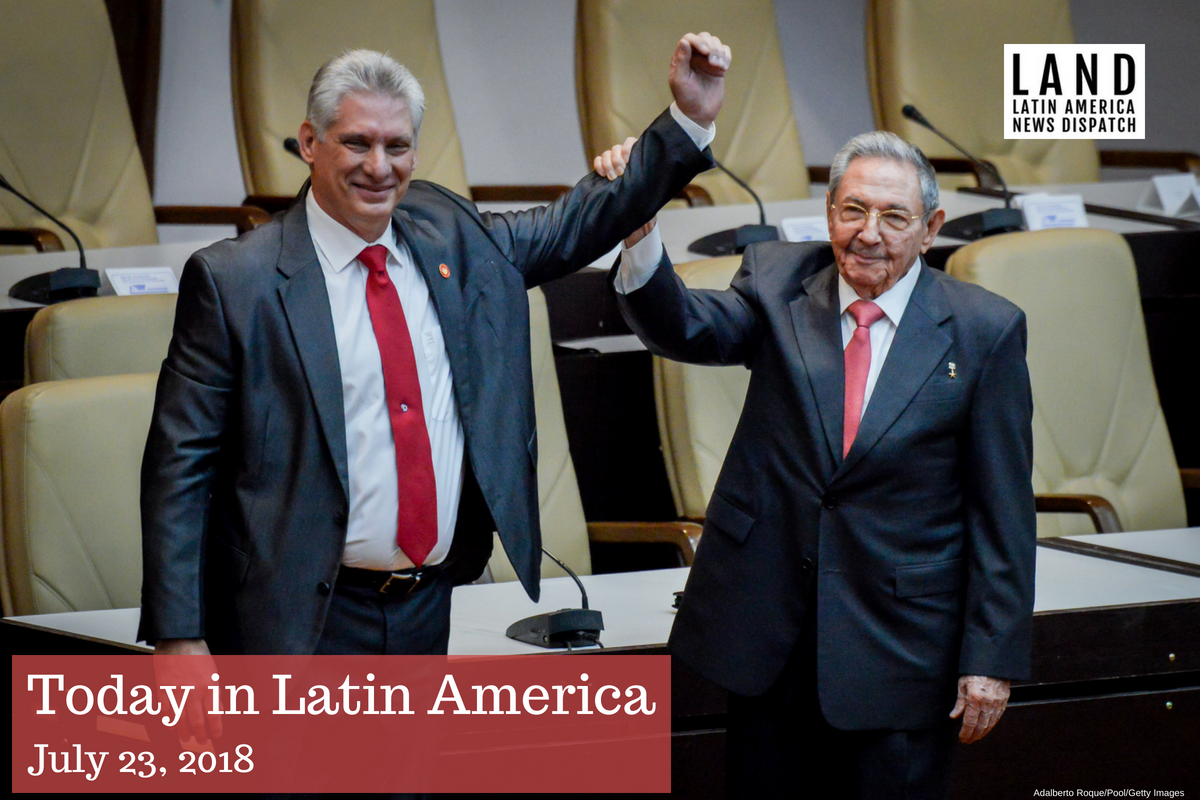 CUBA: The National Assembly received on Saturday the draft for a new constitution to replace the Soviet-era 1976 document from a commission led by Raúl Castro. The new constitution eliminates references to communism as it aims to be more in line with modern ideas of socialism, it recognizes private property for the first time since the revolution (the current document only recognizes collective forms of property) and defines marriage as between two individuals rather than between only a man and a woman, opening up the path for same-sex marriage to be legalized.

The National Assembly is expected to pass the new constitution in the coming days. Then from August 13 to November 15 it will be open to public consultation, where it could undergo changes, and a final draft will be voted on a national referendum. Lawmakers also approved on Saturday President Miguel Díaz-Canel’s new Cabinet, which keeps all the ministers from Castro’s government except for the key post of economic reform. Although Castro stepped down as president in April, he remains the most powerful person in Cuba as the leader of the Communist Party, a position he has vowed to hand down to Díaz-Canel in 2021.

MEXICO: President-elect Andrés Manuel López Obrador made public on Sunday a letter he sent to U.S. President Donald Trump proposing a plan to improve the economies of Mexico and the countries of Central America as a strategy to prevent migration. López Obrador suggested Mexico, the United States and Central American countries who want to participate create a development plan backed by a public fund, financed by the participating countries differentially according to their capabilities, to make it “economically unnecessary” for Central Americans to migrate.

PUERTO RICO: A group of lawmakers made a surprise visit to the Institute of Forensic Science on Friday as part of an investigation into complaints of backlogs and mishandling of bodies. The legislators were physically barred by employees from entering certain areas of the institute, especially the trailers stationed outside that contain 76 of 335 unclaimed bodies at the institute, some of which date back to as far as 2012. Legislators had recently approved boosting the forensic institute budget from $2 million to $3.5 million to respond to some of these issues but the federal control board overseeing Puerto Rico’s finances rejected the increase.

HONDURAS: A judge issued an arrest order on Saturday for 38 people including several lawmakers and public officials for allegedly diverting more than US$11.7 million to finance political campaigns in the 2013 elections. Authorities have not specified how many lawmakers are accused, nor their identities, but they must all appear today at a court hearing. Three of the 38 have been detained, two private citizens and a substitute member of Congress.

HONDURAS: Pope Francis accepted on Friday the resignation of Tegucigalpa Auxiliary Bishop Juan José Pineda, who is accused of sexual improprieties with adults under his authority. Pineda was the top deputy to Cardinal Oscar Rodríguez Maradiaga, one of the pope’s main advisers, who has faced charges of financial mismanagement but has been defended by Pope Francis.

COLOMBIA: Former rebel leaders of the FARC guerrilla army took on Friday the seats in the Colombian Congress they were granted by the 2016 peace agreement among criticism by former president and senator Álvaro Uribe. President-elect Iván Duque, Uribe´s protégé, has promised to reform the agreement to prohibit former rebels accused of crimes, including most of the leaders now taking seats, from sitting in Congress until they are investigated and pay for their crimes.

ECUADOR: Former president Rafael Correa appealed on Friday to the Inter-American Commission on Human Rights for protection from the order for his arrest and extradition from Belgium after he failed to appear in court in connection with a kidnapping case in which he has not been accused of committing a crime. While he was still in power, Correa denounced the commission as illegitimate.

BRAZIL: Far-right politician Jair Bolsonaro formally announced he is running for president on Sunday. The former army officer is currently in second place in the polls, with 17 percent of the vote according to the Ibope Institute, behind former president Luiz Inácio Lula da Silva, who has 33 percent of support but is unlikely to be able to run because of a corruption conviction he rejects as trumped up. Bolsonaro, who has been investigated and fined for his racist, sexist and homophobic comments, is running for the small the Social Liberal Party and his proposals for alliances have been rejected by other center-right parties.