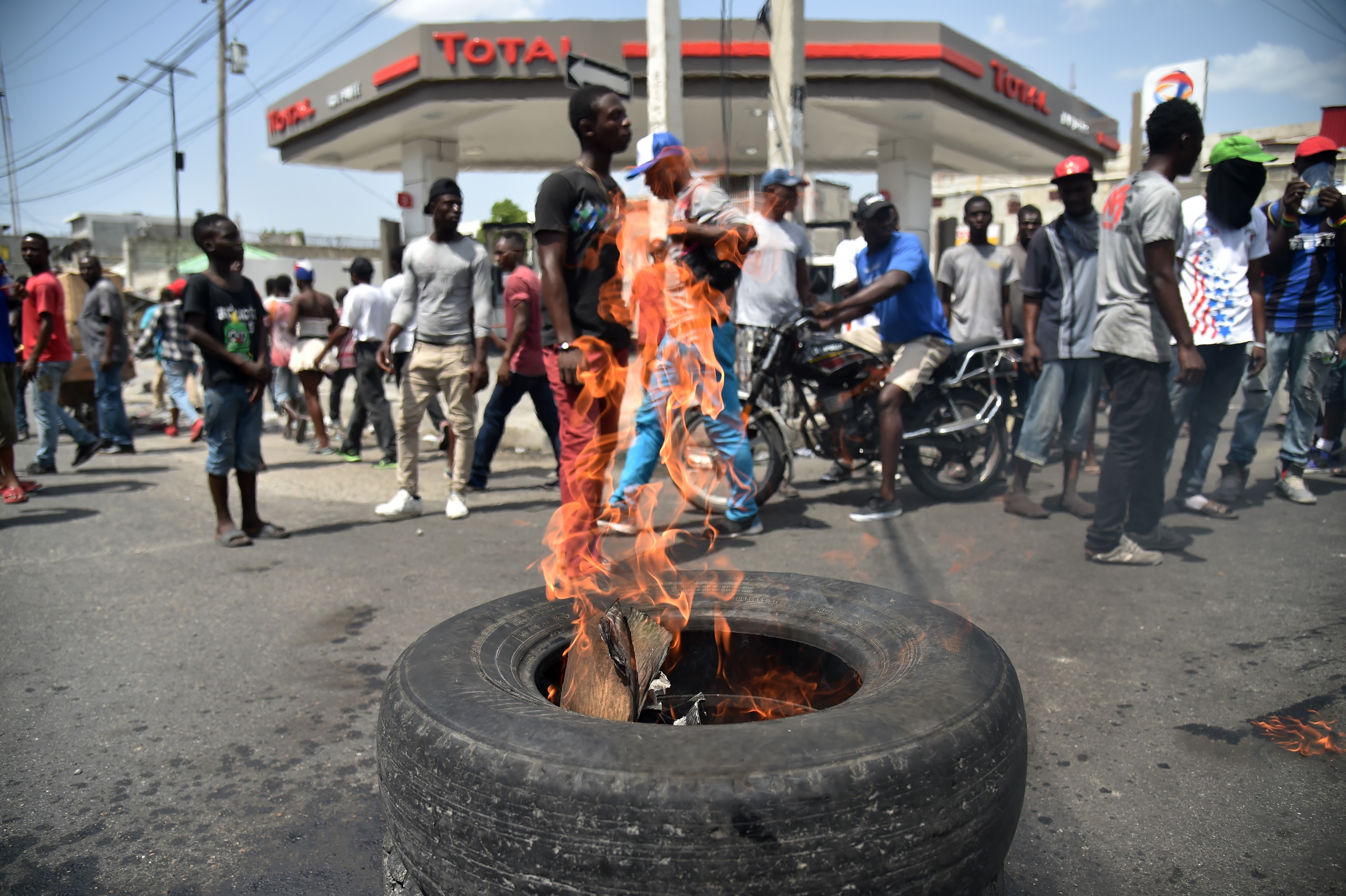 Demonstrators set fire to tires during a march through the streets of Port-au-Prince, on July 14, 2018. (Photo by Hector Retamal/AFP/Getty Images)

Haitians are devout fans of Brazilian soccer. So as fans in the country watched the World Cup’s Brazil vs. Belgium game on July 6, the Haitian government announced fuel price hikes assuming the country would be too distracted by soccer to notice. This wasn’t the case. Once Brazil lost to Belgium, people took to the streets for days of massive protests that brought the capital to a standstill. The protestors gave the president an ultimatum to step down in four days of civil unrest. After thousands took to the streets, Haitian Prime Minister Jack Guy Lafontant resigned on July 14, and the government decided to put a halt to the price hikes.

The fuel price hikes would have increased the price of gas by 38 percent to US$5 a gallon and also increased the price of the diesel used for power generators by 47 percent and kerosene used for lamps by 51 percent in a country where the minimum wage has been stagnant at US$4.39 a day as the U.S. State Department fought to keep it artificially low to benefit U.S. manufacturers.

Behind the Price Hike

The International Monetary Fund (IMF) is the architect of the price hike and insists that the Haitian government carry out reforms to stop fuel subsidies and improve tax revenue in exchange for US$96 million in grants and loans to add to the crippling US$2.6 billion debt that Haiti already faces. Two billion of that debt is owed to Venezuela for money that was embezzled by Haitian politicians and business leaders under a deal to subsidize oil.

In a speech made on July 12, 2018, an IMF official stated, “by way of background, the international community including the IMF has been working closely with the Haitian authorities to put in place economic policies, a reform program that would lay the foundation for sustainable inclusive growth for the people of Haiti.”

Haitian President Jovenel Moïse also stated that the government would focus on being more “inclusive” during a televised statement on July 14 after Guy Lafontant’s resignation. The president said he would “form an inclusive government whose mission will be to alleviate the misery of the Haitian people.”

“The IMF offered Haiti some short-term relief and the government thought it was worth the risk,” explained Robert Maguire to Latino USA. Maguire is a retired professor of International Affairs at George Washington University who’s work focused on Haiti. The protests were an indictment on the entire neoliberal economic policies imposed on post-colonial countries by the IMF, the World Bank, the InterAmerican Development Bank (IDB), and the U.S. government.

The fuel hikes were what many are calling the final straw in a cycle of debt and impoverishment that had crippled Haiti’s poor and diverted all the promises and investments of post-earthquake reconstruction to the tax-dodging Haitian elite and Haiti’s foreign debtors rather than the majority of the Haitian people. In an interview with the Miami Herald, Philip Alston, the U.N. special rapporteur on extreme poverty and human rights criticized the IMF for pushing the Haitian government into a deal that he called a “very bad dynamic and politically highly problematic.”

Moreover, eight-years after the earthquake, Haiti has little to show for the US$9 billion spent on reconstruction. Haitians institutions saw less than 1 percent of the funds raised for reconstruction while the vast majority was funneled through the piecemeal projects of foreign private contractors and international aid organizations.

Furthermore, multiple scandals involving foreign aid and U.S. intervention have made headlines over the past few years. The U.S. government pushed Haitian farmers off their lands and into sweatshops by flooding the country with heavily-subsidized American rice and taking arable land from farmers to construct more factories, exacerbating food insecurity. Multiple sex abuse scandals, many involving minors, has been evidence for many of how foreign aid workers, missionaries, and peacekeepers have preyed upon Haiti’s most vulnerable with impunity- sometimes for years. Earlier today it was announced that a missionary from Virginia who lived in Haiti would be sentenced to 23 years for sex abuse.

Also, U.N. troops charged with policing the country instead were involved in systematic sexual abuse with impunity and faced no consequences for unleashing a cholera epidemic that killed ten thousand people. A lack of coherent cross-border trade controls and contraband smuggled in and out costs the government US$400 million a year in estimated loss of trade revenue in bilateral trade with the Dominican Republic.

Since the protests began, at least three people have died. According to the local news website Alterpresse, on July 24 socio-political organizations in Haiti planned to hold a demonstration in front of Port-au-Prince’s Palais de Justice to demand the release of those arrested during the protests.

Maguire says that while there are other solutions to the issues in Haiti, there is pressure from international organizations. “Haiti’s best bet would be to do what the DR (Dominican Republic) did and get a deal with no preconditions from the Chinese,” he says, “but, there is a lot of pressure behind the scenes from the World Bank on the Haitian government and private sector to not get involved with the Chinese. Haiti is much more vulnerable to external pressure than the DR is.”

Despite the protests that took place, however, the IMF is eager to move forward with the reforms. Philip Alston said to the Miami Herald, “The one thing that is not a real option for a relatively powerless country like Haiti is to say ‘IMF go to hell.’..The IMF remains the single most powerful player in all of these negotiations.”

When Haitians took to the streets over the past few weeks it became evident that the people were willing to take a stand against the IMF.

“The government of Haiti is strapped for cash,” says Maguire. Nonetheless, he says, “The IMF is far from Haiti’s best bet.”