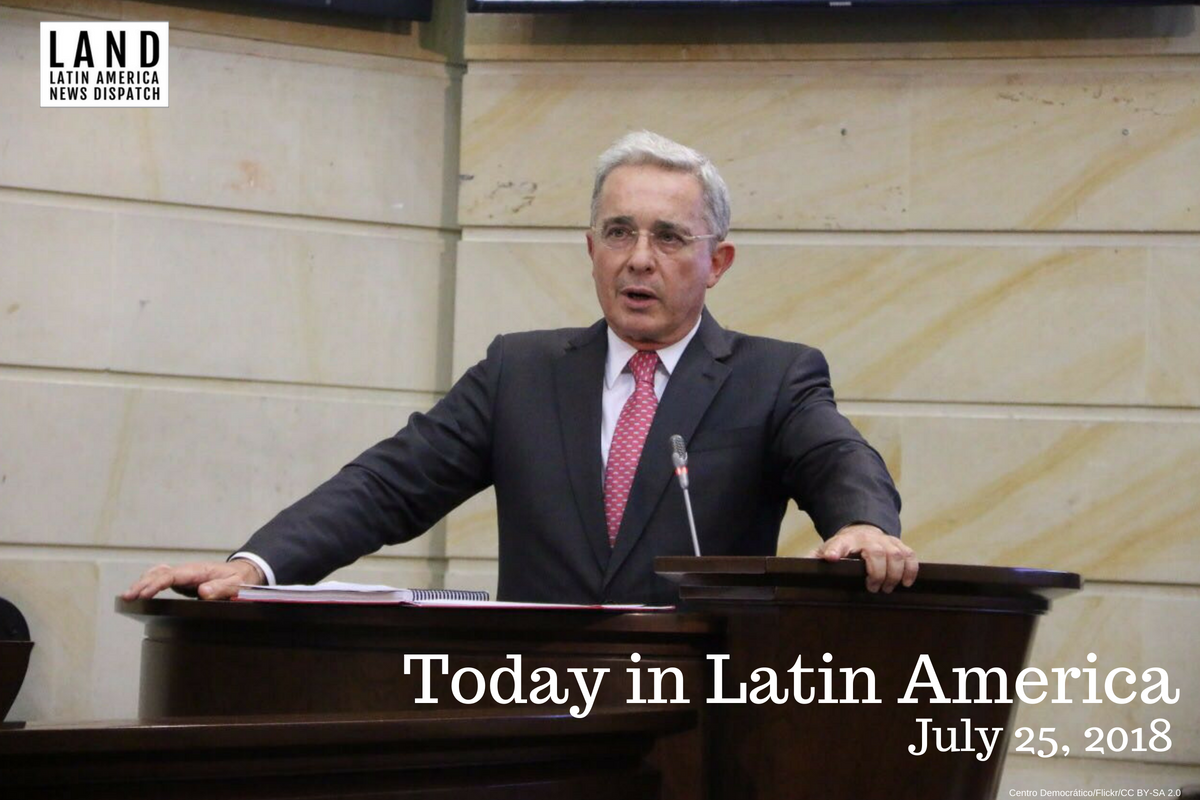 COLOMBIA: Former president and two times senator Álvaro Uribe presented his resignation yesterday, only four days after being sworn in for his second tenure, after Colombia’s Supreme Court ordered him to testify on a case against him for alleged witness tampering. Uribe tweeted that he felt “morally impeded” from continuing in his role as a senator, but another explanation for his resignation — which still needs to be accepted by Congress — is that the case against him would most likely cease to be in the competence of the Supreme Court and pass to the Office of the Attorney General. Néstor Humberto Martínez, the attorney general, is known to be close to Uribe.

For years, there have been accusations that link Uribe to right-wing paramilitary groups and drug traffic, but most of the investigations are at a standstill — he has 186 criminal complaints against him in the Accusations Committee of the House of Representatives and 28 investigations in the Supreme Court. In February, the court ordered a new investigation against him after it found that Uribe’s accusations against left-wing senator Iván Cepeda of pressuring prison inmates to falsely state that Uribe was linked to right-wing death groups were unfounded, and instead decided to investigate Uribe for coercing witnesses to say Cepeda was manipulating them. A week later the court opened a new investigation against Uribe and another lawmaker for new pressures against witnesses to retract their accusations.

On August 7, Uribe’s protégé Iván Duque is set to be sworn in as president. Duque said last night that Uribe has the right of due process and presumption of innocence and that he is “confident that his honor and innocence will prevail.”

MEXICO: The presidents of Chile, Brazil, Uruguay, Peru, Colombia and Mexico met in Puerto Vallarta, Jalisco, and signed a letter of intent to bring together the economic blocs of Mercosur and the Pacific Alliance and create a regional free trade agreement.

MEXICO: The manager of a local news site, Rubén Pat Cahuich, was shot to death in the resort town of Playa del Carmen, close to Cancún in the state of Quintana Roo. In June 2017 Pat Cahuich had been threatened by the local police over his reporting and less than a month ago another member of the weekly digital news site Playa News Aquí y Ahora, José Guadalupe Chan Dzib, was murdered.

PUERTO RICO: The chief of the Federal Emergency Management Agency, Brock Long, said yesterday that his agency’s response to Hurricane Maria in Puerto Rico was “phenomenal” and that of the four “legs” that support the response to a natural disaster—federal government, state and local government, the private sector and the citizens—three were missing in Puerto Rico. Speaking at a U.S. Chamber of Commerce Foundation event in Washington, D.C. the FEMA chief said “We’ve got to figure out how to build better baseline capabilities at all levels of government.”

HONDURAS: A judge called for a new hearing today regarding the Pandora’s Box case in which public officials allegedly funneled almost $12 million in public funds to the campaign coffers of the National Party between 2011 and 2013. Of the 38 people for whom an arrest order was issued on Saturday, 20 have been detained and 18 remain at large, including the brother in law of President Juan Orlando Hernández, who is suspected of having fled the country.

COLOMBIA: The special peace tribunal created by the 2016 peace process announced on Monday that it has opened an investigation into the army’s responsibility in the mass execution of civilians then presented as combat deaths to boost success statistics, a scandal known as the False Positives. A report by the Office of the Attorney General documents 2,250 such cases—although independent reports claim the number could be as high as 10,000—between 1998 and 2014 with a marked peak during the administrations of former president Álvaro Uribe between 2002 and 2010. This is the third case the special peace tribunal has given priority to, after the kidnappings and disappearances by the FARC and the whole context of war in the Pacific port town of Tumaco, close to the Ecuador border.

ARGENTINA: Official statistics released yesterday by authorities show Argentina’s economy contracted 5.8 percent when comparing May 2018 to the same month of the year before, raising concerns the country could fall into recession in 2018. The double-digit inflation the country has been fighting is one of the world’s highest. Even though economic activity shrank 1.4 percent in May versus April, on Monday the director of the International Monetary Fund Christine Lagarde congratulated President Mauricio Macri for the “enormous progress” Argentina has made since it received a 50,000 million loan from the IMF and began implementing austerity measures. Lagarde said the Argentine economy should improve by 2019 or 2020.

CHILE: A Roman Catholic cardinal was summoned yesterday to appear before court to answer questions about his role in an alleged cover-up of sexual abuse by Rev. Oscar Muñoz, former chancellor of Santiago. Cardinal Ricardo Ezzati, the archbishop of Santiago, is the highest church authority that has been involved by Chilean authorities in the widening sex abuse scandal.