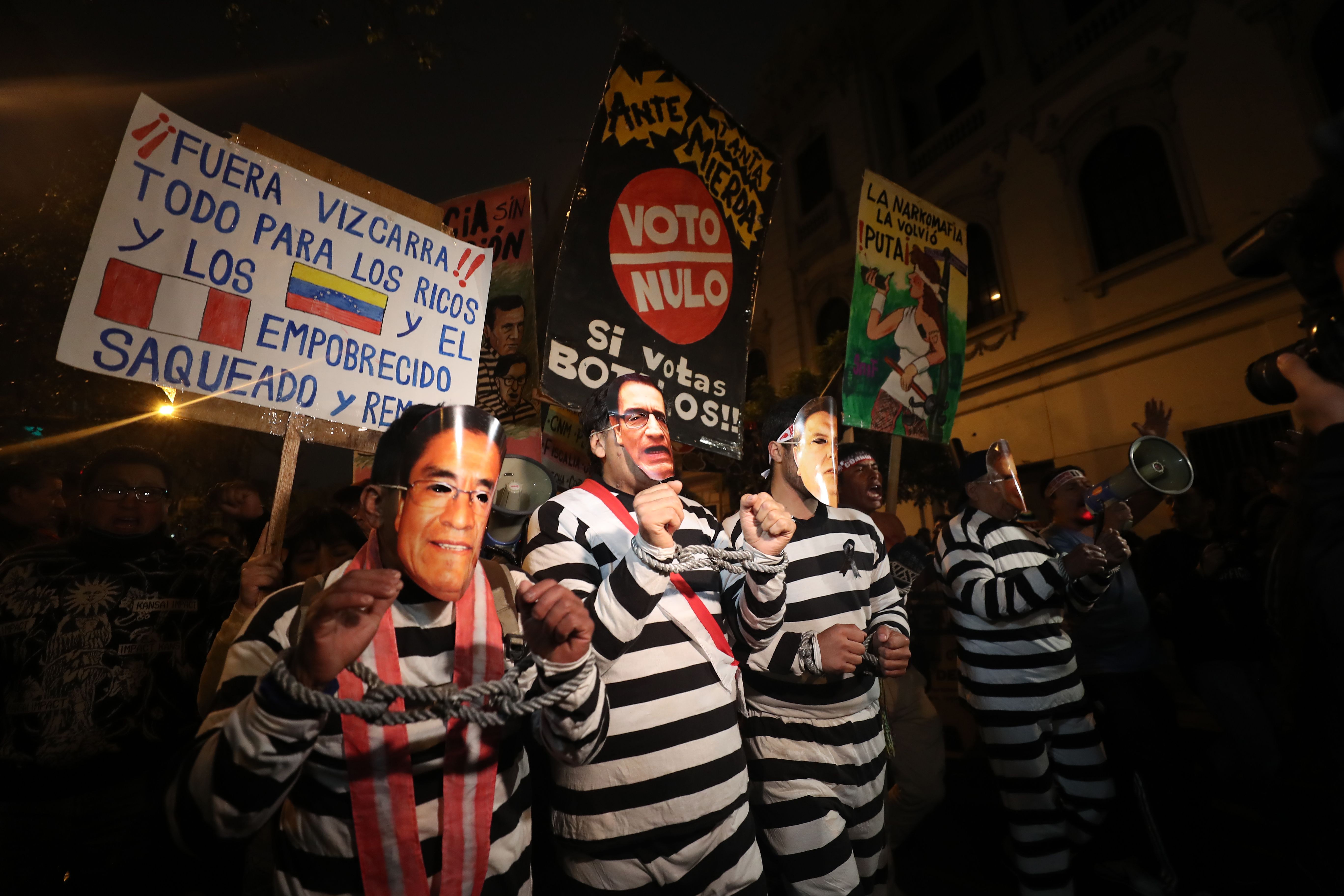 Demostrators take part in a march against corruption in Lima on July 27, 2018. (Photo by Teo Bizca/AFP/Getty Images)

Every year, Peru’s Independence Day is celebrated with  “Las Fiestas Patrias,” a multi-day event starting on or around July 28th, filled with eating, parades, and fireworks. One of the central parts of the celebration is a military parade which was held in Lima’s Plaza de Las Armas this past Sunday. But this year, instead of waving their red and white flag, some Peruvians painted their flag black and took to the streets to protest against corruption. On Friday evening, over 5,000 protesters marched, according to local sources, ending in clashes with police.

“This 28th will be of mourning, at least for me,” Fernando Nuñez, a local Peruvian, told Latino USA ahead of the weekend. “You can feel it on the streets, people are so upset.”

During the military parade, President Martín Vizcarra gave his highly-anticipated first speech as Peru’s president. Just this March, then-President Pedro Pablo Kuczynski resigned after being caught up in a vote-buying scandal, he hasn’t denied any wrongdoing and when he resigned he stated he didn’t want to be stand in the way of the country’s development.

The resignation of Kuczynski, made then-Vice President Martín Vizcarra the new head of state.

In his speech on Sunday, he called for reform by instilling a new election process for members of the judiciary.

“The judicial system has collapsed,” Vizcarra said to the nation. “It’s not a problem from today, it’s a structural problem. We will call on a referendum to begin changes with the most legitimacy possible to get the people’s trust in the judiciary back.”

Earlier this month private recorded phone calls between high-court officials in Peru were exposed by the investigative news site, IDL-Reporteros, including members of the National Magistrates Council, a chief justice of the Superior Court of Callao, and a Supreme Court justice.

The officials can be heard negotiating job positions and talking about the reducing the sentence of a rapist that violated an 11-year-old girl.

Gustavo Gorriti, director of IDL-Reporteros and the journalist that broke the story, has been called into questioning, where a judge ordered him and his colleague, Rosana Cueva, to reveal their sources and turn in the audio tapes.

In a sit-down interview with Al Jazeera Gorriti says that what’s happening now is part of something much more extended and if totally revealed, “will allow us to understand how corrupt mechanisms function and relate to organized crimes from the gangs of the streets to the highest level of Congress.” Since the tapes leaked, officials involved have either resigned or been suspended.

José Carlos Requena, an analyst with the Peruvian political consulting firm 50+1, says that while several institutions are involved in the scandal, the most damaged sector has been the National Magistrates Council (CNM), the body that appoints and evaluates judges, prosecutors, and other high-level state officials, to the point of declaring a state of emergency  just a few days ago.

“Citizen satisfaction of both the Judiciary and the Prosecutor’s Office is about 10%, according to various opinion polls, and traditionally they have great distrust,” Requena told Latino USA.

“For President Vizcarra, a golden opportunity has been presented to him to raise and lead reforms,” says Requena.

The officials heard on the tapes have either resigned or been suspended.

Though this isn’t the first time that Peru’s institutions are caught up in a corruption scandal, this time it’s different. Nestor Ikeda, a former Associated Press correspondent and video journalist living in Peru, told Latino USA that Peruvians weren’t surprised by the tapes, instead, “they were nauseated by them.”

“What happened this first half of 2018 is the most serious political and judicial scandal in the last two decades of Peruvian history,” said Ikeda. “The current moment of institutional instability due to corruption occurs not because corruption is a new component in the lives of Peruvians, but because the evidence has been made public through legally recorded conversations.”

“The patterns of corruption in Peru aren’t very different from other countries,” says Requena, “The particularity of Peru is the great institutional weakness and the little pressure on the elites for sustainable reforms.”

Three marches against corruption were called over the last few weeks, ahead of the nation’s Independence Day, the third took place on Friday.

“The first [march] had a sparse participation and was only in Lima. The second, last week, had thousands of protesters in Lima and replicated in the main cities of the country. More than in the streets, discouragement is felt in everyday conversations and in the interventions of listeners in the media,” says Requena.

The march on Friday, took place around la Plaza San Martín, one of the most central public spaces in Lima. It brought the largest crowd yet, and the most violent.

Some people attending the protest threw stones, while dozens of police officers tried to stop them with tear gas. Sidewalks were damaged. Clashes occurred between officials and protestors that were trying to get to the Congress building, several people were arrested and two reporters were injured.

Vice President Mercedes Aráoz, took to Twitter to share some photos of the parade and to say, “Today is a day to renew our commitment with Peru. Our great country is in an institutional crisis, it demands of us more work, humility and consensus.”

Nonetheless, the military parade was shorter than the norm. Peru news website RPP Noticias noted “It was a shorter celebration, but not less patriotic.”

Just blocks away from the military parade, neighbors placed black and white flags outside of their houses.

For Nuñez, boycotting the celebrations was about sending an important message. “The country is on pause, total stop”, he said, “We need to let people know how upset we are.”