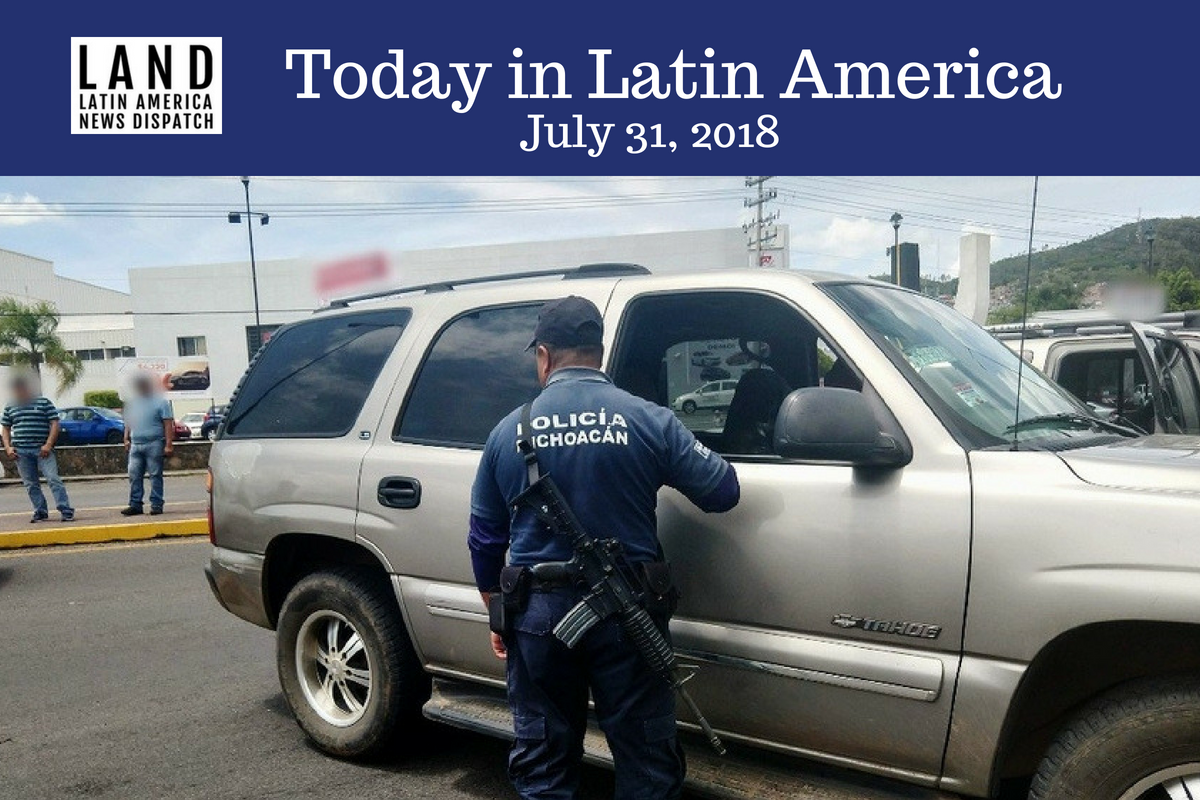 MEXICO: A new report by the country’s National Statistics Institute says that there were 31,174 murders in 2017. This is higher by 2,000 than what was previously reported by the Interior Ministry, but the new numbers are more thorough because they come directly from morgues and public registries, while the Interior Ministry doesn’t count deaths but homicide investigations, and some of them involve multiple victims.

The new data breaks the record for the highest number of murders since comparable records began being kept in 1997, including the peak year of Mexico’s drug war in 2011. According to the new statistics, the homicide rate for 2017 was of 25 murders per 100,000 inhabitants, just under the levels of Brazil and Colombia at 27 per 100,000. But violence in Mexico is concentrated in certain areas: the state with the highest rate is Colima, west of Mexico City on the Pacific coast, where murders rose 38 percent last year and reached a staggering 113 per 100,000.

Mexico City reported 600 murders in the first six months of 2018, 66 percent more than in the same period in 2014. Authorities blamed the rise on a confrontation between two drug cartels (the Tepito Union and the Anti-Union Force) fighting for control over the city center.

PUERTO RICO:  The U.S. territory reached a deal Monday night to restructure more than a third of its bankrupt power company’s debt. More than $3 billion in debt will be exchanged for two bonds—the first would be exchanged at 67.5 cents on the dollar, and the other one at 10 cents on the dollar. Both bonds would be linked to Puerto Rico’s economic recovery. This would the first time Puerto Rico will not pay a revenue bond in full. The federal control board appointed to oversee Puerto Rico’s finances promised the deal would not increase rates but only if there is a drop in power usage.

NICARAGUA: President Daniel Ortega continued this week giving out interviews to international media. In an interview with CNN, he said that he is willing to restart talks with the opposition with the mediation of the United Nations and that he is open to calling for early elections if Nicaraguans want to. “We could ask people,” he said, “if people say yes, we can go forward with early elections.” In an interview with Euronews channel, Ortega said he would not call for early elections and blamed the United States for the crisis in Nicaragua, saying funds directed at NGOs are rerouted and used for “provoking violence, stimulating armed groups and terrorist actions.” During this interview, Ortega recognized the existence of a “voluntary police that on special occasions wear masks.” Human rights organizations blame most of the violence on these masked paramilitary groups.

COLOMBIA: Yesterday afternoon, armed men on motorcycles entered a pool hall in the town of El Tarra, a turbulent region known as the Catatumbo jungle in the province of Norte de Santander, and opened fire, killing nine people. Although the murder took place in broad daylight in a highly militarized region along the border with Venezuela, authorities haven’t been able to determine what happened and didn’t even confirm the number of deaths until early Tuesday morning. The dead include two former civilian supporters of the demobilized FARC and a local peasant leader. The two major armed groups in the region, the ELN and the EPL, denied their involvement in the murders.

ARGENTINA: Watchdog group Transparency International said yesterday it found the alleged campaign financing fraud by the party of President Mauricio Macri worrisome. The scandal broke out in June with accusations that Macri’s party Cambiemos had stolen the identities of at least 1,100 people to register them as contributors for the primary and  presidential elections of 2015 and the legislative elections of 2017.