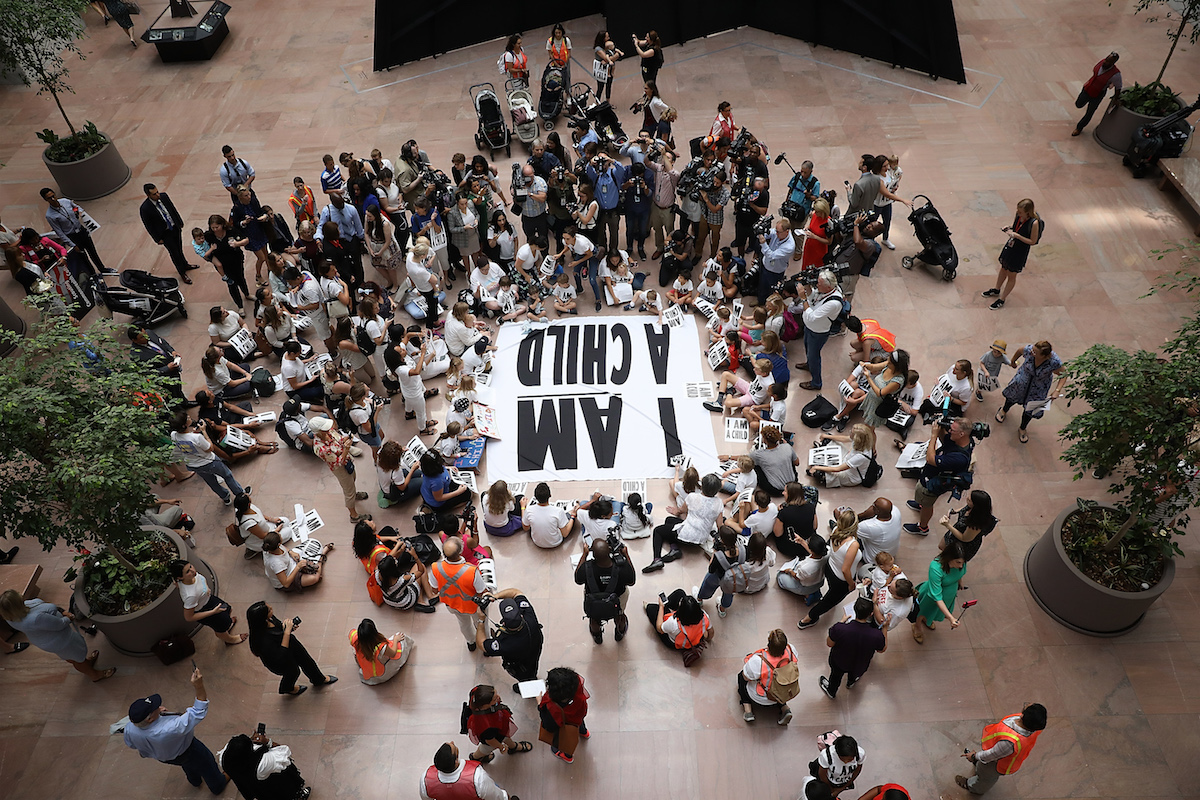 Protesters and their children participate in a sit-in in the Hart Senate Office Building to mark the court-ordered deadline for the Trump Administration to reunify thousands of families separated at the border July 26, 2018 in Washington, DC. (Photo by Win McNamee/Getty Images)

Public outrage over the Trump administration’s detention of children, including babies, brought across the border when their families arrived seeking asylum is still simmering, as the number of lawsuits over this practice grows.

Although federal detention is a government policy, the federal government does not directly run most of the facilities where families are detained or kids end up on their own. Instead, it hands nonprofit groups, for-profit businesses and local governments $1 billion a year or more to house nearly 12,000 children. This money is dispensed through government contracts that do not always gain much public attention.

But now, amid protests and other forms of public pressure, some contractors are severing their ties to the Immigration and Customs Enforcement agency. This is a new development as oversight by government officials and watchdog groups has historically centered largely on costs, fraud or whether contractors broke laws—not whether there was something inherently wrong with the contracts themselves.

Having studied the politics of accountability for many years, I would argue that the responsibility for these unpopular immigration policies largely lies with the federal government, not its contractors.

Government contracting is hardly unique to immigration detention. The businesses and nonprofits contracting now employ many more people than the federal government itself, according to political scientist Paul C. Light. For example, some contractors operate private prisons, and there are nonprofits with government grants that help settle immigrants and refugees.

Once they sign a contract, these organizations and companies are legally obligated to deliver the goods and services they have agreed to provide. When they break law or behave irresponsibly, or when audits, investigations, lawsuits or advocates reveal that contractors have failed to meet their obligations, they may have to pay fines or face other consequences like being barred from getting future contracts but not always.

A bevy of government agencies, Congress, consultants and advocacy groups all try to ensure contractors follow the law.

Proper oversight, however, is hard to do. Monitoring takes time. Contractors may know more about the work than government officials do. Officials rely on contractors to get work done and that dependence can interfere with oversight.

Immigration detention illustrates why the government relies on contractors who can act quickly. The contractors detaining children and parents apart from one another had little time to prepare before the separation policy officially went into effect.

Likewise, the contractors that will detain families indefinitely, if the Trump administration gets its way, had no time to get ready before a judge ordered the government to stop separating undocumented asylum-seeking families.

Naturally, entities that already have contracts tend to get new ones when the federal government wants new work done. But now, following years of troubling situations that got far less attention, public anger over the detention of asylum-seeking families is apparently upsetting some of these relationships.

For example, the Springfield, Oregon, city council voted to end an ICE contract to hold undocumented immigrants in the local jail. At least three local law enforcement agencies in California have severed similar contracts along with a suburb of Austin, Texas.

Consulting giant McKinsey & Company has also backed out of an ICE contract rather than doing work “at odds with our values.”

And big corporations like Microsoft, Google and Salesforce are under pressure from their own employees and activists to sever their ties to ICE and Customs and the Border Protection agency.

The bulk of the ICE contracts for child immigrant detention, meanwhile, remain in place.

And ensuring that contractors follow the law and do what they contracted to do can be hard. Experienced contractors know whom to talk to, what the federal government requires and how to muster services and supplies.

Contractors also have expertise and capacity when a government needs more of either, making it hard for the authorities to exert pressure on them. What’s more, contracting tends works best with stable relationships.

Ongoing relationships, the need for capacity and contracting expertise can mean there is little competition, if any, when the government seeks contractors for, say, detaining more immigrants than ever.

And it should be no surprise that contracting through several layers of government can make it hard to tell who is responsible for what while the requirement to distribute budgeted money quickly can distort spending priorities.

In many cases, the government relies on private consulting firms to assess how well these contracted-out government programs are running. But these consultants themselves need to be monitored.

Finally, monitoring can stick with what is easiest to measure, such as the numbers of detainee beds occupied in a given week. Those numbers may not matter as much as whether the policies requiring the beds and meals are just.

The people most likely to realize when things go wrong are the detained immigrants themselves. Like prisoners, they have no easy way to complain when they believe they are being abused.

The media can cast a light into this void, either when journalists publicize abusive conditions or when evidence of the abuses go viral.

And lawyers can sue when detention centers and other contractors allegedly engage in illegal practices. For example, the Shenandoah Valley Juvenile Detention Center in Staunton, Virginia, is being sued and investigated by state authorities for allegedly abusing unaccompanied immigrant teens it held through a federal contract.

Other media reports have cited children going hungry or being held for multiple days in sites lacking beds, kitchens or anywhere to bathe except a sink—sparking investigations by local authorities for violating child care regulations.

Lawsuits can force the government to change its policies, as has now happened with the apparent end to the family separation policy. But lawsuits do not always achieve the results intended. Since legal proceedings usually take years to adjudicate, they are often settled before running their course—well out of public view.