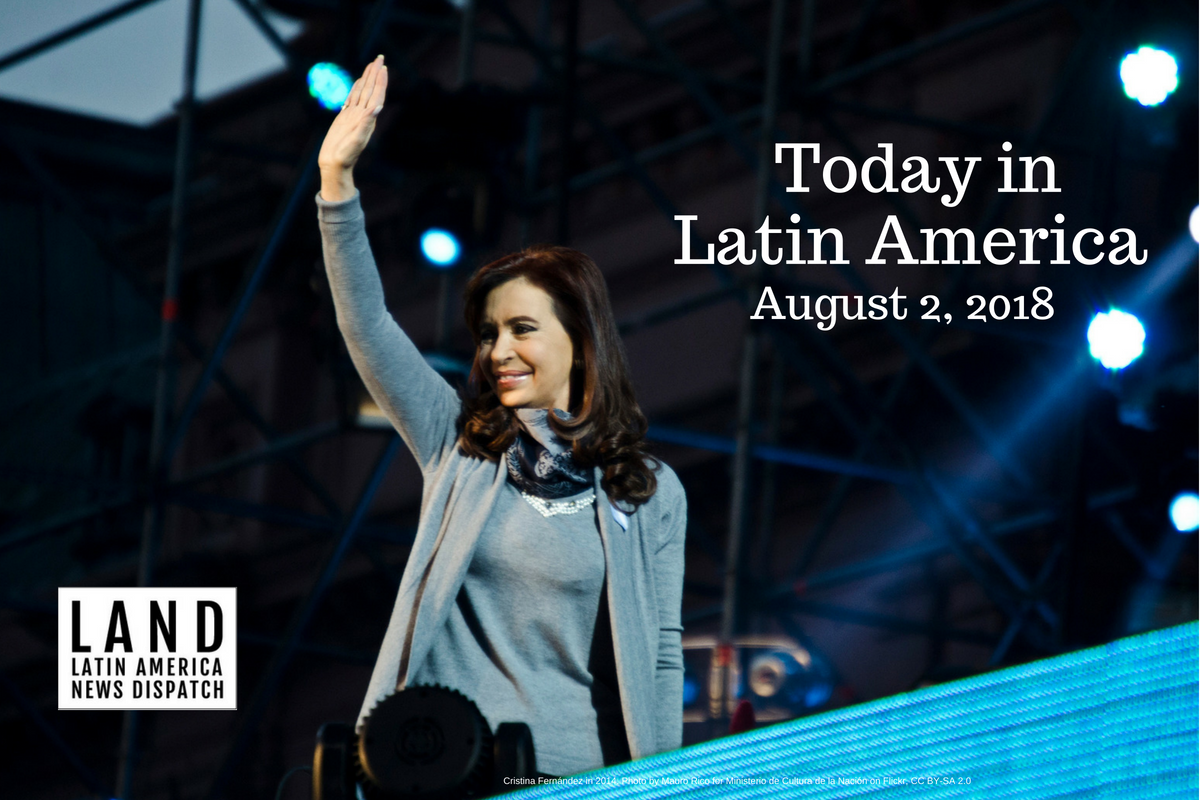 ARGENTINA: A federal judge ordered former President Cristina Fernández to testify in an investigation into alleged corruption involving public works contracts. Judge Claudio Bonadio also ordered the arrest of at 12 business leaders and former officials who served in the left-wing administrations of Fernández (2007-2015) and her now deceased husband Néstor Kirchner (2003-2007). Fernández, who was called to testify on August 13, is currently a senator, which grants her immunity from prosecution. She is also facing separate accusations of alleged money laundering, illegal enrichment and state fraud but has previously denied any wrongdoing.

Bonadio had already accused Fernández of other crimes, including high treason for allegedly signing a treaty with Iran to cover up the role of Iranian citizens in a 1994 bomb attack on a Jewish center in Argentina that killed 85 people. In December 2017, Bonadio asked Argentine lawmakers to remove Fernández’s immunity to allow her arrest but Congress hasn’t discussed the petition, pushing it several times into the future. It should be discussed in November, according to the latest decision. The allegations against Fernández were initially made by prosecutor Alberto Nisman, but he was found dead in strange circumstances that were finally ruled a suicide on the day he was to brief Congress. Former Interpol chief Ronald Noble has said that he wants to testify on behalf of Fernández to say she did not ask to have the arrest warrants lifted as Bonadio, and Nisman before him, argue.

MEXICO: A shootout between rival fuel thieving gangs left five dead on a highway in the northern Mexico state of Chihuahua. The dead include a police officer who was responding to reports of a shooting. No arrests have been made. An average of about 60 illegal taps are drilled every day into government-owned pipelines in Mexico.

PUERTO RICO: The Federal Emergency Management Agency awarded an additional $93 million in public assistance grants for Hurricane Maria recovery. Most of the money, $80 million, will go to the Department of Education and $10.4 million will be awarded to the Puerto Rico Electric Power Authority for “protective measures related to the Guajataca Dam.” The remaining $2.5 million will go to the municipality of Morovis in central Puerto Rico to use for the removal of debris from the hurricane.

NICARAGUA: The government of President Daniel Ortega strongly rejected on Monday a proposal to establish a special commission in the Permanent Council of the Organization of American States to investigate the ongoing political crisis in Nicaragua. The proposal was put forward by Argentina, Brazil, Canada, Chile, Colombia, the United States, Mexico and Peru. It was rejected by Nicaragua because it would be an interference in “internal affairs that only concern the State of Nicaragua” and a “political and interventionist move.”

COLOMBIA: The outgoing administration of President Juan Manuel Santos concluded its sixth and final round of talks with the ELN rebel group in Havana, without reaching an announced temporary cease-fire agreement. Incoming president Iván Duque said he will only continue the peace process with the ELN if the guerrilla group agrees beforehand to a complete cease of all “criminal activities” and to “concentrate [its members] under international supervision.”

BRAZIL: For the first time since 2002, the Brazilian Communist Party has decided to run its own candidate for October’s presidential elections and not support the Worker’s Party of former president Luiz Inácio Lula da Silva  Manuela d’Ávila, a 36-year-old former journalist and former federal deputy for the Rio Grande do Sul state, was elected yesterday as the party’s presidential candidate.

BRAZIL: Far-right presidential candidate Jair Bolsonaro said during an interview on Monday that Brazil should not feel guilty about its past as the world’s biggest slave importer because black people “themselves handed over the slaves.” Bolsonaro also  promised that if elected, he will roll back policies introduced by former President Dilma Rousseff designed to tackle racial inequality.