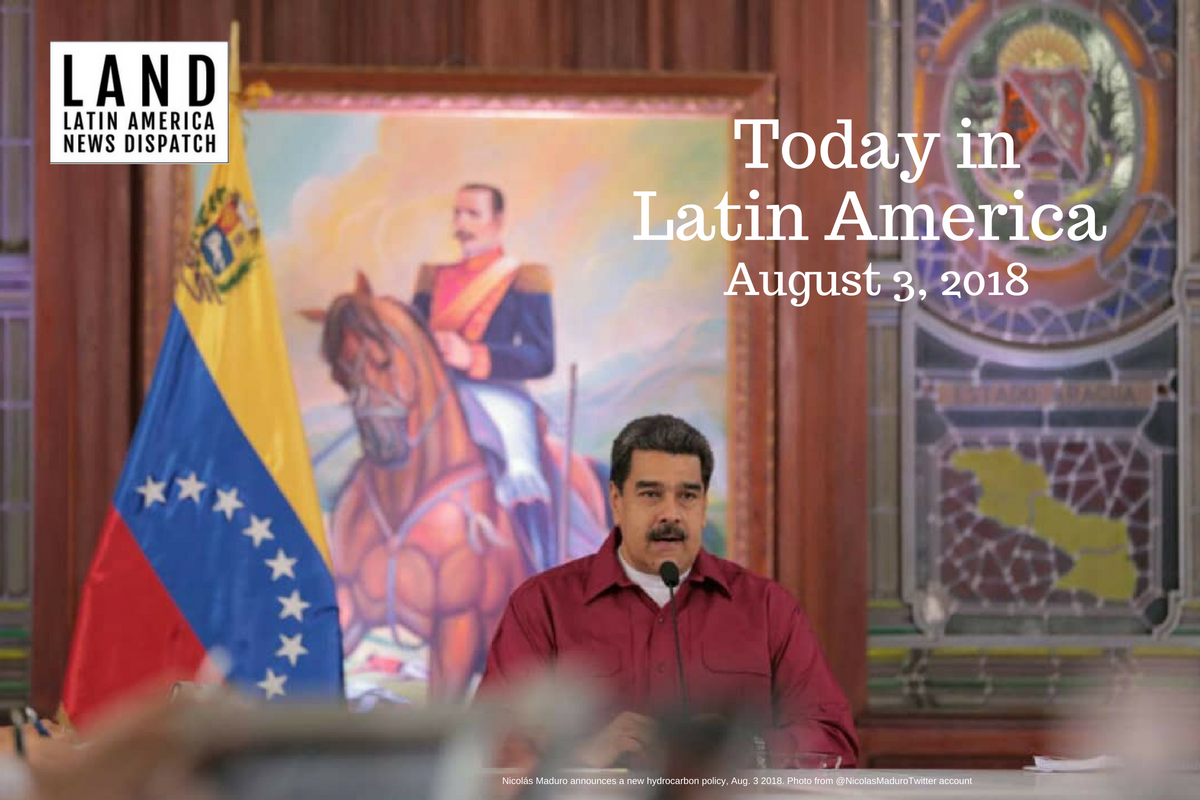 VENEZUELA: The ruling party’s National Constituent Assembly voted yesterday to relax strict currency exchange controls as part of President Nicolás Maduro’s plan to combat the foreign exchange black market. The unanimously approved bill will decriminalize the holding and sale of foreign currency allowing exchange offices to be reopened, but the government will continue to control the exchange rate with two different rates, as it did between 2003 and 2006. The measure is expected to be a relief for the industry, trade and service sectors of the economy.

Maduro also promised to roll out a new hydrocarbon policy, which he said will mean “we’ll have enough money, cash, in this country to invest in everything our people need.” Gasoline in Venezuela is the cheapest in the world because of state subsidies. The smallest coin that will be available in the market after the government issues new currency with five less zeroes will be enough to fill 100 SUV tanks. The Venezuelan president announced a nationwide census of vehicles that will begin today to limit gasoline sales to smugglers, whom he blames for shortages, as only those who participate in the three-day census will be eligible for receiving the subsidized gasoline.

MEXICO: On Tuesday the United Nations Human Rights Committee recognized journalist Lydia Cacho’s rights were violated and ordered reparations by the Mexican state. Cacho was abducted for 20 hours in 2005 during which she was sexually harassed and psychologically tortured after publishing a book on an investigation that linkedQuintana Roo politicians, police and business leaders to a child pornography and prostitution network. The police then accused Cacho of defaming a textile businessman from Puebla who was linked in her book to child sex trafficking. After a year, she was absolved of all charges. The U.N. committee also ordered Mexico to prosecute her abusers and to change the libel and slander laws that currently allow politicians and other powerful people to use them against journalists.

PUERTO RICO: A judge imposed yesterday a $3 million fine on a development company in Puerto Rico for discharging more than 29 million gallons of raw sewage into a storm water system in 2012 and 2013 . The raw sewage from a residential development in the northern town of Toa Alta eventually made its way into a river that serves some 80,000 people in the U.S. territory. The judge also ordered the Mora Development Corporation to make restitution to a family whose children were affected by the pollution.

GUATEMALA: A judge ordered former president Otto Pérez Molina be again held in pre-trial detention after the National Forensic Sciences Institute declared his health issues do not warrant hospitalization. Pérez Molina has been hospitalized for more than three months in Guatemala City’s Military Medical Center for a heart condition that the director of the forensic institute said had already been treated while Pérez Molina was still in office. The former president is accused of involvement in several corruption cases, including systematic customs fraud. Pérez Molina’s vice-president, Roxana Baldetti, is accused of involvement in the same corruption scandals and has also presented several appeals on account of her health, getting the forensic institute to examine her medical condition no less than 55 times.

COLOMBIA: The National Center for Historic Memory published yesterday the most comprehensive report on the internal conflict up to date. It found that 262,000 people have been killed between 1958 and July 2018 and that 82 percent of those were unarmed civilians. The biggest culprits of civilian deaths are right-wing paramilitary groups that murdered 95,000 people, followed by left-wing guerrillas that killed 36,000, although the report says 65,000 deaths couldn’t be clearly attributed.

BRAZIL: The Health Ministry reported that more than 1,053 people have been infected with measles and five have died in an outbreak in the northern jungle states that has been linked to neighboring Venezuela. Only 31 cases have been registered outside of the states of Amazonas and Roraima. In Venezuela, health services have collapsed amid political and economic turmoil, and outbreaks of infectious diseases have been reported, although an announcement that polio had returned after 29 years was retracted by the World Health Organization.

ARGENTINA: The Senate approved on Wednesday the definite text of the bill to legalize abortion that will be put to a vote next week. A bill was approved by the lower house on June 14. There had been proposals to shorten the timeframe within which it legalized abortion and to allow hospitals, and not only practitioners, to invoke conscientious objection but the final decision was to vote on the bill as it passed the House of Representatives. The vote on August 8 is expected to be a tight one.