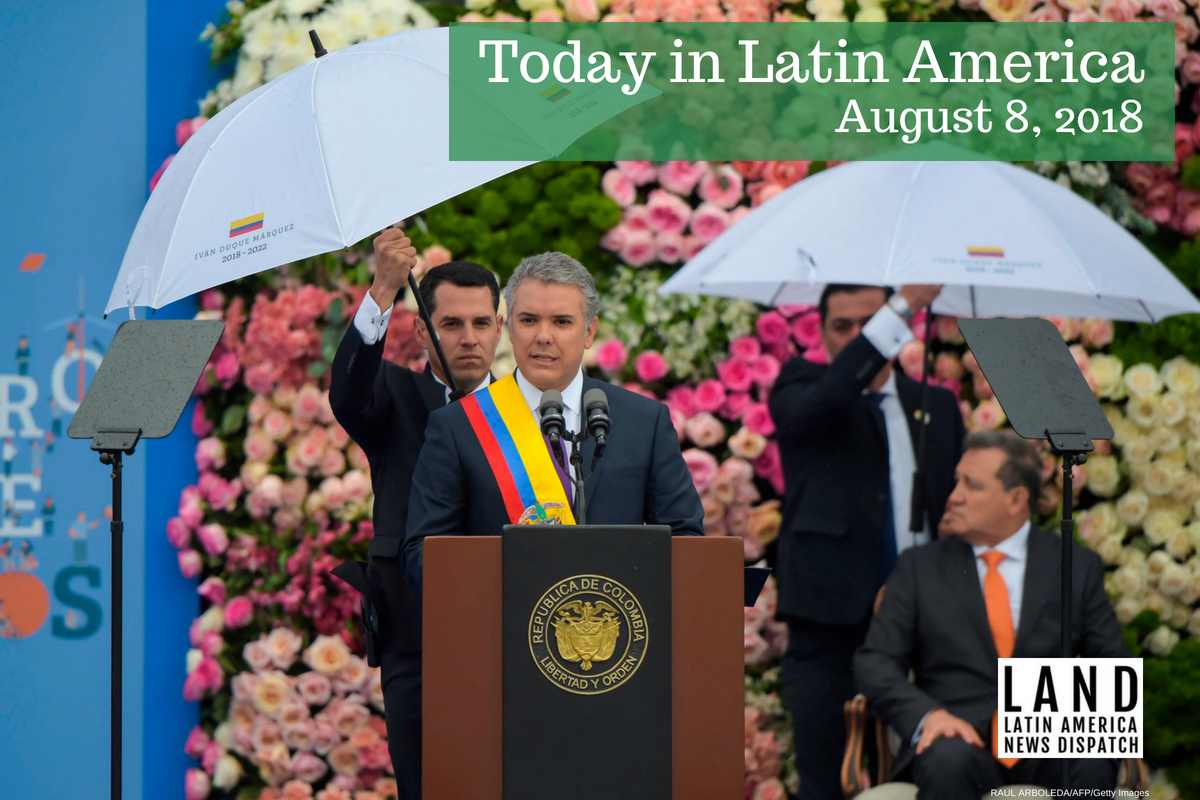 COLOMBIA: Newly-elected President Iván Duque took office yesterday with a ceremony at Bogotá’s central Plaza de Bolívar. Duque, who defines himself as a centrist liberal, pledged to unite the country after a divisive election campaign where he ran as the so-called protégé of far-right-wing former president Álvaro Uribe. Duque promised during his speech to “make corrections” to the 2016 peace deal with the FARC leftist rebels. Meanwhile, his Democratic Center party published whole page ads in several of the country’s largest newspapers lambasting the legacy of Juan Manuel Santos’ presidency. And Ernesto Macías, the president of the Senate who also belongs to the Democratic Center party, gave a speech berating Santos and praising Uribe.

During the day, thousands gathered at public squares around the country to call for the preservation of the peace deal and the protection of community leaders that have been murdered and threatened since. About 5,000 people gathered in the Plaza de la Hoja square in Bogotá at the call of losing left-wing candidate and now senator, Gustavo Petro.

In the morning before the ceremony, three explosions went off in the south-east province of Cauca killing one police officer and injuring four more. Authorities believe the attacks can be attributed to dissident former members of the FARC.

UNITED STATES-MEXICO: A U.S. federal appeals court ruled yesterday that the family of José Antonio Elena Rodríguez, a Mexican teenager who was killed by a U.S. agent who shot at him ten times through a border fence in 2012, can legally sue the agent and U.S. government for damages. The Border Patrol agent Lonnie Swartz was acquitted in April of second-degree murder but is facing a retrial on lesser charges of voluntary and involuntary manslaughter. The federal judges said that Swartz violated the fourth amendment of the U.S. Constitution that prohibits law enforcement from using “objectively unreasonable” force to seize a person and that there was a “compelling interest” in regulating the conduct of government agents even though the death happened in Mexico.

PUERTO RICO: Gov. Ricardo Rosselló’s legal challenge to the authority of the financial oversight board was rejected yesterday by a U.S. federal judge. Judge Laura Taylor Swain rejected Roselló’s arguments on procedural grounds and said the board and Puerto Rico share an “an awkward power-sharing arrangement,” but that the board does have the authority to make binding policy choices on the territory. Rosselló, who is in favor of statehood,  criticized the decision as “further proof of Puerto Rico’s colonial status.”

EL SALVADOR: Former President Tony Saca agreed to plead guilty to charges of embezzling more than $300 million in government funds during his 2004-2099 tenure in return for a lighter sentence, his lawyers said yesterday. Saca was arrested in October 2016 and faced up to 30 years in prison if convicted but under the deal prosecutors will ask for only 10 years for embezzlement and money laundering.

VENEZUELA: President Nicolás Maduro accused during a speech yesterday two opposition legislators of having been involved in Saturday’s drone attack . An opposition party said that lawmaker Juan Requesens and his sister, student leader Rafaela Requesens, were arrested in their Caracas apartment last night. A video widely circulating on social media shows the arrest but Maduro didn’t mention it and the Information Ministry did not respond to a request by news agency Reuters for comment. Requesens’ sister was later released. The other lawmaker Maduro said was involved in the attack was Julio Borges a lawmaker who is living in exile in Colombia. Diosdado Cabello, the head of the National Constitutional Assembly said on Twitter he would introduce a bill to strip the lawmakers of their immunity from prosecution.

PERU: Ten people have died and 21 remain in serious condition after eating contaminated food at a wake on Monday in the small town of San José de Ushua in the south-central Andes region of Ayacucho. The health minister said the food offered at the wake of a local man, which was attended by about 50 people, apparently came into contact with insecticide. Among the fatalities are the dead man’s two eldest sons.

ARGENTINA: A court sentenced former vice president Amado Boudou yesterday to five years and 10 months in prison for bribery and conducting business incompatible with public office. Boudou was vice president and economy minister during the 2007-2015 administrations of former president Cristina Fernández, who is also facing corruption charges but is currently a senator which grants her immunity from prosecution. Boudou claims he is innocent and called the conviction a case of political revenge.

CHILE: Congress passed a bill banning the widespread commercial use of plastic bags. Larger businesses will have six months to fully stop using plastic bags while small shops will have two years to adapt to the total ban and will be allowed to hand out two bags per customer in the meantime. Chile is the first South American country to legally ban plastic bags.