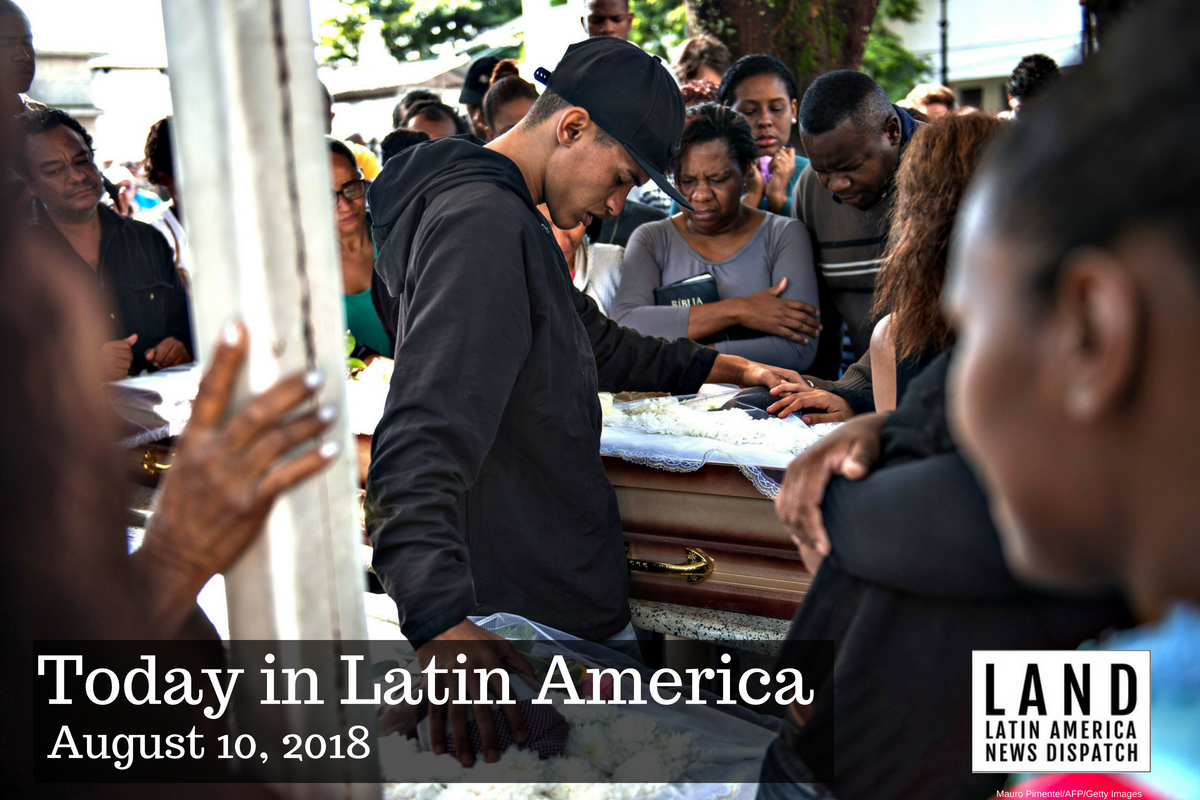 BRAZIL: New data shows that in 2017 Brazil broke its own record for homicides with a 3.7 percent increase in the number of killings when compared to 2016. The murder rate for 2017 was of 30.8 per 100,000 people, up from a rate of 29.9 in 2016, according to the Brazilian Public Security Yearbook 2018, a yearly publication by the independent Brazilian Public Security Forum. The data published, which in the absence of comprehensive federal crime data is used by the federal government, also showed that an average of 14 people died at the hands of police officers every day, an increase of 20 percent from the previous year. Most victims were young, black men from poor urban areas, said the director of the forum Renato Sérgio de Lima.

Gender-based violence also increased with rapes rising eight percent and a 6.1 percent increase in the number of murders of women, a steeper rise than that of the general population. Only last week, a video published by a popular television show horrified the country reigniting the conversation on femicides. A residential building’s security cameras show Luís Felipe Manvailer viciously attacking his wife, lawyer Tatiane Spitzner, in the garage and elevator. Twenty minutes later he takes the elevator again by himself after she has fallen to her death from their fifth-floor apartment. He has been charged with her murder.

UNITED STATES: A federal judge ordered the government to return an asylum-seeking mother and her daughter who were being deported to El Salvador yesterday. U.S. District Judge Emmet G. Sullivan of Washington threatened to hold Attorney General Jeff Sessions, Homeland Security Secretary Kirstjen Nielsen and other senior Homeland Security officials in contempt of court when he learned that one of the plaintiffs in the case he was hearing was already on a plane being deported with her daughter. The mother and daughter did not disembark in the Central American country and were brought back immediately. The women are part of a suit filed by the American Civil Liberties Union and the Center for Gender & Refugee Studies on Tuesday against Sessions’ June 11 decision to prevent people fleeing from domestic and gang violence from qualifying for asylum.

MEXICO: Authorities announced yesterday that the suspected head of the most powerful gang of Mexico City was arrested on Wednesday. National Security Commissioner Renato Sales said at a news conference that 37-year-old “El Betito,” the suspected head of the Tepito Union gang and whom local media identified as Roberto Moyado Esparza, had used hair implants and lost more than 66 pounds through gastric bypass surgery to avoid being recognized by authorities and rival gangs but was identified on the street by anti-drug agents.

PUERTO RICO: The territory’s government acknowledged for the first time in a report to Congress that Hurricane Maria killed more than 1,400 people. After the quiet recognition was made public by the New York Times, an island official said that the confirmed toll remains frozen at 64 pending a scientific review due out soon and that the figure of 1,427 used in the report to Congress, which details a $139 billion reconstruction plan, “is simple math” based on the number of excess deaths from September to December 2017 compared to the average for the same time period over the previous four years. The administration of Gov. Ricardo Rosselló commissioned an independent epidemiological study by George Washington University and the Milken Institute of Public Health that is due in coming weeks.

COSTA RICA: The Supreme Court ruled on Wednesday night that a ban on same-sex marriage is unconstitutional and discriminatory and gave lawmakers 18 months to change the current law. The ruling complies with a judgement issued in January by the Inter-American Human Rights Court that said same-sex marriage should be recognized by all of its signatory members. Same-sex marriage was a key issue in April’s presidential elections when Carlos Alvarado, a supporter of LGBT rights, won the presidency. Justice Fernando Castillo told a press conference that the ban on same-sex marriage will automatically cease to legally exist if the evangelical-led Congress does not make the necessary changes to the law.

VENEZUELA: In the wake of last weekend’s attack against President Nicolás Maduro, opposition lawmakers Julio Borges and Juan Requesens were stripped of their immunity from prosecution by the National Constituent Assembly on Wednesday. The Supreme Court ordered the arrest of Borges, who lives in Colombia, and Requesens was arrested a day before. Attorney General Tarek William Saab and Foreign Minister Jorge Arreaza met on Wednesday with the U.S. Chargé d’Affaires James Story, the top U.S. diplomat in Venezuela where there has been no ambassador since 2010, to present evidence linking Osman Delgado, a Venezuelan living in the U.S., with the attack.

Meanwhile, Salvatore Lucchese, a former municipal police chief turned anti-government activist, told Reuters in an interview while traveling to Colombia that he helped organize the drone attack against Maduro. Lucchese said an informal group of militants known loosely as the “resistance” was behind the attack and declined to say whether he was associated with the Soldiers in T-Shirts group that had already claimed responsibility.

ECUADOR: Authorities declared a state of emergency in three provinces along the northern border with Colombia on Wednesday in an effort to cope with the masses of Venezuelans arriving each day. A spokesman for Ecuador’s Ministry of Foreign Affairs said up to 4,000 Venezuelans are seeking entry into Ecuador every day.

CHILE: The office of the Roman Catholic bishop to the armed forces was raided yesterday as part of investigations into accusations that sexual abuse by clergymen was covered up by church officials. Under Chilean law on the separation of Church and state, bishops are not obligated to report crimes committed inside the Church to the civilian authorities but Arias said that military clergy, who hold military rank, “have an obligation to report crimes because they are members of the armed forces,” he told Reuters.