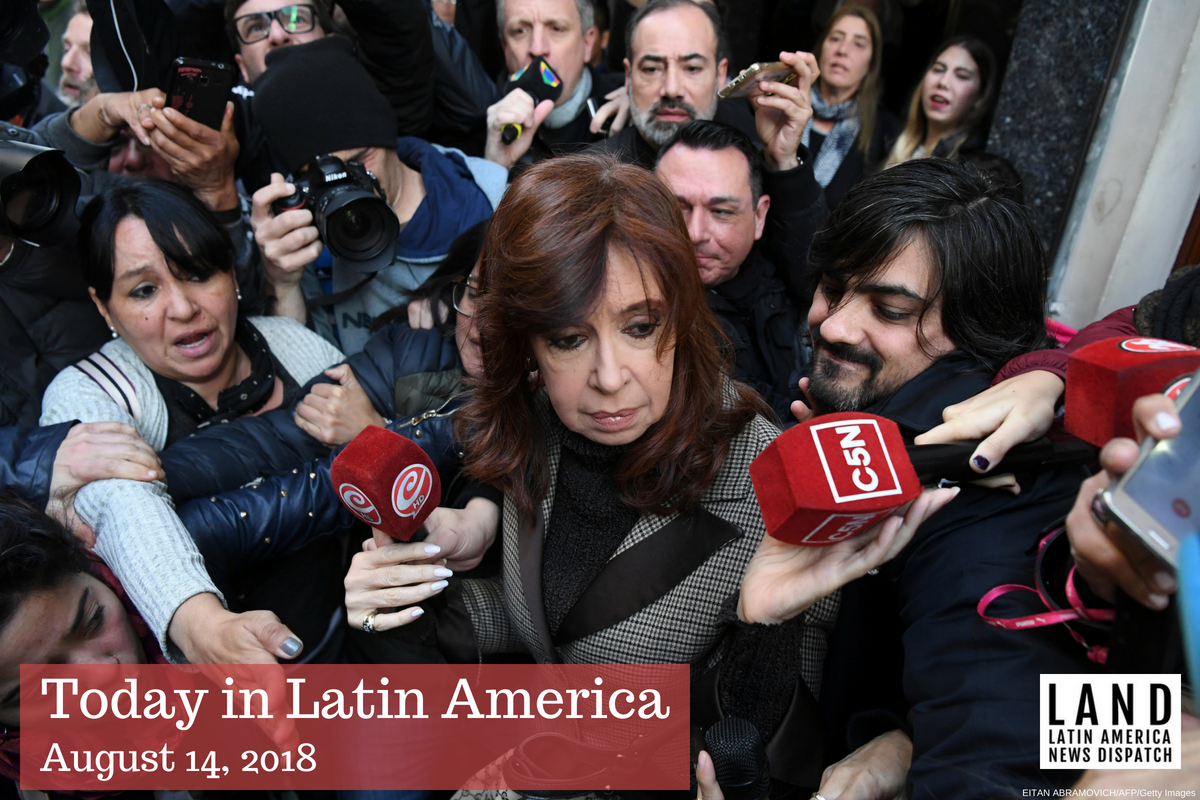 ARGENTINA: Former president Cristina Fernández appeared before a court in Buenos Aires yesterday but declined to speak and instead presented a written statement denying any wrongdoing in the corruption scheme involving public works contracts of which she is accused. In the statement, she says that Federal Judge Claudio Bonadio is a politically motivated “enemy judge” who has set up five of the six cases against her since leaving office. This case is based on an investigation by the newspaper La Nación stemming from the notebooks of detailed information that the driver of a high-ranking official allegedly kept of his deliveries of millions in bags of cash from businessmen to public officials during the governments of Fernández and her late husband Néstor Kirchner. Ten people have already taken plea bargains.

Unlike other times she has appeared in court when she has organized political rallies outside the courtroom, Fernández asked her followers not to accompany her to yesterday’s hearing. The scandal could diminish her chances if she runs for the presidency again in next year’s elections and has given President Mauricio Macri a rest from criticism for the country’s economic woes, strengthening his chance for reelection. Research firm Elypsis found that Fernández’s positive image has fallen 10 percentage points to 31 percent since the probe began, while Macri’s rose up to 33 percent. But the scandal has also hit financial markets, Argentina’s already weak peso depreciated sharply yesterday closing at a new all-time low of 30.50 per U.S. dollar.

MEXICO: President-Elect Andrés Manuel López Obrador announced yesterday the first details of a campaign pledge to build a tourist train on the Yucatán peninsula saying the project will be twice as big as originally promised. What was to be 560 miles of track from the resort city of Cancún in Quintana Roo to the Mayan ruins of Palenque in Chiapas will now be a 930-miles-circuit that will also go through the ancient cities of Chichen Itzá in the state of Yucatán and Calakmul in Campeche. The “Mayan train” would cost between $6 billion and $8 billion, compared with the previous figure of $3.2 billion, that will be financed through both public and private investment.

CUBA: The popular consultation of the island’s new constitution began yesterday, marking what would have been the 92nd birthday of late leader Fidel Castro. Under the leadership of 7,600 citizen duos chosen by the government, all citizens over 16 years old will be able to make suggestions to the already drafted new charter from now until November 15. A recent decision by President Miguel Díaz-Canel will allow the more than two million exiled Cubans to participate in the process. Since 1959 Fidel Castro had considered Cubans who left the island traitors.

PANAMA: General Attorney Kenia Porcell said the acting president of the country’s highest court, Hernán de León, told her that the court is going to drop the case against jailed former president Ricardo Martinelli. Martinelli was recently extradited from the U.S. to face charges of political espionage and embezzlement.

VENEZUELA-COLOMBIA: An intense rainy season has caused the Orinoco river to rise to its highest level in recorded history. Over 10,000 people have been affected by floods in the Venezuelan city of Puerto Ayacucho, capital of the southern Amazonas state, and about as many across the river in Puerto Carreño, the capital of the Colombian province of Vichada. Floods have lasted for over 70 days.

VENEZUELA-UNITED STATES: Venezuelan State oil company PDVSA is appealing a decision by a U.S. District Court announced on Thursday allowing Canadian gold miner Crystallex to go after Venezuela’s prized U.S.-based oil refineries to compensate it for the 2008 nationalization of its assets in the South American country. The ruling is a blow to crisis-wracked Venezuela, which stands to lose its most valuable asset outside of the country.

VENEZUELA: Thousands marched again yesterday to support President Nicolás Maduro and reject the explosives incident from a week before that he has called an “assassination attempt.”

CHILE: President Sebastián Piñera’s new culture minister, Mauricio Rojas, was forced to resign after only four days on the job by a public outcry over comments he made in 2015 and 2016 criticizing the Museum of History and Human Rights, which documents abuses during the military dictatorship of Augusto Pinochet. Rojas said at the time that the museum “is a left-wing museum created to tell a false version of Chile’s history because it hides the very important part of how we got to hate each other in such a way.” Rojas said those comments did not reflect his current view and that he had “never diminished nor justified unacceptable, systematic and grave human rights violations that happened in Chile.” Piñera accepted his resignation saying he did not agree with what Rojas had said but criticized “some groups that want to impose a universal truth and have no tolerance or respect for freedom of speech and opinion.”

PARAGUAY: The Indigenous Guarani language has since yesterday an official grammar published by the Guarani Language Academy. This is a big step towards compliance with the Languages Law that made Guarani Paraguay’s official language alongside Spanish, and demands that both languages be used in equal standing in all government communications and all public officials be fluent in both languages within three years. Half of Paraguay’s population speaks Guarani and most of the rural population speaks it exclusively.