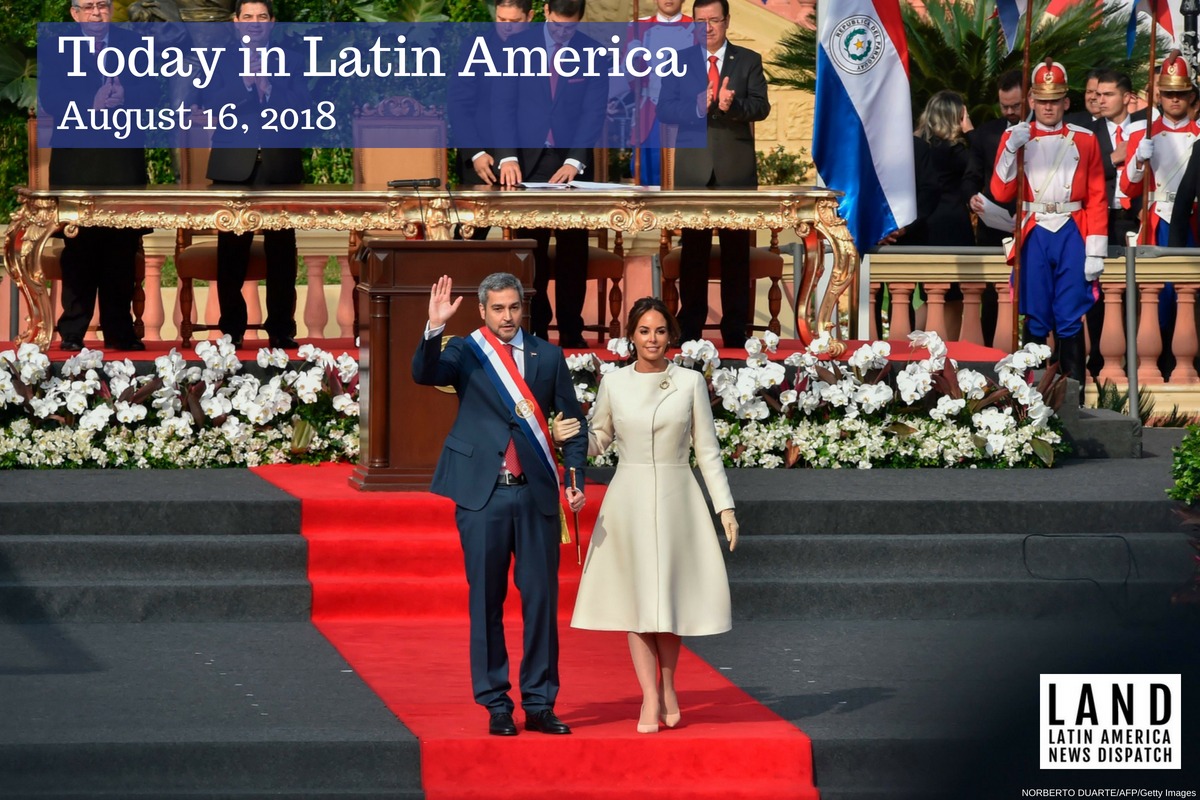 PARAGUAY: Mario Abdo Benítez was sworn in yesterday as Paraguay’s new president. The right-wing former lawmaker promised to continue business-friendly policies and to combat poverty and corruption. Paraguay is one of the poorest and most corrupt countries in Latin America, according to the corruption watchdog group Transparency International, it ranks 135 out of 180 nations.

Belonging to the Colorado party that has ruled the country for a century and the son and namesake of the longtime private secretary of former dictator General Alfredo Stroessner, who ruled from 1954 to 1989, Abdo Benítez has faced criticism for defending the former ruler. The new president said he “rescues the policies that had a positive impact, that doesn’t mean vindicating the person.” About 20,000 people were detained and tortured during General Stroessner’s dictatorship and about 400 were killed. The new president left Paraguay at the end of the dictatorship when he was still a teenager to study marketing in the United States.

Outgoing president Horacio Cartes left the inauguration ceremony before it finished to show his frustration with the new president, who didn’t back his effort to take an elected seat in the Senate that would have given him greater influence and possibly immunity from any future efforts to prosecution.

MEXICO: An elect lawmaker was kidnapped yesterday while traveling through the central state of Hidalgo, just north of Mexico City. Kidnappers shot at the car that Azucena Rodríguez Zamora was riding with two other people causing it to overturn and took her out from the car crash. The two other people who were in the car are wounded, one by gunshot. Rodríguez Zamora is supposed to take office for the PRD part on Sept. 1 but the motives behind her kidnap are still unknown.

CUBA-U.S.: Specialists criticized the medical report commissioned by the U.S. government to the University of Pennsylvania on the illnesses suffered by its embassy staff members in Cuba, which have been described by Washington as an “acoustick attack”. In four separate letters to the Journal of the American Medical Association, which published the original medical study, groups of doctors specializing in neurology, neuropsychiatry and neuropsychology say the report misinterpreted test results, overlooked common disorders and dismissed psychological explanations for the symptoms.

NICARAGUA: The National Assembly passed on Tuesday a 9.2-percent reduction of the 2018 budget. About $180 million will be cut because of the economic impact of months of anti-government unrest that have caused a drop of $220 million in government income. The private sector estimates that 200,000 people were left unemployed by the continuing crisis.

NICARAGUA: President Daniel Ortega announced yesterday that the commission created by the Permanent Council of the Organization of American States to facilitate an end to the political crisis is no longer welcome. Ortega called the commission “interventionist” and said its members must leave Nicaragua immediately. Meanwhile, some 5,000 people marched through the streets of Managua to demand the immediate release of all political prisoners who have been jailed during the socio-political crisis.

VENEZUELA: The United Nations said on Tuesday that it estimates 2.3 million people, about 7 percent of Venezuela’s 32.8 million population, have left the country. Most have gone to Colombia, Ecuador, Peru and Brazil. The country is in a crisis of hyperinflation and widespread shortages of food and medicine that President Nicolás Maduro blames on an economic war being waged by the United States and Europe.

BRAZIL: Accompanied by about 10,000 supporters, some of which had begun marching towards Brasília days earlier, the Workers’ Party registered yesterday jailed former president Luiz Inácio Lula da Silva as its candidate for president. Brazilian law says anyone who has had a conviction upheld is barred from holding office and the electoral court is expected to bar him from running because of a corruption conviction for which he is in prison. But Lula and his supporters insist he is innocent and argue the charges were trumped up to prevent him from running for the presidency once again. Hours later, Attorney General Raquel Dodge filed a request at the electoral court seeking to bar da Silva from running. The party has until September 17 to replace Lula on the ballot, were he to be barred.

ARGENTINA: After the Senate failed to pass a bill legalizing abortion during the first weeks of pregnancy, public health authorities have authorized the manufacture by local pharmaceutical companies of a drug that is used to interrupt pregnancy. Misoprostol, which is imported and sold in Argentina for stomach ulcers, is considered by the World Health Organization one of the safest ways to interrupt a pregnancy and will now be manufactured locally and distributed to hospitals for obstetric use in the specific cases when abortions are allowed in Argentina—rape and danger to the woman’s health.