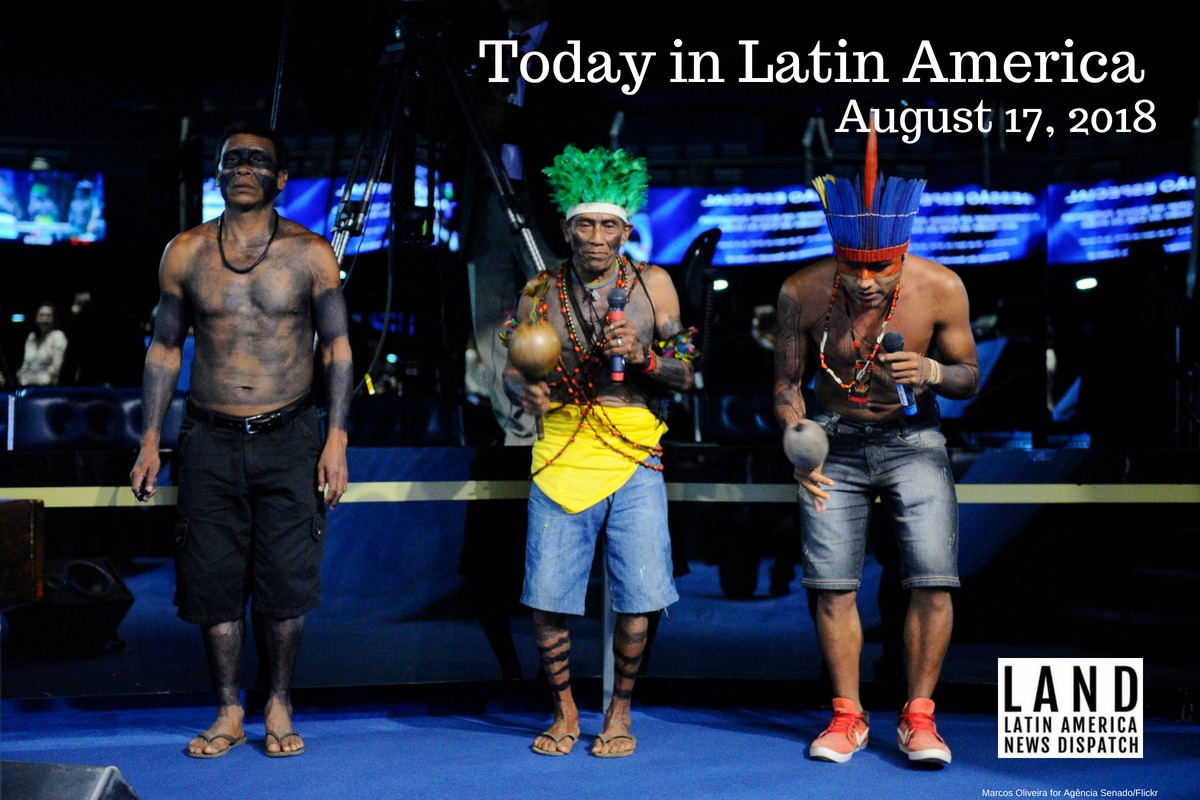 BRAZIL: An indigenous leader was allegedly murdered by logging mafias over the weekend in the northern state of Maranhão, authorities confirmed yesterday that they are investigating the death. Jorginho Guajajara was a traditional leader of the Guajajara people, one of Brazil’s largest indigenous groups. Up to 80 Guajajaras have been killed since 2000 as part of a fierce conflict with illegal loggers, said indigenous rights group Survival International. Indigenous activist Sônia Guajajara, who is running as vice-presidential candidate for the Socialism and Freedom party, said: “Our people are dying on their land. This was not an isolated case, but part of an ongoing genocide.”

The Guajajara people support a self-defense armed group called the Guardians of the Amazon that have taken radical action to reduce illegal logging in their territories tying up loggers, torching their trucks and tractors and kicking them off the reserves. Just last May, the Brazilian environmental protection agency had to send in armed back-up after the Guardians captured a logging gang and burned their truck. Some reports say Jorginho Guajajara was a member of the group.

Brazil is the country with the highest number of murdered land activists according to the watchdog group Global Witness, last year 57 activists were killed in Brazil.

MEXICO-UNITED STATES: U.S. Energy Secretary Rick Perry met on Wednesday with the future energy minister for the incoming administration of Andrés Manuel López Obrador, Rocío Nahle, and said he supports the plan to increase Mexico’s energy independence because it would benefit North America’s economic security, even if it could mean fewer purchases from U.S. refineries. López Obrador had announced last month a $16 billion investment plan to increase Mexico’s oil production, refinery capacity and electrical generation. Mexico’s crude production dropped from 3.4 million barrels per day in 2005 to 1.88 million barrels per day in the first half of 2018.

VIRGIN ISLANDS: A jury convicted a former member of the U.S. territory’s legislature of fraud and theft yesterday. Former Senator Wayne James diverted $70,000 meant for research into a 19th-century labor uprising and kept for himself about 1,600 pages of documents acquired by Congress from the Danish National Archives intending to use them to write a screenplay about the uprising against Dutch colonial rule. Prosecutors said he used the money to pay debts and fund his re-election. James served a single term in 2009-10 and was arrested in Italy in June 2016.

HONDURAS: Authorities declared a state of emergency in the southern provinces of El Valle and Choluteca because of a major drought that is causing a famine. The Ministry of Agriculture and Livestock said 72 percent of corn crops and 75 percent bean crops have been lost and about 65,500 families require emergency food in 34 municipalities. The state of emergency will be in place from August 15 until December 31.

BELIZE-TAIWAN: The president of Taiwan, Tsai Ing-wen, arrived yesterday in Belize for her first state visit, where she hopes to cement diplomatic ties. After Burkina Faso and the Dominican Republic shifted diplomatic alliances to China earlier this year the tiny Central American country is one of only 18 remaining countries that recognize Taiwan.

COLOMBIA: Attorney General Néstor Humberto Martínez said Brazilian construction firm Odebrecht paid at least $32.5 million in bribes in Colombia, three times the amount that it originally confessed to in a 2016 plea agreement with Brazilian and U.S. authorities. Almost three dozen people have already been indicted and five convicted, including an ex-senator and a former deputy minister. Colombia is the only country in the region that rejected offers from Brazil to share evidence in exchange for not implicating Odebrecht nor its executives in crimes. Three Brazilians who held positions with Odebrecht or its subsidiary have been indicted and have arrest orders pending.

VENEZUELA: The “Venezuelan Supreme Court in Exile” found President Nicolás Maduro guilty of money laundering and corruption during a symbolic trial held simultaneously from Bogotá and Miami on Wednesday. Ousted chief prosecutor Luisa Ortega accused Maduro of accepting $35 million from the Brazilian construction giant Odebrecht and a panel of self-exiled Venezuelan judges sentenced him to 18 years and three months in prison and ordered him to pay a $25 million fine. A video leaked last year showed an Odebrecht executive saying a Maduro aide asked for $50 million to finance the 2013 presidential campaign of which the construction firm had agreed to pay $35 million in exchange for priority for its projects. Maduro has denied the allegations.

CHILE: Three airplanes had to make emergency landings after Chilean aviation authorities received what turned out to be a series of false bomb threats yesterday. A LATAM airlines plane that was flying between Lima and Santiago had to be landed in the southern Peru city of Cusco and two planes belonging to Sky Airlines flying to Rosario, Argentina, and Calama, in northern Chile, were turned back to Santiago. Authorities received eight other bomb phone-in threats pointing to planes that were not in flight but found no explosives.