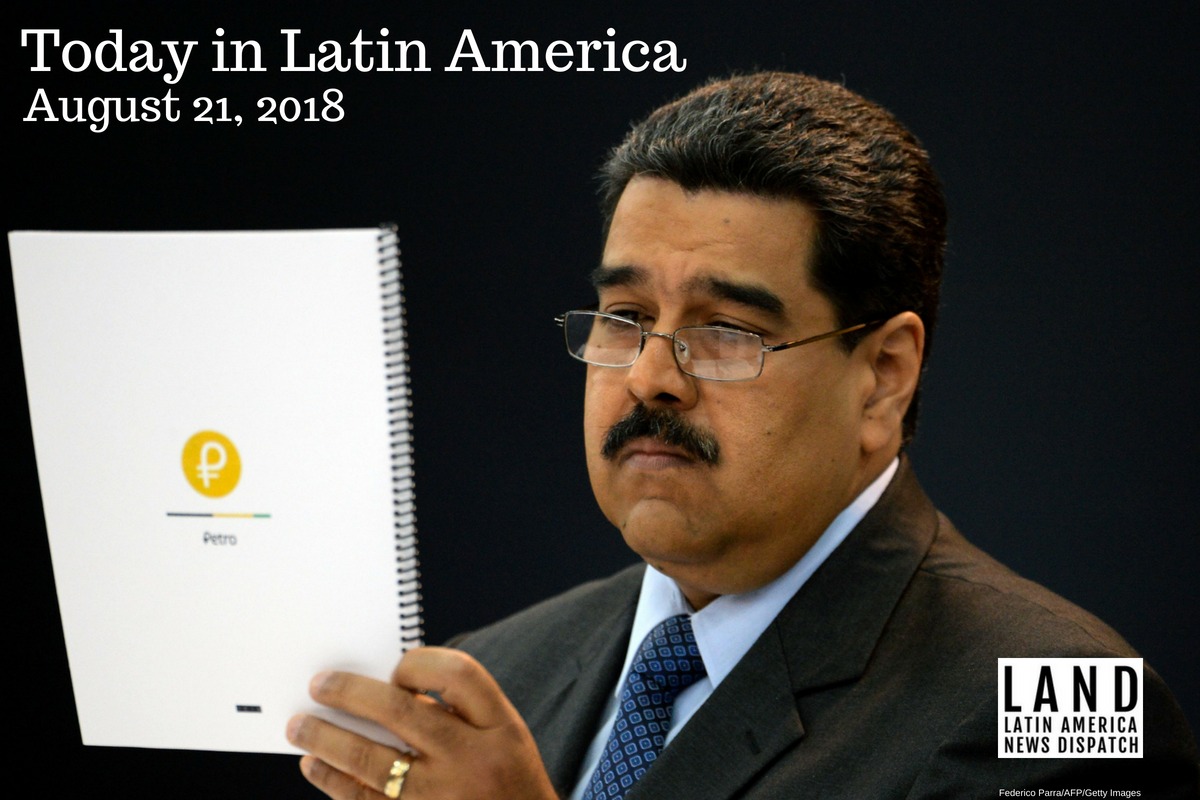 VENEZUELA: The new currency with five lopped zeroes announced weeks ago by President Nicolás Maduro began circulating yesterday after a bank “blackout” the night before to allow the transition. By early morning, the biggest private banks were running smoothly and other smaller and state banks hoped to clear some hiccups by early afternoon. On Friday, Maduro announced a new monthly minimum wage of 1,800 sovereign bolivars, a 3,300 percent increase over June’s wage of just over 5 million in the old currency, but still around $30 at the widely used black market rate. The government promised to help small businesses and industry absorb the financial hit from the wage hike to prevent prices from rising.

The new currency, called the sovereign bolivar, will be tied to the petro—a sort of cryptocurrency announced in February by the Venezuelan government that is tied to the price of oil. One petro equals a barrel of oil, which at current prices is about $60, or 3,600 sovereign bolivars. This implicitly means the government is abandoning the current official rate of 248,832 bolivars per dollar for the black-market exchange rate of 6 million bolivars per U.S. dollar.

Venezuela’s hyperinflation crisis is set against a backdrop of crippling U.S. financial sanctions, a foreign debt crisis and a plunge in oil production and the price of oil. Social tensions are rising amid widespread shortages of food and medicine, as well as rolling blackouts. Opposition leaders are calling for a nationwide strike and protest today, to which Maduro is responding by calling for his supporters to go out to the streets too.

UNITED STATES: The Inter-American Commission on Human Rights said yesterday it has granted precautionary measures for migrant children separated from their families by the U.S. government under the policy of zero tolerance. Although authorities have reunited over 2,000 migrant children with families or sponsors, several hundred remain separated. The Organization of American States commission granted the measures in response to two requests, one from Mexico, Colombia, Ecuador, Guatemala, Honduras and El Salvador; and the other one from advocates and attorneys in the U.S. Precautionary measures are a protection mechanism designed to ensure a rapid response in serious and urgent situations where there is an imminent risk of irreparable harm.

HAITI-DOMINICAN REPUBLIC: A shootout at the border wounded up to six Haitians and one Dominican soldier on Saturday. After the incident, disturbances broke out on the Haitian side, with police firing tear gas. Haitian president Jovenel Moïse denounced a territorial violation by Dominican troops but Dominican Defense Minister Rubén Paulino Sem denied this, calling Moïse’s statement “inappropriate.” Paulino Sem said soldiers tried to stop a contraband load of cement in the neutral zone called “The chain” at the border crossing of Carrizal when they came under fire. Commercial traffic isn’t allowed through that crossing.

EL SALVADOR: Taiwan broke off diplomatic ties with El Salvador earlier today after the Central American country defected to China. The break means Taiwan is now only recognized as a sovereign nation by 17 countries. Taiwanese Foreign Minister Joseph Wu on Tuesday criticized China for luring away Taiwan’s allies with promises of vast financial aid and investment, saying Taiwan refuses to compete with China in buying diplomatic support. The Taiwanese government accused El Salvador of asking for an “astronomical sum” of financial aid for a port project that the Taiwanese thought wasn’t economically feasible and to help the ruling party win in elections.

COLOMBIA: The whereabouts of four of the demobilized FARC guerrilla’s most important leaders are unknown. The former commanders known as Iván Márquez and El Paisa allegedly left the reintegration camps after being warned of an impending military raid, possibly as much as two weeks ago. Romaña and El Zarco seem to have disappeared even earlier. Despite the major implications of the FARC leaders’ disappearance, President Iván Duque and the military have remained mostly quiet with Defense Minister Guillermo Botero only acknowledging “we don’t know where Iván Márquez and El Paisa are.” The former rebels are free to leave the camps as long as they present themselves in court when required to, but even FARC senator Victoria Sandino expressed concern saying she did not know where they were.

BRAZIL: At least 14 people were killed yesterday in Rio de Janeiro during operations by soldiers and police in poor favelas and a suburb. About 4,200 soldiers, backed by armored vehicles and aircraft, raided the favelas of Maré, Complexo do Alemão and Penha, killing eight people, possibly more, and suffering two losses. In a separate incident in the suburb of Niterói, across the bay from Rio de Janeiro, six suspected armed criminals were shot dead by police during a rush-hour car chase that caused traffic chaos and the temporary closing of one of Rio’s main bridges.