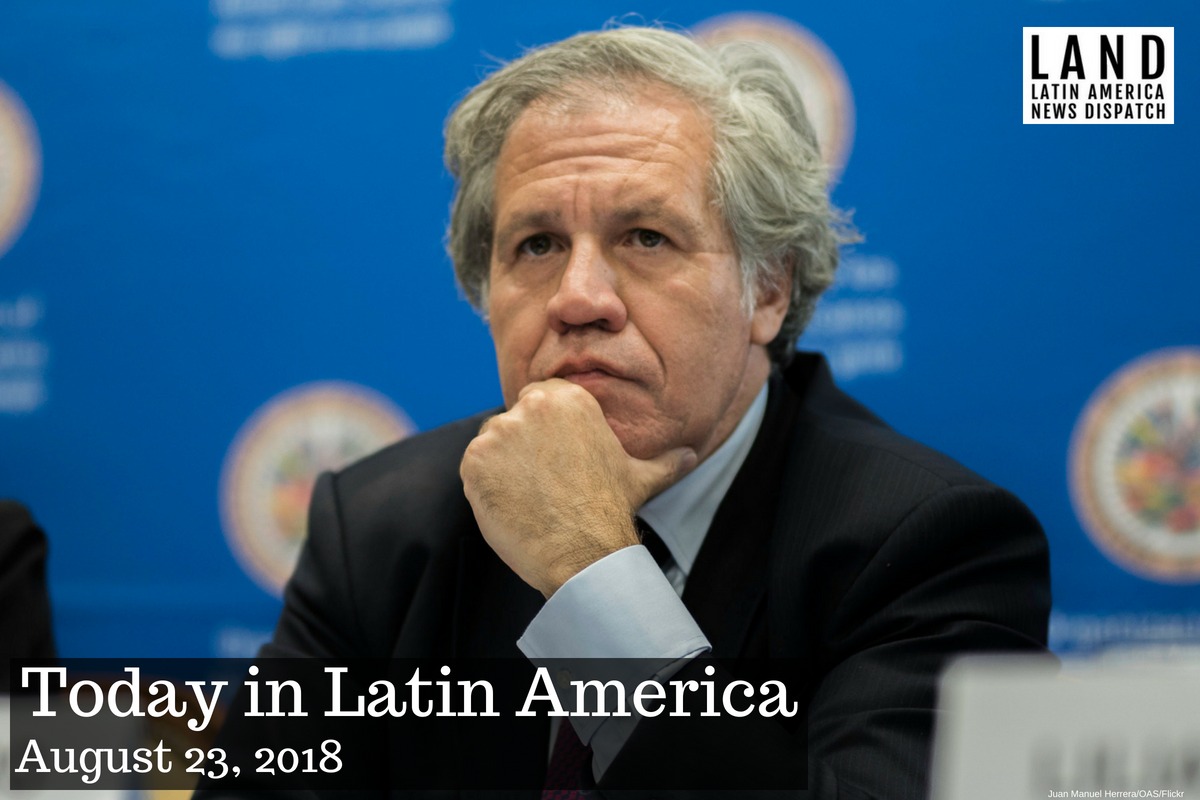 VENEZUELA: The General Secretariat of the Organization of American States issued yesterday a press release urging its member countries to “ignore extradition requests from the dictatorship” of Venezuela, referring to the requests for the alleged perpetrators of an explosives attack on President Nicolás Maduro earlier this month. The organization led by Luis Almagro said that the only legitimate institutions in Venezuela are the National Assembly, the exiled Supreme Court of Justice designated by the National Assembly and the banished Attorney General dismissed by the “fraudulent” National Constituent Assembly. “Venezuela is a dictatorship,” the communiqué says, “the National Constituent Assembly was elected through fraud, and the Executive Power and the Electoral Power have illegitimate origins and the procedures for the composition of their highest magistrates have been either unconstitutional or fraudulent.”

The Venezuelan Attorney General’s Office announced yesterday that 25 people are now in custody and 43 are being investigated on charges related to the explosives attack that injured seven people.

MEXICO-ECUADOR: Mexican authorities announced on Wednesday that the Ecuadorean survivor and five victims of a 2010 massacre by the Los Zetas drug cartel will be awarded damages by the Mexican state. In August 2010, Los Zetas kidnapped a bus of Central and South American migrants in the town of San Fernando across the border from Brownsville, Texas, in the northern state of Tamaulipas and killed 72 people, unintendedly leaving three survivors. The Ecuadoreans are the first victims to receive reparations.

CUBA: The state telecommunications company launched yesterday the second of two test runs for a promised mobile internet network. From early morning until midnight, people were able to gain free internet access through their phones, although an apparent flood of users made it hard for some people to connect. In Cuba public access to the internet was limited to tourist hotels until 2013 but since the government has authorized Wi-Fi hotspots and cybercafes.

GUATEMALA: The Supreme Court allowed on Monday a request from prosecutors and a U.N.-sponsored anti-graft commission to lift President Jimmy Morales’ immunity of office be decided by Congress. Morales is accused of receiving at least $1 million in undeclared contributions during the 2015 presidential campaign that brought him to office. Two similar previous efforts failed, once in congress and once before the Supreme Court, and it is unlikely the opposition will be able to now find the 105 votes needed to lift the immunity from prosecution that comes with the presidency.

COSTA RICA: Authorities accused yesterday former President Óscar Arias of malfeasance in relation to illegally approving a gold mine project during his second term in office, 2006-2010, despite a moratorium on gold mining put in place by the government of his predecessor Abel Pacheco. The Crucitas gold mine never advanced beyond site clearing because a court later found that its permits were illegally granted. Arias won the 1987 Nobel peace prize during his first term in office, 1986-1990, for his role in the peace processes of Central America.

COLOMBIA: Authorities rescued 49 women who were being held as sex slaves in underground basements in the Caribbean tourist city of Cartagena, said the General Attorney’s Office on Monday. The women, almost half of which are undocumented Venezuelan immigrants, were lured to Cartagena with the promise of work but were then forced into the sex trade. This is the third such operation in less than a month in Cartagena.

ARGENTINA: One of the founders of the human rights organization Grandmothers of Plaza de Mayo, Maria Isabel Chorobik de Mariani, passed away on Monday at 95 years of age. For decades, the group has been searching and protesting weekly for the children who were stolen from people who were killed or forcibly disappeared by Argentina’s 1976-1983 dictatorship. The group’s advocacy has led to the identification of 128 of about 500 children they estimate were stolen and given in adoption to families loyal to the regime. Chicha Mariani, as she was lovingly known, never found her granddaughter Clara Anahí Mariani who was stolen by authorities in 1976 when she was three months old. Mariani’s son and daughter in law were murdered.

ARGENTINA: Over 3,000 workers at the Rio Santiago Shipyard in La Plata began protesting on Tuesday morning against massive layoffs. At least 15 people were injured and 5 detained during confrontations with the police. The workers are still on strike and camping outside the seat of government of the Buenos Aires province. Also, professors of Argentina’s 57 public universities and the high schools ascribed to them began a strike on Tuesday that is meant to last until tomorrow to demand a 30 percent wage raise that equals inflation.