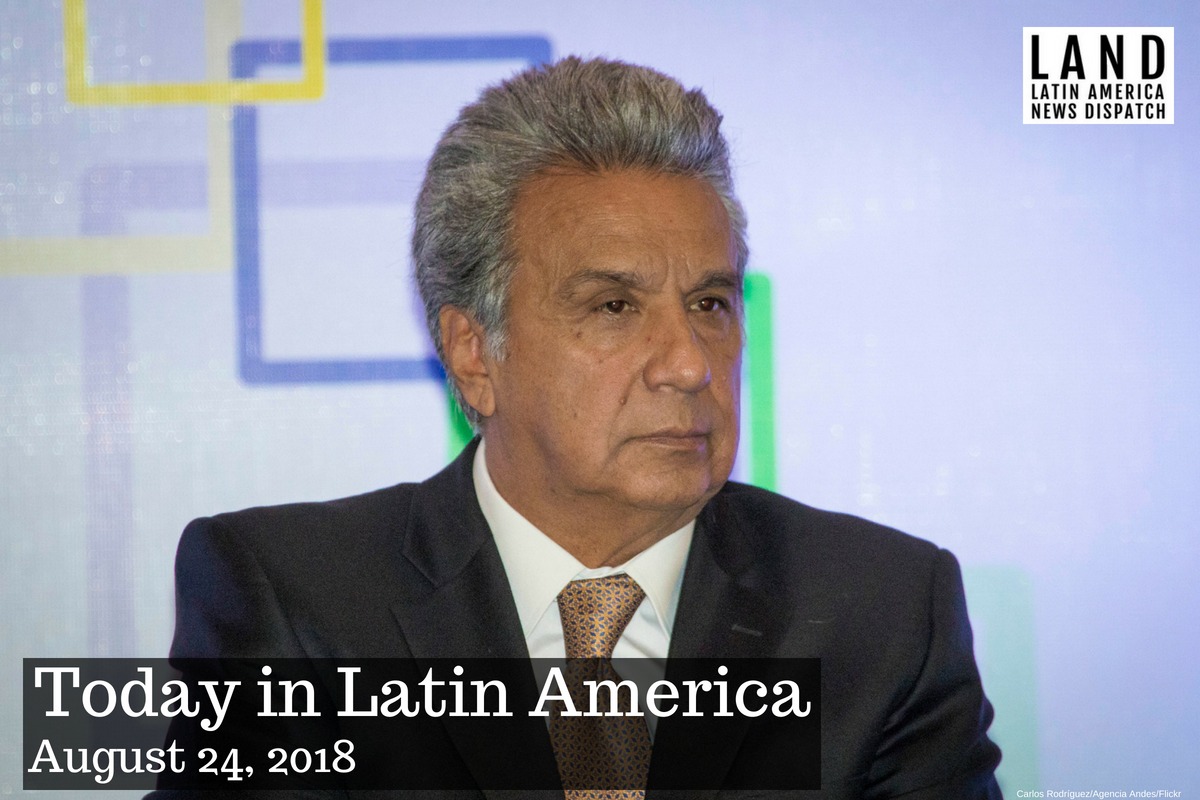 ECUADOR: The transitory Citizens Participation and Social Control Council dismissed all nine justices of the nation’s highest court on the argument that there had been a conflict of interests that benefitted former President Rafael Correa at the time of their designation in 2012. The Council also accused the Court of postponing judicial decisions and of suspicious management of public funds. Correa said on Twitter that the decision amounts to “a true coup.” The justices have three days to challenge the decision.

The Council was restructured through a referendum promoted by President Lenín Moreno in February that terminated the tenure of the then council-members and allowed for the designation of new temporary members proposed by the president and ratified by Congress, all while elections are held in May 2019. The Council is in charge of designating the state attorney, all superintendents, the ombudsman, the public defender, the attorney general, the comptroller general, the members of the National Electoral Council as well as the judges of the Constitutional Court.

Moreno was elected to the presidency as the successor of Correa and his left-wing progressive politics but turned around swiftly and only two months later was attacking his predecessor on social media and calling him a traitor. Moreno has continued to distance himself from his predecessor’s politics ever since. This week he announced austerity measures that include cutting almost 1,000 public jobs by integrating ministries and the elimination of fuel subsidies hoping to reduce the government spending by almost one billion dollars. And Foreign Minister José Valencia announced yesterday that Ecuador has decided to abandon the Bolivarian Alliance for the Peoples of Our America, or ALBA for its Spanish initials, a regional bloc created in 2004 by Correa’s close ally late Venezuelan President Hugo Chávez. Valencia said the decision hopes to pressure Venezuela to find a solution to the crisis that has led to a massive exodus. Between January and June almost half a million Venezuelans have entered Ecuador, most passing through to Peru and Chile. Chief of Staff Eduardo Jurado said Ecuador’s government “condemns the inhumane situation to which the Venezuelan government is subjecting its citizens.”

MEXICO: A police raid against illegal fireworks workshops in the town of Tultepec, just north of Mexico City and famous for its pyrotechnics, ended in confrontations between residents and officers yesterday morning. Residents fired powerful bottle rockets from rooftops, threw rocks at police and blocked the streets with cars to prevent the raids. Locals then asked to speak with the mayor of Tultepec to denounce what they said were abuses committed by the police during the raid but ended up trying to attack the mayor himself.

CUBA: The United States eased its travel advisory warning to Cuba yesterday after acknowledging that the unexplained illnesses suffered by it Embassy workers, which Washington still calls “attacks,” seemed to target its personnel only and not private citizens. The U.S. travel advisory was reduced from “reconsider travel” to “exercise increased caution.” The number of U.S. visitors to Cuba for the first half of the year (not including Cuban-Americans) had fallen 24 percent to 266,000, presumably because of the travel advisory issued last year. No similar travel warning was issued when U.S. officials in China suffered the same symptoms.

GUATEMALA-EL SALVADOR-HONDURAS: The World Food Program and the Food and Agriculture Organization issued a joint statement warning about the drought that is affecting millions of people in Central America. The United Nations’ programs said a massive drought during June and July is affecting crops mainly in Guatemala, El Salvador, and Honduras, where 281,000 cultivated hectares have been lost and the food security and nutrition of 2.1 million people are in jeopardy.

EL SALVADOR: The U.S. said it will “review” its relationship with El Salvador after the tiny Central American country decided to switch diplomatic alliances from Taiwan to China earlier this week. Spokesperson Sarah Sanders said San Salvador’s apparent receptiveness to China’s interference the Western Hemisphere was worrisome. And a spokesman for the U.S. State Department who did not want to be identified by name said the US. is “deeply disappointed” by El Salvador’s decision to switch alliances. A similar switch by the Dominican Republic four months ago was not followed by a similar reprimand, but Beijing-Washington relations were not as strained as they are now.

COLOMBIA: The highest administrative court sentenced the Colombian state on Wednesday to compensate the victims of a bomb attack by the FARC former guerrilla to the El Nogal social club in February 2003 where 36 people died. The judges said that the Colombian authorities didn’t take enough precautions to protect civilians even though they had information about a major attack being planned possibly targeting the club and even endangered civilians by using the club’s facilities for high-level reunions by public servants and the defense minister spending the night in the club’s hotel. President Iván Duque said he respects the judges’ decision but considers it “unbalanced.”

ARGENTINA: After Congress unanimously approved on Wednesday a petition by Judge Claudio Bonadio to search the properties of former president and current senator Cristina Fernández as part of a corruption probe, forensic scientists, dogs and firefighters carried out the raids on two houses in the southern Patagonia region and one apartment in Buenos Aires on Thursday. Fernández denied any wrongdoing and voted to allow the partial lifting of her immunity to allow for the searches to be conducted.