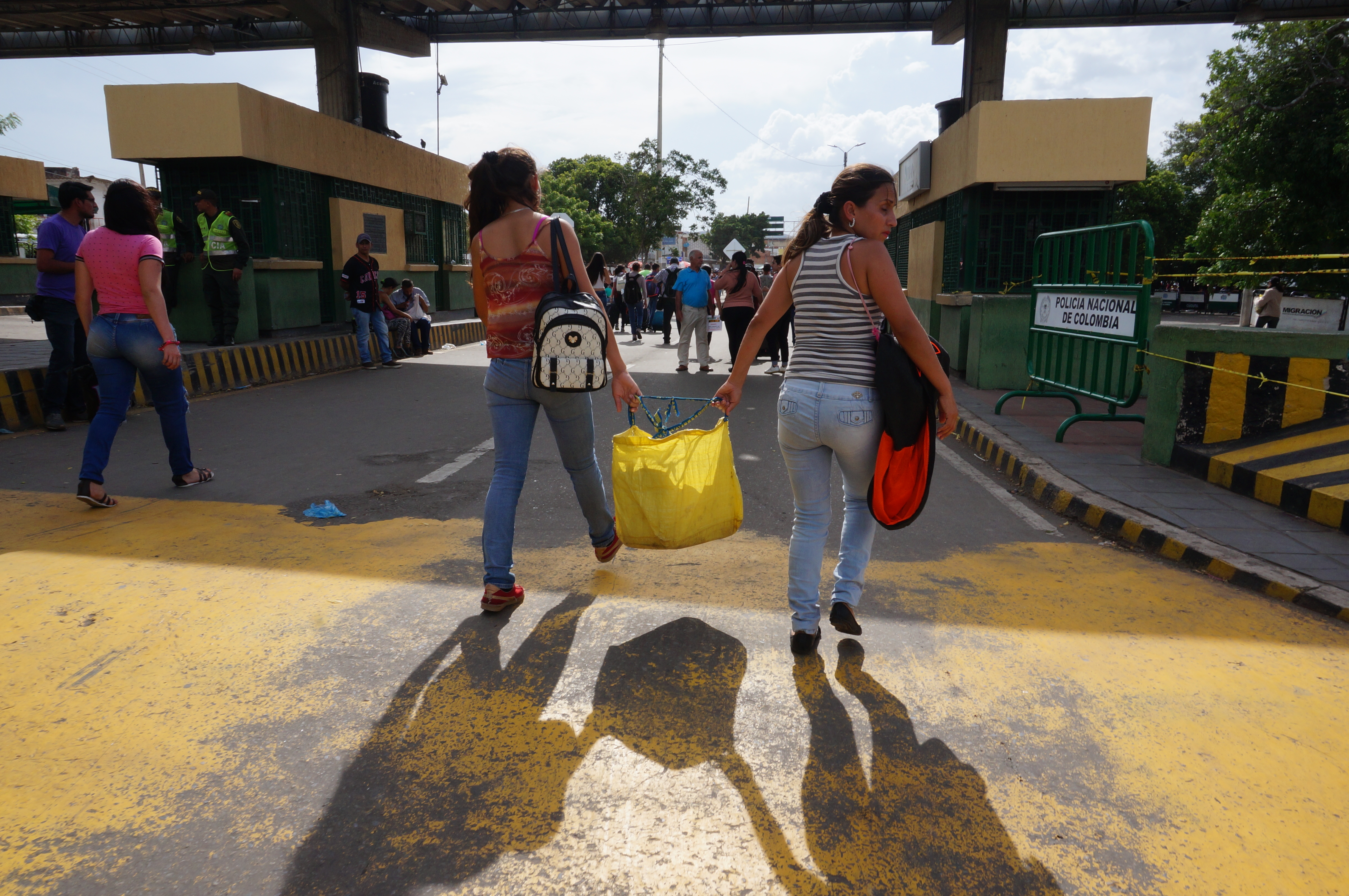 CÚCUTA, COLOMBIA — A family of eight walk along the mountainous highway out of Cúcuta. It is hot and muggy in this part of northern Colombia, and the walkers quickly down bottles of water when they take a break. They have been walking for just half an hour when we meet, but their journey has already been long, and will be longer still. From Caracas, Venezuela, they fled their home as the country tumbles further into economic and social turmoil.

In the last 18 months, more than a million Venezuelans have crossed over to Colombia, and tens of thousands are still passing through every day. Most cross the Simón Bolívar International Bridge, joining San Antonio del Táchira on the Venezuelan side and Villa del Rosario in Colombia—its strained concrete now a symbol of a migration crisis comparable to refugees in the Mediterranean, and one of the worst in Latin America’s history.

“There is no hope in Venezuela,” says Óscar Chacón, the father. “It is so sad that Venezuela had been a rich country, and now we have to do this.”

As many as 90% of Venezuelans live in poverty, according to a recent study, while more than 60% admitted waking up hungry because they couldn’t buy food. Medical services are broken: there are chronic medicine shortages, 14% of intensive care units in the country have been shut down, and the number of women dying from childbirth has risen by 65%.

Venezuelans are leaving on mass. An estimated 2.3 million have fled since 2014, a year after populist leader Hugo Chávez died and his successor Nicolás Maduro took power. With inflation in Venezuela expected to reach 1m% by the end of this year, the Chacóns felt they had no other choice but to get out.

“It is so hard, but we have the strength to work for our family,” Óscar says. He has already lined up a job in a town near Pamplona. It is about two hours drive from Cúcuta, but in a group of that size, they have struggled to get a bus. So they are left to travel by foot.

His four-year-old son, Andrés, sits on the ground playing with a passing stray kitten. He’s tired, he says, but nods and smiles when asked if he wanted to leave Venezuela.

Further along the highway three men sit beside the road sharing water. “The situation in Venezuela is terrible. You can’t get food, there is nothing,” says Carlos Rodríguez, 45, whose journey started in San Carlos.

His wife, children, and grandson remain in Venezuela. Rodríguez plans to find work elsewhere and send money “so they may survive,” he says, his voice trembling. “I never thought in my life I could leave my family to go somewhere else. But I had no option. I left my family because I don’t want them to live like this.”

No one in the group has enough money for transport. Walking is their only option. The soles of their shoes are worn, and they carry little but a few valuable possessions and extra clothes. Rodríguez shows me his passport and papers to get to Ecuador. He keeps them folded neatly and carefully in a Bible. He is comparatively lucky—in mid August, thousands of Venezuelans seeking to get into Ecuador were left freezing at the border as new entry requirements came in. An identity card was sufficient before, but now migrants need a valid passport.

August saw a tighter response among countries dealing with the exodus. Peru imposed new visa restrictions in August, and Brazil briefly shut its border earlier in the month. Colombian authorities warned the decisions of surrounding countries to shut their borders to those without passports would only drive more migrants to find illegal means. “Asking for passports from a nation that doesn’t have them, and whose government doesn’t facilitate the issuance of such document incentivizes irregularity,” Christian Kruger, head of Colombia’s migration authority, said in a statement.

Manuel, 18, who worked with Rodríguez on a farm, traveled here without a passport. Many migrants without documents can’t afford the bribes or the months-long wait to get a passport issued in Venezuela’s crumbling bureaucracy. Manuel says he doesn’t know what he is going to do. His fear is palpable.

“I’m tired. I don’t want to think about the future,” he says.

Latin American states only announced on September 5 they would agree to accept Venezuelans with expired papers.

Alba Lucy, a pastor who runs a church in Cúcuta, has been on the frontline supporting migrants since the crisis began. She says the situation is getting worse. Walking through the mass of people by the bridge waiting with suitcases or running makeshift market stalls, she offers some food, water, and a prayer. “When you come here, it feels like there’s no hope. It doesn’t matter what you do because it’s not enough.”

One woman told her: “Whoever gets to Venezuela cries, because it’s not the country we had before.”

Maduro has responded by launching a “Return to the Homeland Plan” to welcome back those who left Venezuela, offering to airlift migrants who have been struggling to get by in other countries, including Peru and Ecuador.

The Venezuelan government continues to claim the migration crisis is not as bad as it seems. In a news conference on Monday, Vice President Delcy Rodríguez said these migratory patterns were “normal” and the figures had been inflated to justify an intervention from other countries.

“There has been an intent to convert a normal migratory flow into a humanitarian crisis in order to justify an international intervention in Venezuela. We will not allow it,” she said, according to Reuters.

Maduro has also vowed to curb the country’s hyperinflation. He announced an overhaul of the bolívar, taking five zeros off it and raising the minimum wage by more than 3,000% in a program for “recovery, growth and economic prosperity”. But economists warn it could make things worse, meaning further despair.

Sitting outside a shelter run by the Catholic church in Cúcuta, Gustavo Gonzáles is bitter about his country’s president. He has been in Colombia since December 2017, and spends his days selling whatever he can get his hands on—mostly drinks or fruit.

He hasn’t seen his family in Venezuela in six months, but he sends money back whenever he can. “Even though it’s hard, it’s better to be here. To go there, there is no food, even eggs cost 6,000 bolivars, and the monthly salary is 5,000 bolivars.

“While Maduro is president we can’t do anything.”

Squinting under the midday sun, Gonzáles points to the blankets and bags around him outside the shelter, which only allows residents to stay for five days. “At night there can be a hundred people sleeping here, all Venezuelans,” he says. “Sometimes it’s better for the whole family to sleep on the streets because at least they can share something.”

Gonzáles came here by foot. He walked 14 days to get to Bogotá only to find there was no work. It was too cold to sleep on the streets, so he made the two-week walk back to this battered border town.

At 33, his face is starting to bear the marks of this strain.

“It’s better to walk around the city all day from early in the morning, trying to get money, than to live in Venezuela.”