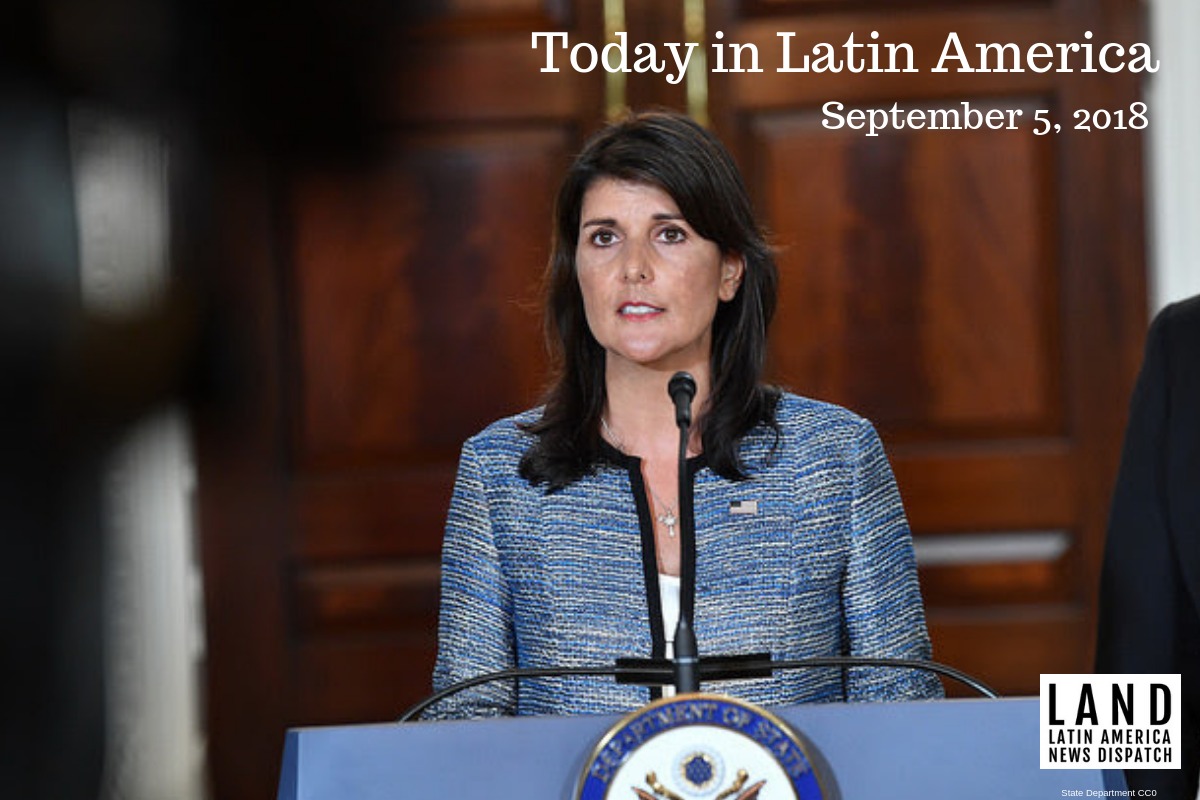 Ambassador Haley at the U.S. Department of State in Washington, D.C. (Photo by State Department CC0)

NICARAGUA: Member states of the UN Security Council tried to block the United States’ proposal to review the ongoing political crisis in Nicaragua. The delegations of Bolivia, China and Russia opposed the initiative promoted by Nikki Haley, U.S. Ambassador to the UN, who fears Nicaragua might become “another Syria or another Venezuela.”  Last week the UN published a report documenting human rights abuses in the country, and Nicaragua’s government responded by ordering the expulsion of the UN’s human rights mission in charge of the investigations.

Nicaragua claims that the UN delegation ignored the goal of the protesters: to overthrow its democratically elected government, in power since 2007. Today, a vote will be held determining whether to dedicate a full session of the Security Council to the situation in Nicaragua. According to some estimates, the Central American country has seen 322 deaths since April 18.

MEXICO: In his final State of the Union address, outgoing Mexican president Enrique Peña Nieto admitted that his administration had not achieved their objective of ending the widespread violence in Mexico. Peña Nieto relied on the military to combat cartel control, a controversial move which often resulted in alleged massacres and human rights abuses. The tactic also did little to alleviate the soaring homicide rate, with a record 25,000 dead in Mexico last year.

MEXICO:  The indigenous town of Cherán in Michoacán Mexico, where residents have self-governed themselves for the past seven years, ushered in its recently elected community council. The country’s Supreme Court recognized the people of Cherán’s right to autonomy in 2014, a strategy sought by the town after years of fighting illegal loggers and organized criminal groups. The new 12-person council —including four women— will govern Cherán for the next three years.

UNITED STATES: In the wake of Puerto Rico’s governor raising the official death toll from Hurricane Maria to 2,975, the U.S. Government Accountability Office published a federal report detailing breakdowns in aid. The report found that staff shortages and a lack of trained personnel slowed government response to the hurricane, stating that 54 percent of federal emergency personnel were not qualified to do the rescue work.

CUBA: The Cuban government announced it will grant two hundred medical scholarships to Colombian citizens. Beneficiaries include 22 former FARC rebels and young men and women from the Colombian countryside. The first group of recipients departed yesterday, with the rest set to arrive later this year. An estimated 7,000 FARC troops have demobilized since it began to disarm in January of this year.

JAMAICA: A Canadian-Jamaican medical cannabis exporter is set to invest $2 million in cataloguing and preserving Jamaica’s indigenous cannabis strains. Diane Scott, CEO of the Jamaica Medical Cannabis Corporation Ltd., emphasized the importance of protecting what is believed to be “some of the best cannabis strains in the world” from contamination and extinction. Carrying small amounts of cannabis in Jamaica became decriminalized in 2015, and the first legal medical facility opened on Mar. 10, 2018.

GUATEMALA: On Monday, President Jimmy Morales barred CICIG Commissioner Iván Velásquez from entering the country after announcing on Aug. 31 that the mandate of the U.N.-backed anti graft entity would not be renewed, President Morales issued a public statement ordering Guatemalan migration authorities to deny access to Commissioner Velásquez. The statement, which was released on social media, called Velásquez “a person who attacks public order and security; affecting governance, institutionality, justice and peace in the country.”

COLOMBIA: The Colombian rebel group ELN announced that it will proceed to release the nine detainees it captured last month despite no confirmed cooperation from the government. The group had been in peace dialogues with the administration replaced by President Iván Duque, who upon taking office in early August said he would think on whether to continue negotiations with the ELN. Despite not receiving their demands, the guerrilla group said they would go ahead with the release, but did not provide a defined date.

BRAZIL: Brazilian officials said that firefighters found remaining bones in the ruins of Brazil’s National Museum after Sunday’s devastating fire that destroyed over 90 percent of the museum’s collection. The statement raised hopes that “Luiza,” a skull that is one of the oldest fossils to be found in Latin America, might be intact. The bones have been transported to a lab to identify their nature and confirm whether they belonged to the exhibits.

CHILE: Chancellor Roberto Ampuero confirmed that Chile will suspend their scheduled negotiation with Bolivia, accusing the Bolivian government of withholding information regarding their ongoing dispute over the resources of the River Silala. Last week Bolivian President Evo Morales reported that Bolivia had filed a counterclaim with the International Court of Justice of The Hague for the “nature and use of the waters” of the Silala River.

ARGENTINA: Argentina’s Economy Minister, Nicolás Dujovne, met with the director of the IMF to request an early release from the $50 billion financing arrangement that was approved on June 20 this year. President Trump was quick to praise President Mauricio Macri for his performance and his response to the crisis.