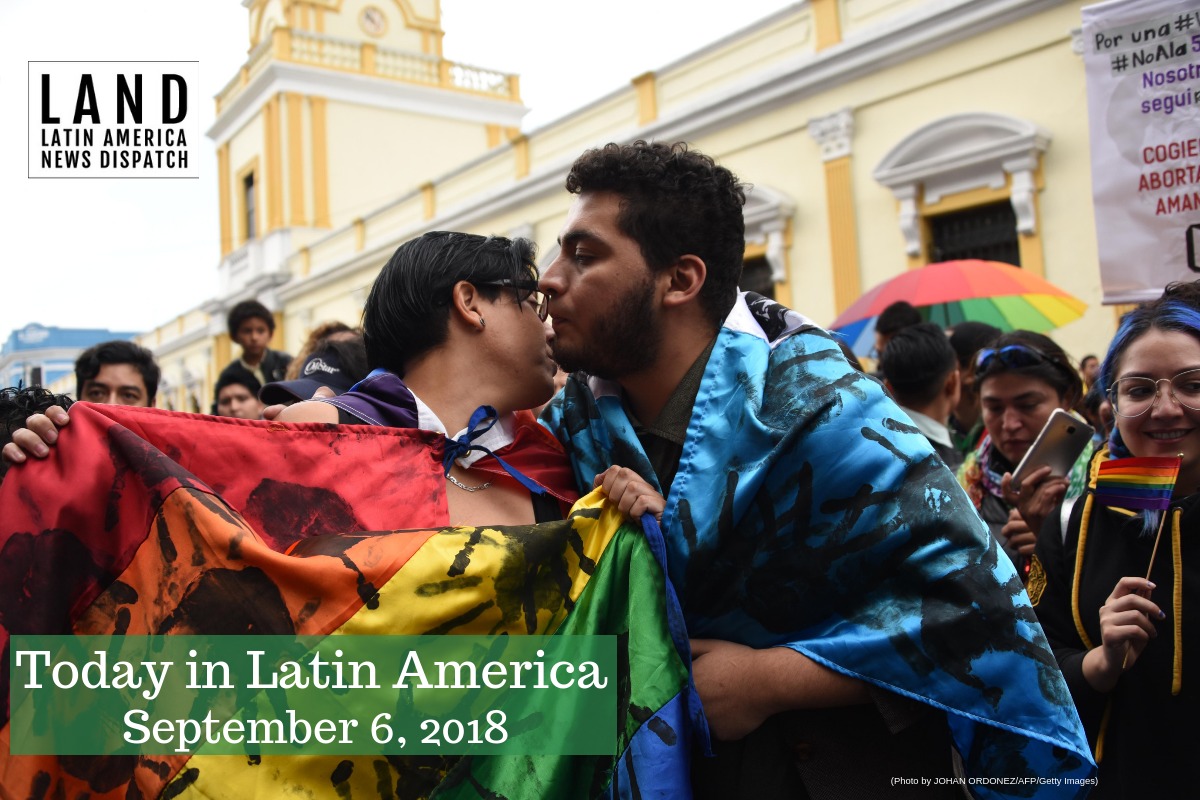 Members of the LGBT community hold a protest outside of Guatemala Congress against the law 5272 that criminalizes LGBT community human rights and abortion -among others- in Guatemala City on September 4, 2018. (Photo by JOHAN ORDONEZ/AFP/Getty Images)

GUATEMALA: Amnesty International slammed a proposed Guatemalan bill that would ban recognition for same-sex couples as well as ending access to a diverse sexual education. In January of this year, Guatemala became one of 20 Latin American countries to accept the Inter-American Court of Human Rights’s ruling for the recognition of same-sex marriage and “gender identity” as a category to be protected against discrimination.

The bill brought before congress, called “The Law for the Protection of Life and the Family,” would also establish prison terms of two to four years for “women who cause miscarriages,” but would allow abortion for rape victims. Currently in Guatemala, abortion is illegal in all cases except for pregnancies that threaten the mother’s life.

MEXICO: Thousands of students joined an organized strike at UNAM, Mexico’s most important public university, demanding an end to violence by groups of thugs collectively known as “porros.” The protesters congregated in response to Monday’s events, when 200 high school students affiliated to the university were attacked during a protest by thugs throwing molotov bombs and rocks, and wielding sticks and knives. It remains unclear who coordinated the attack against the students.

UNITED STATES: U.S. officials continued to negotiate ways to allow Canada to remain in the North American Free Trade Agreement, or NAFTA. Last week, the U.S. reached an agreement with Mexico to substitute the current deal. But until now, Canada had been left aside after President Donald Trump mentioned that he would not make any concessions to his northern neighbors.

GUATEMALA: The U.N.-backed commission investigating corruption in Guatemala, CICIG, announced that the head of the commission, Ivan Velásquez, will continue his post remotely, after President Jimmy Morales’ government banned Velásquez from entering the country earlier this week. The United Nations has not ceded to replace Velásquez —a request from Morales—  and stated that the standing director is to remain in charge “from outside Guatemala until there is more clarity on the situation.”

ECUADOR: Latin American nations urged Venezuela to accept humanitarian aid in a new 18-point mandate signed by 11 nations. The Declaration of Quito intends to alleviate the social crisis and the mass exodus the nation has experienced in the last couple of years. Representatives from Argentina, Brazil, Colombia, Peru, Ecuador, Chile, Costa Rica, Mexico, Panama, Paraguay and Uruguay joined the petition. A second session will be held in November to follow-up on these agreements.

BOLIVIA: President Evo Morales announced a $200 million budget to fund the Universal Healthcare System in Bolivia, which will begin to operate in 2019. The universal insurance will run with public resources and not with individual contributions, he said. Morales promised a free healthcare system since 2014, but the proposal was met with resistance by medicine professionals who didn’t think the health system’s finance and infrastructure were capable to undertake such pressure.

COLOMBIA: The Colombian guerrilla group ELN released three of the nine hostages it had held captive since August 8. The released soldiers were delivered to a humanitarian commission formed by members from the Catholic Church and the Colombian Defensoría del Pueblo or People’s Defense, the institution said on its Twitter account.

The release occurs amid strained negotiations with the Colombian government.

PARAGUAY: Paraguay will move its embassy in Israel from Jerusalem back to its original location in Tel Aviv, said the Minister of Foreign Affairs, Luis Alberto Castiglioni.

The Paraguayan embassy had been relocated this May in support of the United States’ decision to move its own embassy. In response, Israel announced it will close its embassy in Paraguay, while Palestine said it will “immediately” open a new one.