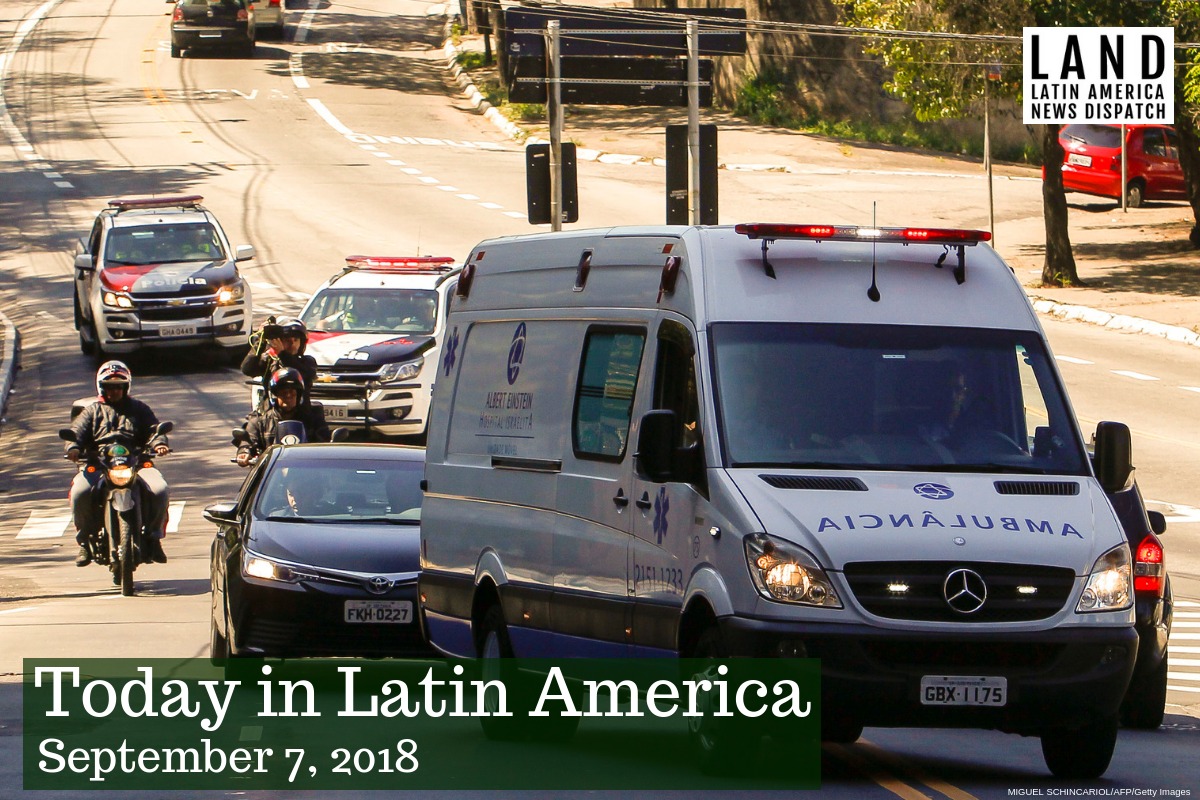 BRAZIL: Jair Bolsonaro, a frontrunner in Brazil’s current presidential elections, was stabbed at a campaign event on Thursday, requiring surgery after losing a severe amount of blood. The candidate suffered punctures in his liver, lung, and intestines and, according to his son, Bolsonaro arrived to the hospital in the city of Juiz de Fora “almost dead.” His attacker has been identified as Adelio Bispo de Oliveira, and according to federal police he appeared to be “mentally disturbed.” It is rare for candidates in Brazil to not wear protective vests when they are campaigning.

Bolsonaro is representing the Social Liberal Party, Brazil’s far-right-wing party. Although he has a strong following, Bolsonaro has been a polarizing political figure and he has been fined and charged for prejudicial statements in the past. He is also known for fondly reminiscing on Brazil’s two-decade dictatorship that ended in 1985, and he has vowed to increase the role of the military in the government. He is currently polling first, after ex-President Luiz Inácio Lula da Silva has been banned from running.

Polarizing rhetoric and acts of political violence in Brazil have become increasingly common as the first round of presidential elections approach, which will be held on Oct. 8th. This past March, gunshots hit one of Lula’s campaign buses while he was on tour, though he was not in the bus at the time. Two weeks prior, black councilwoman Marielle Franco was shot to death in Rio de Janeiro shortly after attending a black women empowerment event. Some speculate that Bolsonaro may try to use the incident to his advantage in his campaign.

UNITED STATES: The Trump administration is proposing to withdraw from a long-standing court agreement that limits the amount of time migrant children can spend in detention to 20 days, per the Flores Settlement Agreement, which was established in 1997. The administration seeks to remove a limit completely, with the goal of detaining families together until their cases are heard. If passed, the measure would likely be challenged in court.

UNITED STATES: The relatives of three people who died in a May 18 plane crash in Cuba have filed lawsuits in a circuit court in Chicago, claiming the Mexican airline was negligent in training its pilots, causing the crash that killed 112. The Mexican crew and all of the passengers, except one, died. The suits allege that the pilots lost control of the plane due to a poorly-executed take-off. Officials in Cuba, Mexico and the U.S. continue to investigate the cause of the crash.

MEXICO: Mexican investigators announced Thursday they have unearthed 166 skulls in the state of Veracruz in one of the largest mass graves ever discovered in Mexico. The bodies had been buried for at least two years, according to Veracruz state prosecutor Jorge Winckler. Clothes and other bones were also found at the site.

MEXICO: Mexico’s National Human Rights Commission has accused 32 marines of illegally detaining and torturing 17 people between 2013 and 2017. The alleged abuses include sexual assaults, beatings, electric shocks and suffocation. The commission also accused 17 federal investigators of failing to act on the victims’ reports of abuse.

BERMUDA: Meteorologists are watching two storm systems build in the Atlantic Ocean and predict that Hurricane Florence may come close to Bermuda this weekend, which eased to Category 1 Thursday afternoon from a Category 4, the same classification used to describe Hurricane María in 2017. However, forecasters expect the storm to intensify over the weekend and on September 5 the National Hurricane Center said there is a 70 percent chance the storm will develop into a hurricane in the next two days and a 90 percent chance across a five-day forecast.

CUBA: Experts are still baffled at the illnesses of 24 U.S. diplomats in Cuba since 2016 and this week a theory gained traction that microwave weapons were the cause. Multiple scientists told lawmakers Thursday that there is no evidence that such a weapon could have caused the symptoms, which the State Department says are similar to traumatic brain injury. Experts working for the Cuban government suggested the outbreak was a “psychological contagion.” The United States has officially called the health problems attacks, but behind that claim, officials have been unable to trace the sickness or find a plot. Two other U.S. diplomats fell ill in Guangzhou, China and were evacuated this year.

NICARAGUA: U.S. Ambassador Nikki Haley denounced the repression of protesters in Nicaragua in a U.N. Security Council meeting Wednesday, calling President Daniel Ortega a “dictato[r] cut from the same corrupt cloth” as Venezuela’s President Nicolás Maduro. On Tuesday Haley called for the meeting to address the Nicaraguan government’s treatment of protestors, which has resulted in over 300 deaths and thousands of people leaving the country. Earlier this week, the Nicaraguan state ousted UN human rights workers in response to a report that detailed killing, arrest, and legal persecution of demonstrators.

GUATEMALA: Guatemala’s Constitutional Court agreed to hear several appeals against President Jimmy Morales’ removal of the U.N. official leading a corruption probe in the country. The president has two days to submit an argument for the removal of Iván Velásquez, who is in charge of the International Commission against Impunity in Guatemala, or CICIG. If the court rules against the government’s justification, the investigator may be allowed to return. Morales stood by his decision in a speech Thursday.

ECUADOR: Ecuador resumed its anti-drug operations with the United States, as a military plane sent by U.S. Customs and Border Protection conducted its first reconnaissance mission from the Simón Bolívar de Guayaquil air base in Ecuador. The plane is fitted with equipment to detect illicit activity from narcotrafficking to illegal fishing operations. The United States previously conducted an anti-drug base from 1999-2009 until then president Rafael Correa canceled the lease, calling it a threat to Ecuador’s national sovereignty.

BRAZIL: Another corruption charge has been brought against Brazilian President Michel Temer, as federal police filed a report alleging that Temer pocketed around $300,000 in bribes from the Brazilian conglomerate Odebrecht. This is the third time Temer has been charged with corruption since taking office in 2016. He is finishing the term of impeached former President Dilma Rousseff. Temer’s popularity rating is in the single digits, and he is not running in the October presidential elections.

ARGENTINA: The global sex abuse scandal rocking the Catholic Church came to Pope Francis’s home country on Thursday as Argentinian police raided a Catholic-run school for youth with hearing disabilities. Police seized documents dating back more than 30 years to investigate “possible crimes against sexual integrity,” according to an anonymous police officer. This is the third school run by the Antonio Provolo Institute that has been embroiled in the abuse scandal, and the second in Argentina.