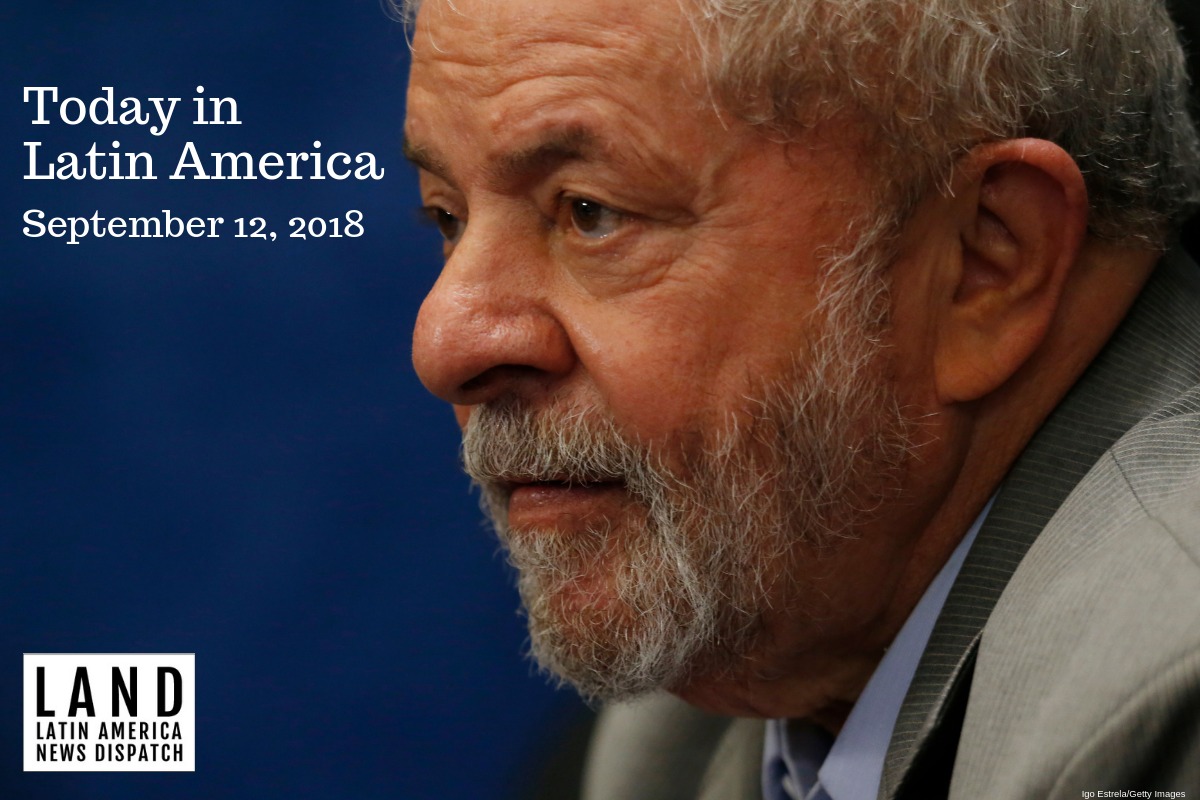 BRAZIL: Imprisoned former Brazilian president Luiz Inácio Lula da Silva has officially withdrawn from the presidential election. He was replaced by the former mayor of São Paulo, Fernando Haddad. The leftist Workers’ Party announced the decision yesterday. Lula’s withdrawal comes as a last-minute announcement after two years of legal discussions and protests to let Lula contend for the presidency while in prison where he is serving a 12-year sentence for charges of corruption.

Meanwhile, far-right presidential candidate Jair Bolsonaro, who is currently leading the polls, will have to undergo major surgery following his stabbing last week, his doctors said. The update on his health comes just two days after doctors said he was “improving markedly.”

MEXICO: After campaigning on an environmentalist platform, President-elect Andrés Manuel López Obrador, known as AMLO, said he intended increasing refinery production. He has plans for a new refinery in the state of Tabasco, stating that it would produce 600,000 barrels of gasoline per day. AMLO plans on investing $9.2 billion in Mexico’s state-run oil and electricity companies, with the goal of spurring Mexico’s declining petroleum production.

MEXICO: Ricardo Monreal Ávila, the Senate coordinator for the AMLO-led Morena party, argued in front of the Senate that drug cartels have been operating in Mexico City for four years. He called it a severe problem in need of coordination, intel, and action against capos from all levels of government, although he did not give specifics beyond that. His plea came in the midst of a violent dispute between three cartels in the neighborhood of Tepito, which has lasted for several weeks.

U.S.: Mexico’s Finance Minister José Antonio González Anaya signaled that Mexico would be open to a bilateral trade pact with the United States if Canada cannot reach a deal on the North American Free American Trade Agreement (NAFTA). Canada and the United States are set to resume talks, particularly around their differences on agricultural policy. Mexico and the United States had already come to an agreement on Aug. 27, after Mexico made significant concessions on automobiles.

PUERTO RICO: The Federal Emergency Management Agency (FEMA) approved more than $9.2 billion to help Puerto Rico in the recovery efforts after hurricanes Irma and María, according to a fact sheet released by the institution. That includes a $3.2 billion investment in debris removal, $7.58 million in unemployment assistance and $2 billion in restoration. FEMA faced criticism after a federal document found that the personnel slowed the recovery process in the island.

NICARAGUA: Nicaraguan student leader Edwin Carcache was brought before a judge after eight days of what activists considered illegal detention. After protesting against the President Daniel Ortega’s government, Carcache was allegedly arrested on his way to a meeting after being followed by local authorities. He’s being charged with eight crimes, including terrorism, kidnap and attempted murder.

GUATEMALA: Guatemala’s Attorney’s Office started an asset recovery trial against former vice-president Roxana Baldetti to retrieve a luxurious property located in the Honduran coast, valued at US$1.2 million. The property was bought by members of the Patriotic Party (PP) through illicit financing with a company established to disguise the PP’s activity, and “gifted” to Baldetti. Officials expect to recover US$27,000 after putting the property up for auctioning.

VENEZUELA: A U.S. Treasury Department official has accused Venezuela of stealing from a state-run food program while the country experiences a food shortage. Marshall Billingslea,  Assistant Secretary for Terrorist Financing, also said Venezuela was overcharging for food. In response, the Venezuelan government has blamed U.S. sanctions for its food crisis.

PERU: President Martin Vizcarra says he is open to the possibility of dissolving Congress if they will not allow a public referendum on anti-corruption measures. The opposition, which holds a majority in Congress, has previously blocked initiatives regarding the cleaning of the legislative and judicial systems. If Vizcarra dissolves Congress, he will be the first Peruvian president to do so since Alberto Fujimori in 1992.

CHILE: Chile commemorated the 45th anniversary of the military coup that overthrew former socialist president Salvador Allende. Chile’s President Sebastián Piñera led a low-profile ceremony at La Moneda palace, while members of the opposition paid tribute to Allende. The Sept. 11, 1973, coup was a decisive moment in Chilean history that gave way to years of human rights abuses under a military dictatorship led by Augusto Pinochet.