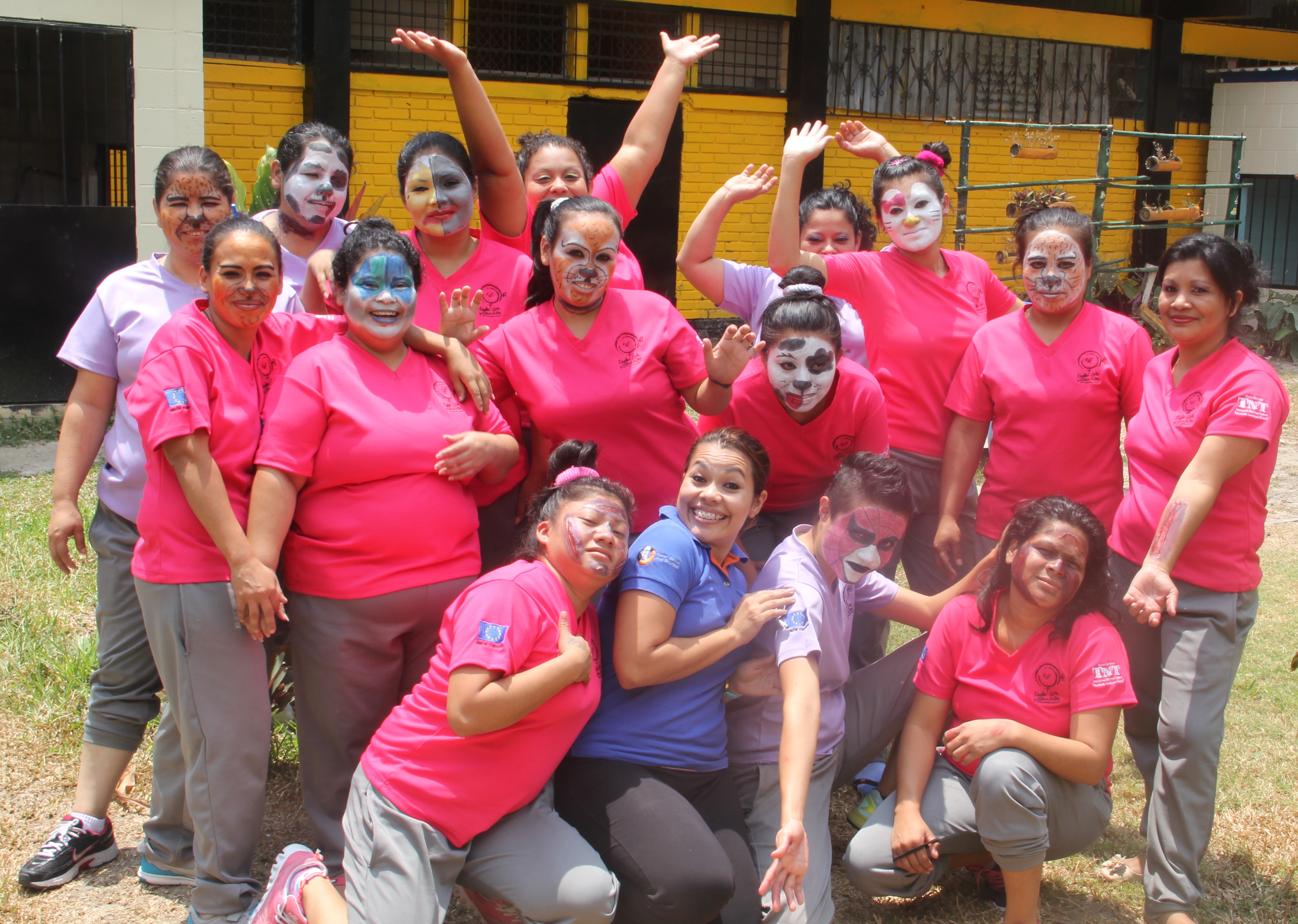 Some of the participants of the program. March 2017. (Photo courtesy of Tiempos Nuevos Teatro)

SAN SALVADOR, EL SALVADOR — April 29 is the hardest day of the year for Cindy Erazo, an inmate at the Ilopango women’s prison on the outskirts of San Salvador. It’s her son’s birthday and she always wakes up feeling sad and irritable. This year, for his 8th birthday, she sent him a stuffed dinosaur as a present. Still, it didn’t take away the feeling of guilt and shame for not being there.

“He’s always going to remember that I wasn’t there,” she said in an interview at the women’s prison.

For years, Erazo kept these feelings inside. She didn’t have anyone to confide in and her usual mode of de-stressing —through music— was unavailable. But recently, she has found a new way to release her pent-up frustration, anger and sadness. Through a theater and arts program for inmates, the 26-year-old mother is learning to cope with a situation in which she often feels powerless.

“Now I don’t hold on to these feelings, but rather I express them,” said Erazo, part of a group of women known as “Las 17” (“The 17”) who have been imprisoned for abortion or aggravated homicide because of the country’s harsh abortion laws.

“It’s a way of stepping into oneself. So often, we are here, but we are not really present,” she added.

El Salvador has one of the highest prison to population ratios in the world, second to only the U.S. The number of incarcerated women in the country has increased fourfold in the past decade as gang violence has intensified, along with a harsh, punitive government response. The growing female prison population in El Salvador mirrors a trend throughout Latin America as more women have been imprisoned for low-level drug offenses.

Incarcerated women in El Salvador are overwhelmingly from poor, marginalized communities. The majority have been the victim of violence or abuse before entering the prison.

Theater, dance, and arts programs have been proven as an effective way of dealing with trauma, particularly among incarcerated women. These programs have sprung up from Afghanistan to Chicago, where the participants have reportedly been able to reclaim their own voices, gain more self-confidence, and experience the therapeutic benefits of theater, dance, and music.

While strict mano dura (tough-on-crime) laws have been the policy of choice for dealing with crime in El Salvador, a community theater group Tiempos Nuevos Teatro (New Times Theatre, shortened as TNT) is trying to change this mentality.

The program was founded in 1993 in Chalatenango, an area of intense conflict during the country’s 12-year civil war that ended in 1992. The program was developed to deal with the trauma that survivors of the war faced. In 2016, the theater company expanded the program to several women’s prisons, with a focus on addressing the emotional and psychological needs of these women.

“An opportunity arose to develop processes with the same concept that we’ve been doing on a community level, mostly in rural communities,” said Julio Monge, one of the founders of TNT.

“About three years ago, we expanded this concept of community to an incarcerated population. Now we guide this population in the same way through art that is liberating and healing, which we believe contributes to reconstructing the social fabric,” he added.

A group of 25 inmates meets once a week for improv skits and theater rehearsals. In February 2018, TNT expanded the programming to include Biodanza, a class that uses movement to help the women connect with their bodies and de-stress.

Cinthia Rodriguez, 29, another member of “Las 17,” is 10 years into her 30-year sentence. In her first years in prison, she didn’t trust anyone, and instead isolated herself. But the TNT program, particularly Biodanza, has changed that.

“It taught me to have confidence in myself, so that I could be able to trust other people,” she said.

Now, she has formed stronger friendships, becoming one of the most outgoing members of the group. She has taken on the unofficial role of make-up artist for the group’s productions, a task that she takes pride in and increases her sense of self-confidence.

In December 2017, family members of TNT participants filled the auditorium at one of the biggest convention centers in El Salvador to watch a reenactment of “Mamma Mia!” A 65-year-old inmate, Evelyn de Rosario Hernandez de Torres, played the supporting role of Tanya, who she describes as a “viejita loca” (“crazy old lady”).

She was full of nerves, which she said disappeared when she got on stage.

“It gave us a lot of satisfaction, because we learned that what you propose, you can achieve,” she said.

The show was the only time in six years that Hernandez de Torres was able to leave Ilopango prison and see her now-adult children. It was a rare chance to lift the spirits of these women whose time behind bars often seems bleak and hopeless.