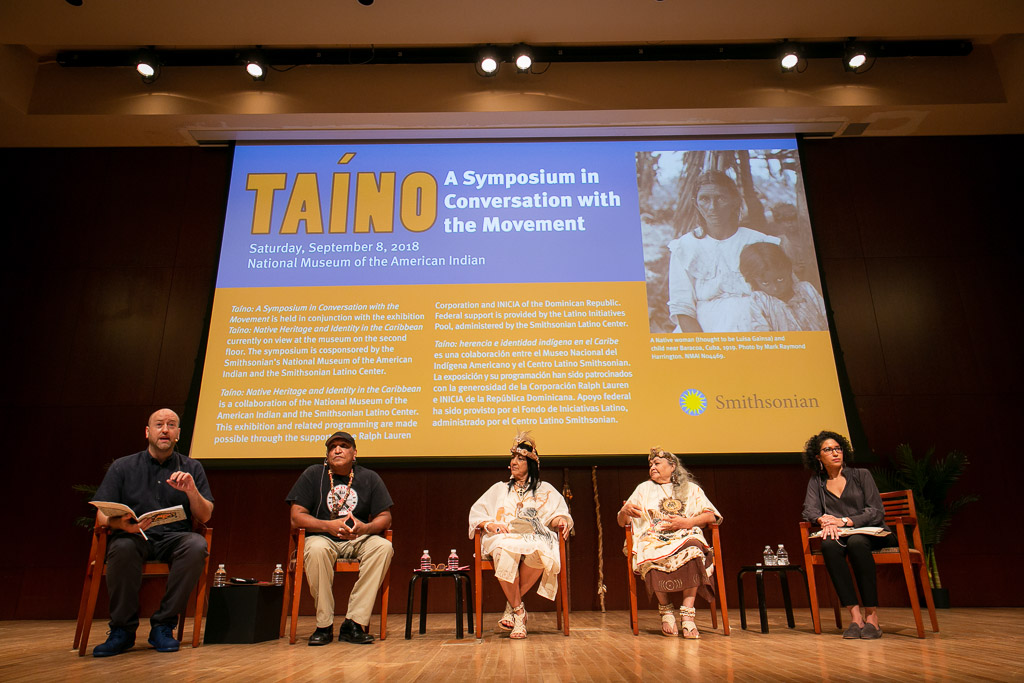 Panelists during the first panel at "Taíno: A Symposium in Conversation with the Movement.” (Photo by 5th Avenue Digital/SLC)

On Saturday, September 8th, the National Museum of the American Indian (NMAI) in Lower Manhattan hosted “Taíno: A Symposium in Conversation with the Movement.” The event was organized to coincide with the recent opening of the exhibit “Taíno: Native Heritage and Identity in the Caribbean,” this past July.

The exhibition, a collaboration between the NMAI and the Smithsonian Latino Center (SLC), serves as an introduction to the contemporary Taíno movement of the past forty years. In an article for the Fall 2018 issue of NMAI’s magazine, Christina M. González, a PhD student at the University of Texas in Austin and exhibit collaborator, described the movement as a “collective effort mostly by diasporic Caribbeans from the islands of Puerto Rico, the Dominican Republic, and Cuba, to explore and illuminate Native Caribbean survivals, and to organize around and assert Taíno identity and worldviews.”

Exhibition curator Ranald Woodaman, during a guided tour, added that the Taíno exhibition was only a first step, among other things, toward creating a framework to understanding Caribbean history; one that, he said, is by no means exhaustive with respect to the exclusion of countries like Haiti and Jamaica. He told Latino USA that it would’ve required more galleries and chapters to include all countries that form part of the Taíno universe.

“Early plans for the exhibition envisioned a more geographically expansive story that covered Indigenous peoples and their legacies across the whole of the Caribbean, including places like coastal Central America and Trinidad,” Woodaman told Latino USA. “As the exhibition developed, we were required to tighten our scope, leading to a focus on the Spanish-speaking Caribbean islands and their U.S. diasporas.”

For many the symposium, and the exhibit, marked a historic moment in the Taíno movement and the history of the Taíno people.

“The significance of this recognition is really big,” said Jorge González, one of the symposium attendees. González is a Puerto Rican artist whose current installation at the Whitney Museum, Ayacabo Guarocoel, draws on Taíno influences. “It’s a glimpse into an effort that has been sustained in community, oriented toward transmitting an honest expression of actively participating in the decisions that are made in our homeland.”

The first panel featured several elder organizers and community leaders of the Taíno movement, including Jorge Estévez of Grupo Higuayagua, a pan-Taíno cultural organization. Estévez recalled much of his personal trajectory, from his early experiences attending Native American pow-wows to his involvement with various Taíno groups in the New York City area.

“We’re different groups, but the reality is we’re one group,” Estévez told the crowded auditorium.

This message of solidarity was echoed by Elba Anaco Lugo, who is considered one of the originators of the Taíno movement in Puerto Rico. Her cultural group, Paseo Taíno, was founded in 1978 and is among the first groups to revive the indigenous culture of the island.

“In me, that [Taíno] essence was alive,” Anaco Lugo asserted, dressed in traditional clothing in honor of her ancestors. During her speech, she spoke of countering the ‘myth of extinction’ that had been established by conquerors and Western knowledge alike.

As with many of the panelists, it was a heritage derived from an older generation that had informally allowed her to maintain Taíno traditions and knowledge. Valeriana Shasira Rodríguez of Consejo General de Taínos Borincanos likened her ancestral knowledge to that of a “book without pages.” Her words were later met with a standing ovation and a chorus of horns as she gave an impassioned plea to protect the land in Puerto Rico.

“This land is not to be gifted, nor sold,” she said.

Skepticism and Lack of Information

After expressing her initial skepticism toward the Taíno movement —a sentiment that panelists said often manifests in dismissive attitudes and ridicule— linguistic anthropologist Sherina Feliciano-Santos of the University of South Carolina shared a presentation derived from her research into the linguistic continuity of the Taíno language, which falls under the Arawak language family. Words like hurricane and hammock, which appear one of the walls of the exhibition, were just some examples of how the Taíno language has survived into the present.

Scarcity, however, was a recurring topic with regard to Taíno heritage in the Caribbean, with Dr. Feliciano-Santos noting that there were only limited resources referencing the Taíno language. And while comparative research to Arawak languages still in existence is helpful in terms of things like recovering syntax, the essence of the language could also be transmitted. “It’s not just what is said, but how it’s said,” she explained, in reference to communication rooted in Taíno linguistics.

Beyond language, diverse and fluid notions of Taíno identity set the stage for much of the discourse of the second panel, which focused on genetics and genealogy. Deborah Bolnick, for example, warned of the danger that genetic testing can pose when used to validate or invalidate ancestral knowledge, history, identity, and so on. Genetic anthropologist Jada Benn Torres, in turn, described DNA testing as a potential means to dividing or building community, while citing her research in the English-speaking Caribbean and parts of Puerto Rico.

Carlalynne Yarey Meléndez then summarized the work she has done with Naguake, an indigenous revitalization project started in 2004 that extends to 13 municipalities across 49 barrios in Puerto Rico. Similar to Dr. Feliciano-Santos, her research aims to prove the cultural —rather than linguistic— continuity of the Taíno legacy. Five years of fieldwork were used to develop the Naguake curriculum, which focuses on identity, linguistics, and ethnography. Genetic testing, moreover, was an important catalyst in furthering the project.

Yet Meléndez stopped short of encouraging students to identify as Taíno or indigenous, so as not to circumvent what she described as the reality of mestizaje, in which African and European heritage are more prominent in the genetic hierarchy of Puerto Rico.

The final panel of the afternoon reaffirmed much of the discussion of the opening panel, such as the value of native knowledge as it pertains to food sovereignty and natural medicine. This was especially relevant in the case of Puerto Rico one year after Hurricane María, with sustainability, ecology, and agriculture bridging the Taíno movement to the reconstruction effort.

Overall, the symposium struck a balance between voices of the Taíno movement and an academic setting, including a brief musical presentation and several dedications to native ancestors. Going forward, José Barreiro, Assistant Director for History and Culture Emeritus at the NMAI and a prominent researcher into Cuban indigeneity, called for a more inclusive movement, one that cast notions aside of purity and authenticity.

“Like the wind,” he noted, “identity is of itself.”

“Taíno: Native Heritage and Identity in the Caribbean” will be on display at the NMAI through October 2019. An edited video of the symposium, with subtitles, will be uploaded by the Smithsonian Latino Center at a later date.