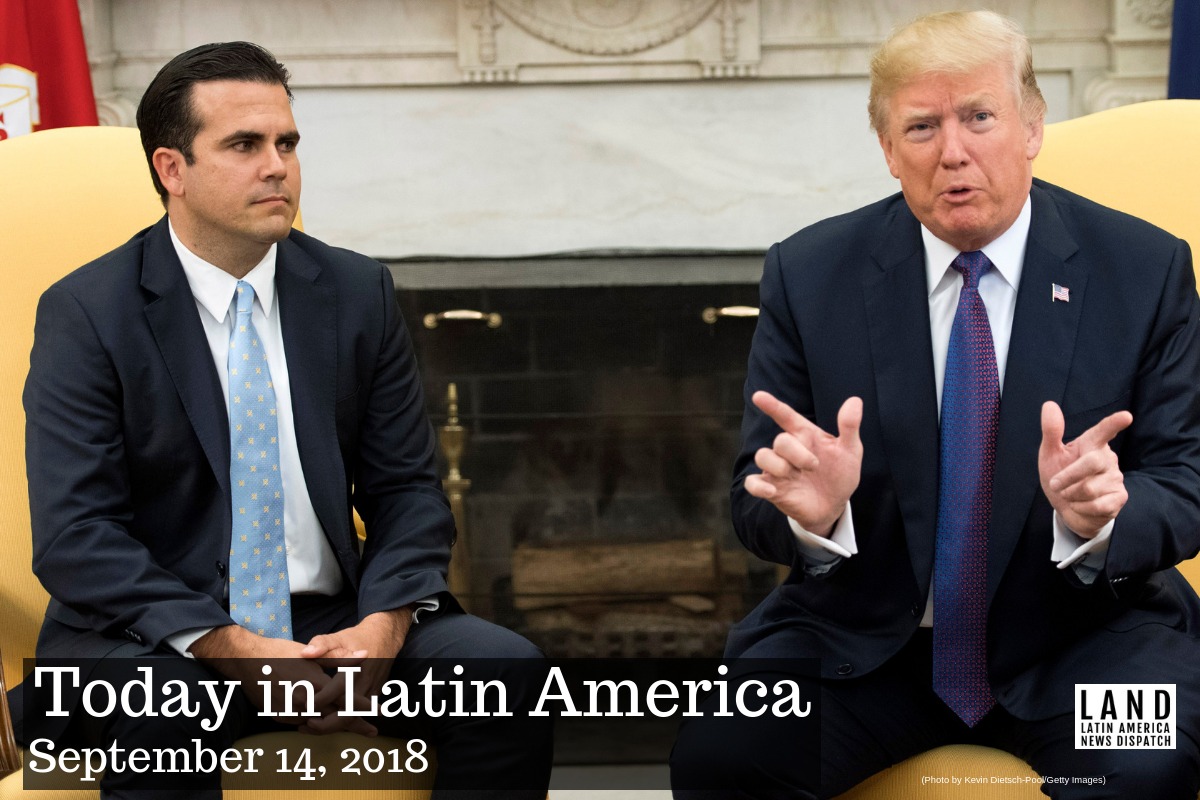 President Donald Trump speaks with Governor Ricardo Rosselló of Puerto Rico during a meeting in the Oval Office at the White House on October 19, 2017 in Washington, D.C. (Photo by Kevin Dietsch-Pool/Getty Images)

UNITED STATES: President Donald Trump lied about the death toll of Hurricanes Irene and Maria, claiming that “3000 people did not die” in Puerto Rico, as multiple independent studies have found. In an early morning Twitter rant Thursday, Trump falsely claimed that only “6 to 18” had died when he first visited the US territory in October 2017, two weeks after Hurricane Maria. Reports from journalists and comments from some Puerto Rican health officials had already indicated a much higher death count by then. Trump also claimed, without proof, that reports of “large casualties” were “done by the Democrats in order to make me look as bad as possible” and included the deaths of people who “died for any reason, like old age.”

…..This was done by the Democrats in order to make me look as bad as possible when I was successfully raising Billions of Dollars to help rebuild Puerto Rico. If a person died for any reason, like old age, just add them onto the list. Bad politics. I love Puerto Rico!

Despite mounting evidence that the federal response to Maria was slow and inefficient, Trump continues to laud his administration’s handling of the disaster, calling it an “underappreciated great job” as recently as Monday. Instead, Trump has blamed local authorities like San Juan Mayor Carmen Yulín Cruz, a prominent critic, for the pace of relief. Top Democrats have promised to investigate FEMA’s performance should they win back the House in November. While several similar inquiries were launched following Hurricane Katrina in 2005, the Republican-controlled House has thus far refused to act. On Thursday, Speaker Paul Ryan said, “Casualties don’t make a person look bad. So I have no reason to dispute” the George Washington University study that found 2,975 people died as a result of Maria.

MEXICO/UNITED STATES/CANADA: Economic Minister Ildefonso Guajardo reiterated Mexico’s preference yesterday for a trilateral trade agreement to replace NAFTA. Mexico and the U.S. already reached a new deal in talks last month, but Canada has yet to come to terms with its southern neighbor. In recent days, President Trump has suggested that Canada could be cut out of a deal, threatening to impose tariffs that lead to its economic “ruination.”

MEXICO: Wixárita activist Margarito Díaz González was killed last week in the western state of Nayarit, federal human rights officials acknowledged Wednesday. A community representative and spiritual authority, Díaz was leading the defense of sacred Wixárita territories from a planned dam-construction project. He was reportedly shot in his home, the latest in a series of targeted attacks against Mexican land-rights activists.

TRINIDAD AND TOBAGO: The ruling People’s National Movement party is calling on opposition leader Kamla Persad-Bissessar to apologize for referring to Prime Minister Dr. Keith Rowley as an “Oreo.” In a statement, the party characterized the term, a slur used to refer to African-descendent people with stereotypically white behaviors and backgrounds, as “racist, vile and disgusting.” Herself a former prime minister, Persad-Bissessar is of Indian descent.

CUBA: U.S. and Cuban officials met at the State Department building in Washington, D.C. yesterday to discuss the mysterious, concussion-like symptoms embassy staff in Havana began experiencing in 2016. Recent reports have suggested that sophisticated microwave weaponry may have induced the symptoms, though a State Department spokesperson said following the meeting that no definitive cause has been determined. Cuban officials, for their part, have repeatedly denied such claims.

COSTA RICA: Protests continued for a fourth day against a planned tax increase, with health sector employees marching to the Legislative Assembly in San José. The protests, which include a general strike of health and labor groups, originated in opposition to a new deficit reduction law that would allow the government to collect taxes on services as well as just sales. Recently inaugurated President Carlos Alvarado initially said he hoped to declare the strikes illegal, though no such designation has yet been made.

COLOMBIA: The U.N. Security Council unanimously adopted a resolution yesterday urging Colombia “to renew momentum” of the peace process with the Revolutionary Armed Forces of Colombia. The resolution extends the U.N.’s peace monitoring mission until September 2019, as had been requested by incoming Colombian President Iván Duque. On Wednesday, the National Liberation Army, a smaller rebel group, freed six hostages in an effort to restart its own stalled peace talks with the new government.

VENEZUELA: A judge in the independent European tax haven of Andorra indicted 14 former Venezuelan officials yesterday on charges that they laundered over $2 million from the state-owned PDVSA oil company between 2007 and 2012. The indictment also included 14 defendants from France and Andorra, where the money was allegedly deposited. The embezzlement scheme was allegedly orchestrated by Diego Salazar, a powerful businessman and cousin of former Venezuelan oil czar Rafael Ramírez.

CHILE: Authorities raided four Catholic dioceses yesterday as the result of an investigation into sexual abuse and alleged coverups. More than 100 clergy are currently being investigated in relation to the widespread abuse, which was allegedly covered up by Chilean bishops. Thursday’s surprise raids took place in Valparaíso, Chillán, Osorno and Concepción.

CHILE: After five years of intense debate, Chile’s lower legislative house passed a gender identity law Wednesday that allows teenagers as young as 14 to legally change their names and gender identities. Minors would require the permission of a guardian in order to do so. Newly elected center-right President Sebastian Piñera, who was serving a previous term in office when the law was originally introduced, is expected to back the measure, though conservative lawmakers have vowed to challenge it before the Constitutional Court.

Checking Up On The Clinic During COVID-19