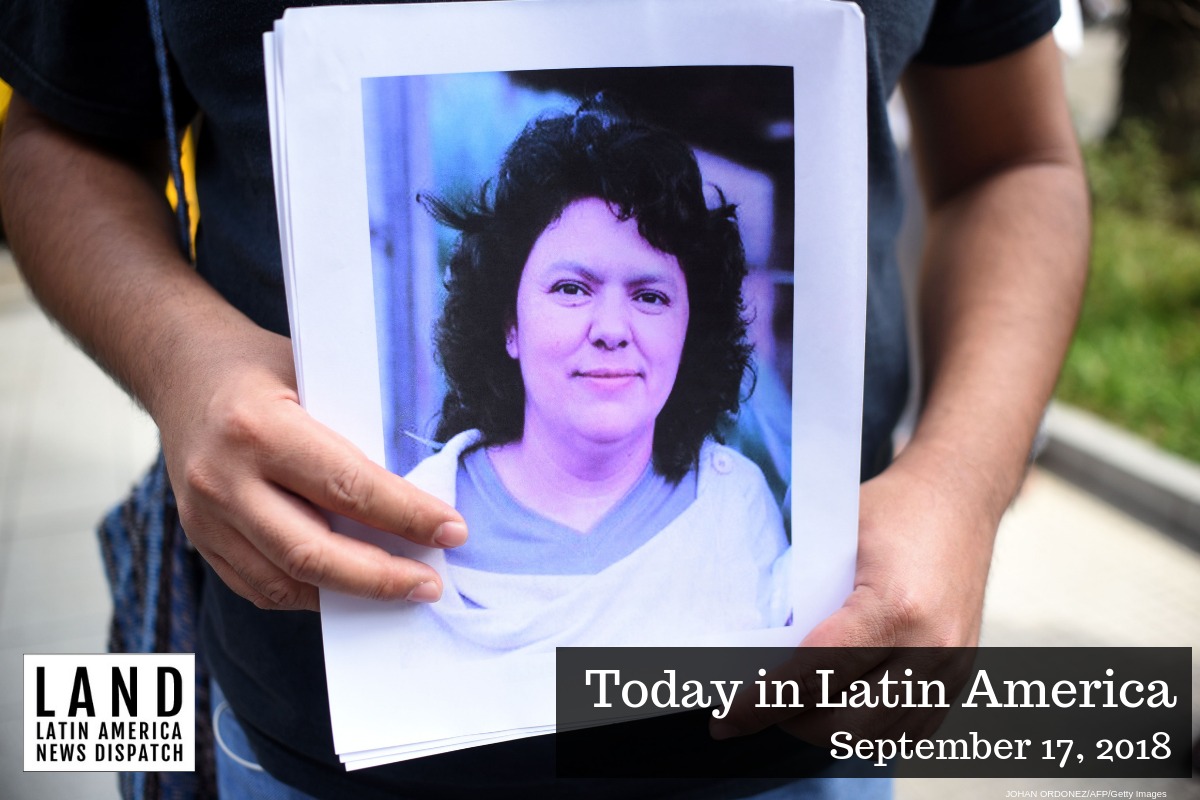 HONDURAS: Starting today, the alleged murderers of indigenous leader Berta Cáceres will stand trial in Tegucigalpa, in a case that seeks justice for one of the most notorious killings of environmental activists in Central America. In March 2016, Cáceres was shot dead in her house a week after opposing the construction of the Agua Zarca hydroelectric dam.

At least four of the eight men accused of participating in the shooting have been linked to Desarrollos Energéticos, S.A. (DESA), the company licensed in the development of the dam, and the Honduran Armed Forces. Previous investigations suggest Cáceres’ name appeared on a military hit list months before her murder.

Cáceres was a member of the Lenca people, the largest indigenous community in Honduras. She was also a prominent human rights activist and a 2015 Goldman Environmental Prize winner. The trial against her executioners is expected to conclude on October 19.

MEXICO: On Saturday night, five gunmen disguised as mariachis at Mexico City’s iconic square, Garibaldi Plaza, killed five and wounded eight before fleeing on motorcycles. While investigators tried to pin down the attackers, festivities for Mexico’s Independence Day continued as planned and musicians proceeded to play. Security experts believe the ambush may be linked to a gang turf war.

MEXICO: Mexican president-elect, Andrés Manuel López Obrador, introduced his new head of security, Daniel Asaf, in an unconventional move to hire unarmed and untrained bodyguards. It was the first of many days that Daniel Asaf will be surveilling López Obrador’s nationwide tour. Asaf, a Lebanese-born restaurateur, will be in charge of 20 rotating civilian assistants who will help the president-elect engage with voters without being trampled. López Obrador rejected the use of 8,000 trained security guards traditionally hired to isolate the president from crowds.

UNITED STATES: Víctor Hugo Cuéllar-Silva, a Colombian drug trafficker who reports to Mexican kingpin Ángel Humberto Chávez-Gastelum, was indicted on federal drug trafficking charges in Los Angeles on Friday. Almost 50 people are being charged for shipping 7,700 pounds of cocaine into the U.S. Authorities uncovered the drug in speedboats, submarines, a private jet and in frozen orange juice cubes. Cuéllar-Silva pleaded not guilty and is being held in custody.

EL SALVADOR: El Salvador’s prosecutors requested to extradite former President Mauricio Funes on corruption charges last Friday. Funes, who served with the leftist FMLN party between 2009 and 2014, is accused of embezzlement and money laundering involving over $351 million. This comes after Funes’ predecessor, Antonio Saca, became the first Salvadoran president to be given prison time after pleading to similar charges.

COSTA RICA: Today marks the seventh day of general labor strikes in Costa Rica. Demonstrators took to the streets of San José and other cities to protest a fiscal bill proposed by newly-elected President Carlos Alvarado. The tax reform would convert the 13 percent sales tax to a “value-added tax,” affecting several products and services. Alvarado has called on the church and university officials to mediate in this conflict, but students and public sector employees have called for an indefinite strike.

COLOMBIA: A leader of one of FARC’s largest dissident groups was seriously injured Saturday when he was attacked by the Colombian army near the Ecuador border, President Iván Duque said. Walter Arizala, also known as “Guacho,” is one of the most sought-after rebel leaders. As the head of the Oliver Sinisterra Front, Arizala has been linked to car bombings, kidnappings, and the murder of several journalists in Colombia and Ecuador.

CHILE: Pope Francis expelled a Chilean priest accused of child sexual abuse Saturday. The priest, Cristián Precht, was a central figure in the fight against dictator Augusto Pinochet. In the 1970s, Precht tried to put an end to torture practices in the country. His expulsion is the latest development in a global sex abuse scandal that has rocked the Catholic Church.

ARGENTINA: Argentine authorities announced the seizure of $3 million worth in cameras, lenses, screens, microphones, and other film equipment stolen from Hollywood and New York after carrying out 10 raids on Thursday. This is the conclusion of a two-year operation called “Hollywood Stolen.” The thieves stole the equipment from Hollywood producers and rented it out on the black market in Argentina, according to the Federal Police.